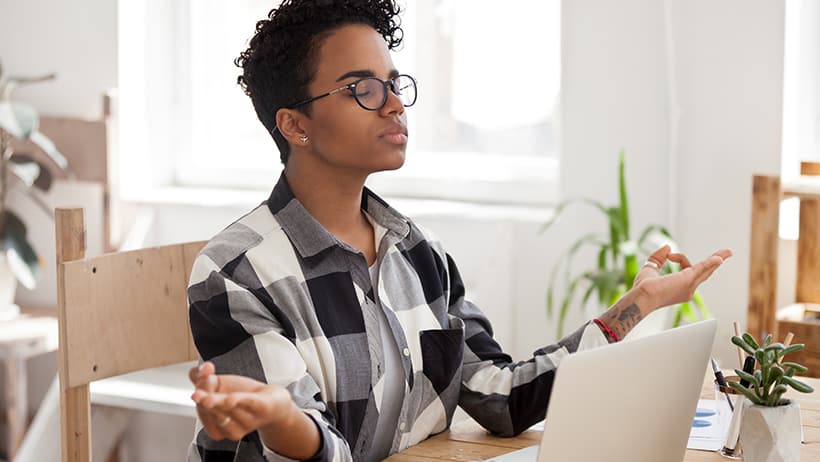 Meditation is a uniquely human ability which enables us to experience spiritual bliss. By directing our consciousness to the Absolute Truth, we become charmed. We fall in love with God. That “fall” leads upward to the strongest, and most spontaneous kind of meditation.

The Ocean of Ecstasy

An ancient bhakti-yogi, Narada, tells how his meditation led to ecstatic love:

“After that, under the shadow of a banyan tree in a forest without any human habitation, I began to meditate upon the Supersoul situated within myself, using my intelligence as I learned by hearing from liberated souls.”

“With my mind transformed into transcendental love I began to meditate upon the lotus feet of God. Tears rolled down from my eyes, and immediately Krishna personally appeared on the lotus of my heart… every part of my body then became lucid, absorbed in the ocean of ecstasy.”

The Principle of Attraction

Reading about meditating in an uninhabited forest under a banyan tree can be hard to relate to. How can we meditate today in such a different environment? In order to rise above today’s challenging settings and meditate, it can help to leverage the power of attraction.

Attraction is a force of nature. When we’re attracted to the energy of the Absolute Truth without considering its source, the gravity of that attraction brings down an avalanche of material nature which covers our consciousness. This cascade is traced in Bhagavad-gita 2.62-63:

While contemplating the objects of the senses, a person develops attachment for them, and from such attachment lust develops, and from lust anger arises.

Alternatively, if we become attracted to the Absolute Truth, or God, then instead of falling down, we fall in love and are lifted up. The Absolute Truth has a name, Krishna, which means “The all-attractive one”. Krishna explains how spiritual attraction also begins with contemplation:

Being freed from attachment, fear and anger, being fully absorbed in Me and taking refuge in Me, many, many persons in the past became purified by knowledge of Me—and thus they all attained transcendental love for Me.
(Bhagavad-gita 4.10)

Attraction then acts as a medium by which meditation becomes charged with bhakti.

Bhakti and Other Yoga Paths

Meditation is a common feature in all yoga paths. In karma-yoga, our work is sandwiched between meditation sessions. In jnana-yoga our knowledge is founded on experiencing the Absolute Truth through meditation, and in bhakti-yoga, our love produces constant meditation.

All yogas lead to bhakti, or approaching God through devotion. In brief, the reason there are different yoga paths is to attract souls from different backgrounds, and lead them to bhakti, which is the goal of all meditation. There is a logic unifying all yoga paths as outlined below:

One who engages in full devotional service, unfailing in all circumstances, at once transcends the modes of material nature and thus comes to the level of the Absolute Truth.

One who is factually convinced of this opulence and mystic power of Mine engages in unalloyed devotional service; of this there is no doubt.
(Bhagavad-gita 10.7)

The Perfection of Yoga

In the sixth chapter of Bhagavad-gita, Krishna describes the meditational yoga system in detail. In the final verse (47) of that chapter, the word bhajate is used to tell us that bhakti is the system’s ultimate goal:

And of all yogis, the one with great faith who always abides in Me, thinks of Me within, and renders transcendental loving service to Me, is the most intimately united with Me in yoga and is the highest of all. That is My opinion.