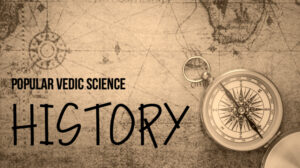 The Western worldview, dominated as it is by the Abrahamic faiths — Judaism, Christianity, and Islam — understands history in a linear way. The Vedas, however, explain that time is cyclical. Our present time in history is a repetition of similar events that have happened in previous ages in the universe, known as yugas. Newton’s discovery of the conservation of energy shows us that, in reality, nothing truly ever begins or ends: matter is simply rearranged.

The four yugas are the cosmic ages used for measuring universal time. Each one follows the other, just as spring follows winter, summer follows spring, and so on, in an endless succession. The names of the four yugas are Satya, Treta, Dvapara, and Kali, and combined they last a total of 8,640,000 solar years. The Vedic presentation of history is astounding. Its records go back more than a billion years, and its units of time encompass the entire lifespan of the universe.

The Hindu religion is the only one of the world’s great faiths dedicated to the idea that the Cosmos itself undergoes an immense, indeed an infinite, number of deaths and rebirths.

It is the only religion in which the time scales correspond to those of modern scientific cosmology. Its cycles run from our ordinary day and night to a day and night of Brahma, 8.64 billion years long. Longer than the age of the Earth or the Sun and about half the time since the Big Bang.

The Big Bang in the Vedas

The Vedic Puranas of ancient India describe that the universe is perpetually created and annihilated in an endless cycle. This does not happen randomly — it is initiated directly by Vishnu, the Supreme Being, who is an avatar of Krishna.

The Puranas contain accurate accounts of the lifespan of the universe, the date of the “Big Bang,” the origin of the sun, and many more historical and cosmological events.

Check out this book: The Big Bang and the Sages

The Vedic texts follow a lunar calendar. The sun and moon both follow the same course through the zodiac — the 12 major divisions of the night sky — but while the sun takes approximately 365 days to pass through all 12 signs, the moon moves through them in just over 27 days. This is one lunar month, and twelve lunar months makes one lunar year.

Below you will find some of the most important events that take place every year in the Vedic calendar.

As the Absolute Truth and origin of everything, God contains everything that exists. This includes personality, desire, form, and all the other aspects of personhood. That’s what it means to be the Supreme Person, or in Sanskrit, the parama-puruṣa.

Explore more about the 4 yugas and important personalities in history below.