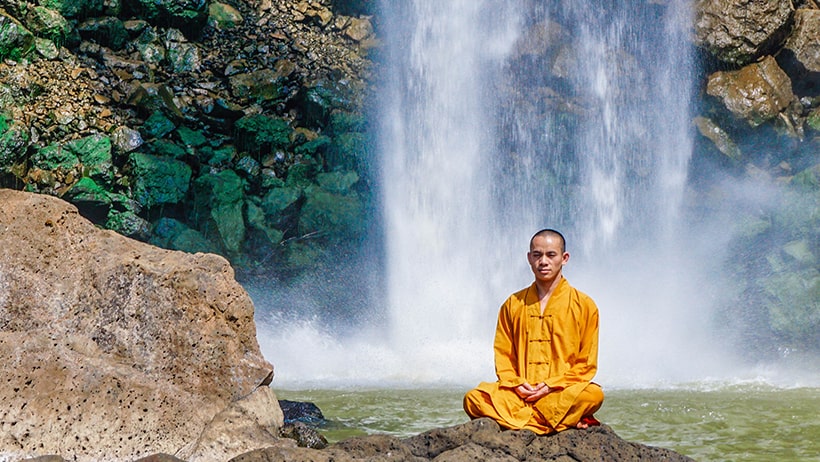 Enlightenment, or samadhi, is the final of the eight stages of ashtanga-yoga system. This advanced state of consciousness marks the end of negative mental cycles. With these obstacles removed, we can freely focus the mind on the Absolute Truth.

The yoga-sutras of Patanjali describe the ashtanga-yoga system, and identify samadhi, or enlightenment, as the most advanced stage. Each of the eight yoga stages build on the previous ones, so touching on a bit of general yoga philosophy will provide us a useful context.

Enlightenment as Self-Realization
Before Patanjali even mentions the first of the eight stages, he points out the meaning of yoga and how we benefit from it. In the third sutra of the samadhi section, he states:

tada drashtuh svarupe-‘vasthanam
Then you, the witness, become situated in your own true form.

The traditional Sanskrit dictionary called the Nirukti breaks down the word samadhi, revealing how its very syllables indicate a similar meaning:

samyag adhiyate ‘sminn atma-tattva-yathatmyam
When the mind is fixed for understanding the self, it is said to be in samadhi.

In the next sutra, Patanjali goes on to state the alternative to enlightenment:

vritti sarupyam-itaratra
Otherwise, you take on the same form as your negative mental cycles.

He points out five of these mental cycles:

Each of these five are normal functions, but when they are taken to extremes, they distract our minds from the goal of yoga, which is to revive our conscious awareness of the Absolute Truth, or God. Here are some ways each of these can spin out of control:

Yoga works through sincere efforts, self-control, and letting go of the idea that we’ll find happiness apart from the Absolute Truth in the things we see, hear, taste and so on. It leads to samadhi, or knowledge of our identity as souls, and frees us from the modes of material nature.

This knowledge of the self, the purusha, is achieved by some yogis through processes like:

Thinking, feeling and decision-making can be connected with the Absolute Truth. As we experience things in that divine connection, our consciousness remains unaffected by them. The enlightenment found in the above processes is referred to as savikalpa-samadhi.

Other practitioners focus first on stopping problematic mental cycles and habits. We each have a unique set of mental challenges, and they grow from underlying emotional triggers called samskaras. Addressing these challenges can protect us from being triggered by our pet peeves.

These yogis experience the enlightenment known as nirvikalpa-samadhi.

Seeing distinctions (viveka) between matter and spirit, the soul and God, actions that lead to happiness and those which lead to misery — These and other vivekas promote pure self-understanding and prevent resurgence of our underlying emotional triggers, or samskaras.

When we make spiritually informed distinctions, we benefit from varieties of knowledge. If we refuse to exploit others with this knowledge, our enlightenment is of a greatly virtuous kind, or dharmamegha-samadhi. Troublesome actions cease then, and we serve others in knowledge.

When we practice yoga with great intensity, our approach leads to samadhi very quickly; however, there are practitioners at all levels, some soft, some moderate, others highly motivated. Patanjali also mentions that samadhi can be attained simply by dedication to God.

Samadhi in the Bhagavad-gita

Another classic yoga text is Bhagavad-gita. In 2.52, Arjuna asks by which characteristics enlightenment, or samadhi, can be recognized:

Arjuna said: How do the steadfast in knowledge speak? What is the language of these enlightened beings, Kesava? How do those of spiritual intelligence sit, and how do they walk?

Kesava, or Krishna, replies in the following four verses:

The splendid Lord said: Partha, when someone gives up all varieties of desire for sense gratification, which arise from mental concoction, and when the mind, thus purified, finds satisfaction in the self alone, then one is said to be in pure transcendental consciousness.

One who is not disturbed in mind even amidst the threefold miseries or elated when there is happiness, and who is free from attachment, fear and anger, is called a sage of steady mind.

In the material world, one who is unaffected by whatever good or evil is obtained, neither praising it nor despising it, is firmly fixed in perfect knowledge.

One who is able to withdraw the senses from sense objects, as the tortoise draws its limbs within the shell, is firmly fixed in perfect consciousness.

The nature of the soul is to seek pleasure. Unless we go within and discover our innate spiritual bliss, we’ll find temptations everywhere we look. These can distract us from our enlightened relationship with the Absolute Truth, or God. Krishna makes this point next:

Though the embodied soul may be restricted from sense enjoyment, the taste for sense objects remains. But ceasing such engagements by experiencing a higher taste, one is fixed in consciousness.

Finally, in the next verse, Krishna identifies the higher taste we need in order to control our senses and quell the negative mental cycles which keep us from enlightenment:

One who restrains the senses, keeping them under full control, with consciousness fixed upon Me, is steadfast in spiritual intelligence.

Later in the sixth chapter of Bhagavad-gita (20-23), Krishna gives an extensive and soulful description of samadhi. Meditating on this description is a powerful source of inspiration for yogis on the journey of enlightenment:

In the stage of perfection called trance, or samadhi, one’s consciousness is completely restrained from material mental activities by practice of yoga. This perfection is characterized by one’s ability to see the soul by the soul and to relish and rejoice in the soul. In that joyous state, one is situated in boundless transcendental happiness, realized beyond the senses. Established thus, one never departs from the truth, and upon gaining this, thinks there is no greater gain. Being situated in such a position, one is never shaken, even in the midst of the greatest difficulty. This indeed is actual freedom from all miseries arising from material contact.