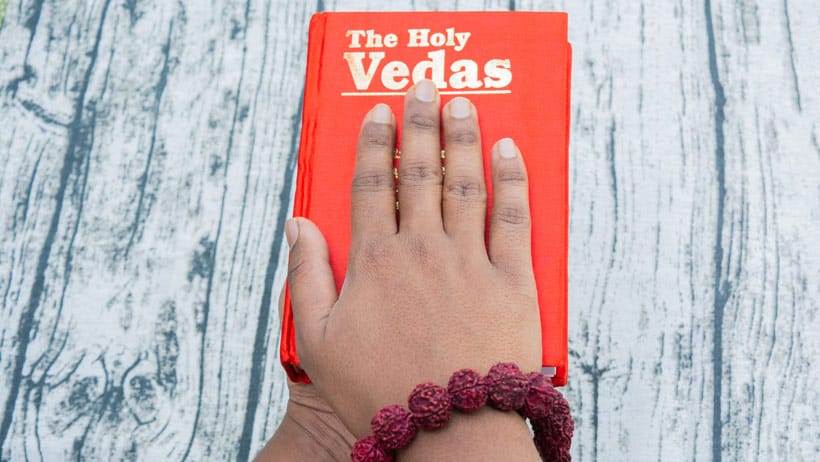 The literal meaning of the word veda is knowledge. The Vedas are a body of sacred texts containing information on a vast array of topics, ranging from music to architecture, from warfare to spiritual knowledge. Composed in Sanskrit, these texts provide a comprehensive guide to virtually all areas of human culture. In this way they act as a “user manual” for human life.

When most scholars refer to the Vedas, they are speaking of the primary Vedic literature which has four main parts: Rig Veda, Sama Veda, Yajur Veda, and Atharva Veda. These sacred texts are also known as the sruti. However, the Vedas also include smrti texts, including Puranas, Itihasas, and corollary literatures.

In this article we’ll look at what the Vedas are, and many different ways in which this knowledge can benefit us.

The Vedas are the sonic form of the Absolute Truth, and as such, the knowledge they embody is true in all times, places and situations. Ordinary knowledge is not false, but it is always relative. For example, a campfire is usually regarded as hot, but not when compared to the sun’s plasma.

Knowledge arrived at through sense perception, and the logic based on it will always be relative because it is limited to a thin slice of reality. This picture of reality may well be extended by instruments, but the Vedas are God-given gifts to experience otherwise inaccessible knowledge.

Top Ten Teachings of the Vedas

The Vedas are vast. They cover all the branches of knowledge necessary to rise above the control of nature, karma, reincarnation and other limitations on our spiritual freedom. To study them all in a single lifetime is impossible, to say nothing of fitting everything in a single article.

The Vedas themselves address the necessity of summarizing their essential teachings. There are single verses, groups of verses, books and commentaries, all of which present the must-see messages of the Vedas. Here are ten teachings of the Vedas everyone should know:

Why Accept the Vedas?

There are primarily three methods we use to get knowledge:

The Vedas are viewed as the mother of creation, and learning from them occurs by accepting their authority. This knowledge is accepted as being fully correct even if it isn’t always corroborated by our direct perceptions or logical assumptions. It delivers the Absolute Truth.

How are the Vedas Taught?

Originally the Veda was one body of knowledge passed down by word of mouth from student to teacher. In ancient times, before computers, cell phones, and fountain pens, students learned by hearing and memorizing their lessons. Although it may seem impossible today, it was not uncommon for students to learn by rote tens of thousands or even hundreds of thousands of Sanskrit verses.

Even today, students of Sanskrit and of the Vedas still learn by memorizing thousands of sutras, or code-like phrases, that contain a huge amount of knowledge packed within them.

The Absolute Truth, or Krishna, first revealed the Vedas into the heart of Brahma, the universal creator. That knowledge was passed down in a chain of gurus and disciples over time. The same teachings are being presented even at the time of this article’s composition.
Information is transmitted through various formats. Digital information is sent through file transfers. Printed media contains information on various surfaces like signs, books and so forth. The Vedas are transmitted through two primary media: sruti and smriti.

Sruti is the audio portion of the Vedas. When we say that the Absolute Truth imparted the Vedas into the heart of Brahma, it means Brahma was enabled to hear, memorize and sing the Vedas. Sruti is supposed to be recited according to specific accents, poetic meters and other rules.

The smriti portion are paraphrases of the sruti. They are known as historical narratives infused with spiritually meaningful commentaries. These reworded compositions clarify the meaning of the sruti. We benefit from smriti because it’s easier to understand than the original four Vedas.

The Division of the Vedas

Roughly 5,000 years ago, a great sage named Vyasa foresaw that the memory of human beings would deteriorate due to the onset of Kali-yuga. In order to preserve the Vedas, he divided them into four primary parts:

This history is related in the Bhagavata Purana:

“The great sage, who was fully equipped in knowledge, could see through his transcendental vision the deterioration of everything material due to the influence of the age. He could also see that the faithless people in general would be reduced in duration of life and would be impatient due to lack of goodness. Thus he contemplated for the welfare of men in all statuses and orders of life. He saw that the sacrifices mentioned in the Vedas were means by which the people’s occupations could be purified. And to simplify the process he divided the one Veda into four, in order to expand them among men.” (Bhagavata Purana, 1.4.17-9) Vyasa then taught each of the four vedas to four of his chief disciples.

The Rig Veda was given to a sage named Paila. The Rig Veda deals with philosophy, self-inquiry, and processes of worship.

The Sama Veda was given to the sage Jaimini. The Same Veda contains songs of prayer and other chants, and deals with music and melodies.

The Yajur Veda was given to the sage Vaisampayana. Like the Rig Veda, the Yajur Veda contains rituals and processes for worship, as well as sacred hymns and mantras.

The Atharva Veda was given to the sage Angira. The Atharva Veda primarily deals with remedies for dangerous situations, rituals for sacred ceremonies such as marriage, and so on.

However, in the present day, the four Vedas are no longer intact. What remains of the four Vedas is but a small fraction of their total size. Therefore, in addition to compiling the four Vedas, Vyasa compiled the fifth Veda known as the Puranas:

“The four divisions of the original sources of knowledge [the Vedas] were made separately. But the historical facts and authentic stories mentioned in the Purāṇas are called the fifth Veda.” (Bhagavata Purana, 1.4.20)

Unlike the four Vedas, the Puranas are composed in such a way as to be accessible to the average human being. Whereas the hymns of the Rig Veda are written Vedic Sanskrit, containing many abstract statements, the Puranas contain ancient histories of the avatars, or incarnations of the Supreme Person, as well as narrations of the lives of great saints and kings.

Moreover, many of the Puranas are available in their full form, especially including the Bhagavata Purana, which is accepted as the most complete presentation of the Absolute Truth found among all Vedic texts. In fact, the name Purana means “that which completes,” for it is through a thorough study of the Puranas and Itihasas (ancient histories, such as the Mahabharata and Ramayana) that one can come to a perfect understanding of the Vedic wisdom.

The Goal of the Vedas

According to the Vedas, the goal of all knowledge is self-realization, culminating in direct experience of the Supreme Person, who is the Source of the self. This is confirmed by Sri Krishna in the Bhagavad Gita:

I am seated in everyone’s heart, and from Me come remembrance, knowledge and forgetfulness. By all the Vedas, I am to be known. Indeed, I am the compiler of Vedanta, and I am the knower of the Vedas.

The Vedas, along with our own relevant experiences and logic, help us receive unique insights into the Absolute Truth, the spiritual and material energies, the soul, karma and other interesting subjects. Although we can’t study it all, there’s something in the Vedas for everyone.

The Vedas divide the aims of human life into four broad categories:

However, beyond these four aims of human life is the fifth and final goal of prema, pure love of the Supreme Person, Krishna.