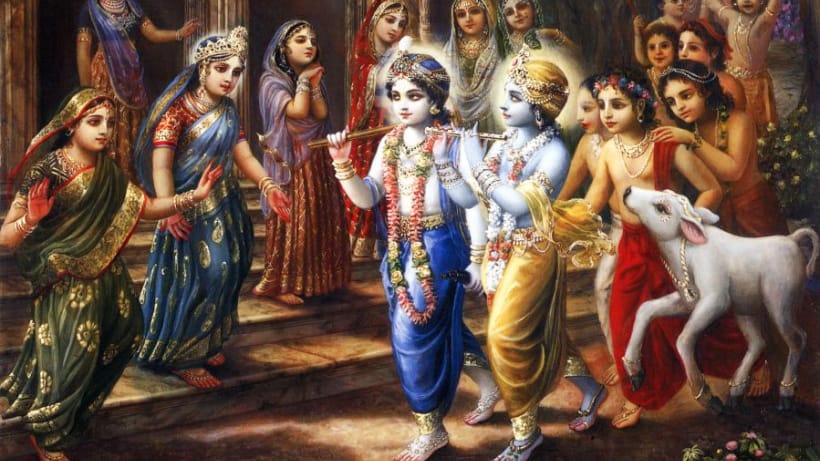 Balarama Purnima is an annual holiday celebrating the day when Lord Balarama appeared on this earth over 5,000 years ago. It takes place every year on the full moon day of the month of Sridhara.

The Significance of Balarama Purnima

In the Vedas, Lord Balarama is known as the Second Personality of Godhead. He is the first avatar, or manifestation from the Original Supreme Lord, Sri Krishna. All subsequent incarnations — including Lord Ramachandra, Lord Vishnu, Lord Nrsimhadeva, and even Lord Shiva — expand through Lord Balarama. Balarama and Krishna are equal in every respect, except that Balarama always accepts the mood and role of a servant toward Krishna, just as an elder brother looks after and serves his younger brother.

As the first incarnation, Balarama also serves as the adi-guru, or the original spiritual master. He knows how to serve and please Krishna better than anyone else. Maybe you can think of a pair of brothers you know who are very, very close to each other? They are practically always seen together? Their each others’ best friends? Krishna and Balarama embody this to the highest degree. The very principle of brotherhood is fully embodied in Their divine relationship. For this reason, devotees of Krishna worship and pray to Balarama to be able to become better servants of Krishna. Balarama provides all the spiritual strength necessary to overcome obstacles and increase our spiritual practices.

Can God really come to Earth?

Some people may doubt whether an avatar of the Lord like Balarama can really descend to this planet Earth. However, there are many religious histories that describe God manifesting Himself on Earth in some way or another. Let’s look at a few prominent examples:

Buddhism: According to the Vedas, the Buddha himself was an avatar of the Supreme.

Judaism: God famously appeared to Moses in the form of a burning bush. Later, He again entered the form of a bronze serpent and healed the Hebrews of their deadly snakebites. God even appeared to Jacob as a wrestler and grappled with him for an entire night!

Christianity: As a tradition rooted in Judaism, Christians accept all of the previously mentioned accounts of God’s appearance to the early day Jews. In addition, they believe God appeared in the form of His son, Jesus Christ. If God’s son can appear on Earth, then why not God Himself?

Islam: Although most Muslims agree that the Prophet Muhammad never actually saw God with his eyes, they all agree that God will personally appear before all true Muslims at the end of the millenium, as plainly visible as “the sun and the moon.”

Considering these numerous accounts, it’s not so surprising that God could descend to Earth. After all, He is all-powerful. What could He not do?

The Reason for Balarama’s Appearance

The Bhagavata Purana describes that Lord Balarama appears as the seventh son of Devaki and Vasudeva. However, before He leaves His mother’s womb, Krishna’s spiritual energy, Yoga-Maya, transfers Him to the womb of Rohini, the sister of Devaki living in Vrindavan. This sets the scene for Krishna’s subsequent birth in the prison of Kamsa and Vasudeva’s escape with Him to the home of Nanda and Yashoda.

LEARN MORE: Read the full account of Krishna’s appearance in this world as narrated in the Srimad Bhagavatam.

As a direct expansion of the Supreme Being, Balarama doesn’t take birth like an ordinary human. He is never under the influence or control of the material energy like us conditioned souls. However, He appears in His eternal spiritual form for the sake of assisting Krishna in His pleasure pastimes. Why would God want to appear in this material world at all? Krishna Himself answers this question in the Bhagavad-gita:
yadā yadā hi dharmasya glānir bhavati bhārata
abhyutthānam adharmasya tadātmānaṁ sṛjāmy aham
paritrāṇāya sādhūnāṁ vināśāya ca duṣkṛtām
dharma-saṁsthāpanārthāya sambhavāmi yuge yuge

“Whenever and wherever there is a decline in religious practice, O descendant of Bharata, and a predominant rise of irreligion – at that time I descend Myself. To deliver the pious and to annihilate the miscreants, as well as to reestablish the principles of religion, I Myself appear, millennium after millennium.”

In addition to this, there is a secret reason for Krishna’s appearance. He desires to attract the living beings of this world to take up the path of bhakti, or loving devotional service, which enables them to partake in eternal spiritual pleasure as Krishna’s servants, friends, or lovers. This is the true reason for Krishna’s appearance. If He simply wanted to kill demonic persons, He could do so in the blink of an eye, without having to personally appear Himself. However, in order to showcase His own beauty and His alluring pastimes with His beloved devotees, Krishna appears in this world, mesmerizing everyone who hears about Him. Balarama accompanies Krishna on His descent to this world along with all Krishna’s other prominent associates, such as His mother and father, His cowherd friends, and His feminine counterpart, the Supreme Goddess, Sri Radha.

How to Observe Balarama Purnima

Balarama Purnima is an ideal day for appreciating all the teachers and mentors in your life, for they ultimately represent the mercy of Lord Balarama, the original guide for the lost souls in this world. This is especially true for all gurus in an authorized parampara, or disciplic succession. It’s also an excellent opportunity to increase your daily practice of meditating or reading scripture.
In the Bhagavad-gita, Krishna tells Arjuna that the best sacrifice is japa, or chanting His names. That’s why Krishna devotees always chant the Hare Krishna maha-mantra:

Whether you chant on your own in quiet meditation, or in a group accompanied by musical instruments, performing this kind of worship, known in Sanskrit is kirtana, is the best way to celebrate Balarama Purnima. You can also prepare a special meal of vegetarian foods and offer it to a picture of Krishna or your spiritual teacher. In fact, this is a powerful spiritual practice that you can do every day for every meal that you cook and eat.

LEARN MORE: Check out our article on the practice of food yoga and how you can incorporate sanctified food into your practice of bhakti at home.