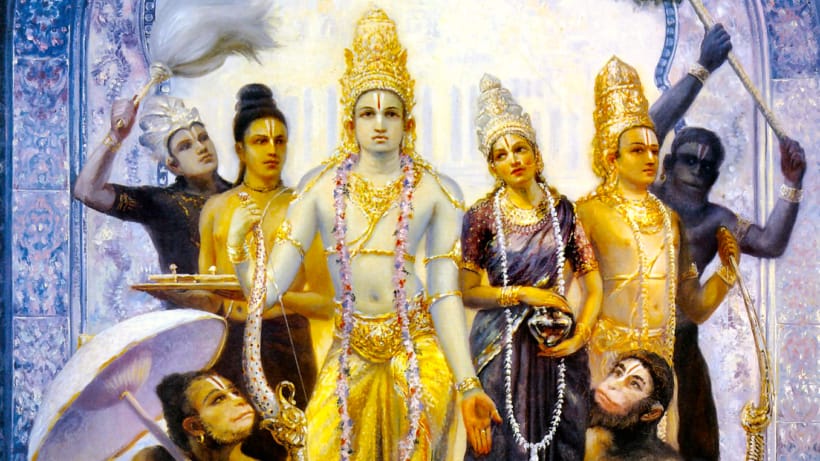 Dussehra is a Hindu holiday that occurs every year on the tenth day of the month of the waxing moon in the month of Padmanabha. Also known as Vijaya Dashami, it marks the victory of Lord Rama over Ravana in the great battle that took place in Ravana’s kingdom of Lanka.
This year, Dussehra falls on October 15, 2021.

The Life of Rama

What follows is a brief synopsis of the history of Lord Ramachandra known as the Ramayana.

LEARN MORE: Read a complete retelling of the Ramayana by Krishna Dharma for free online.

Lord Rama is one of the ten most famous incarnations of Krishna, known collectively as the Dashavataras. Although Rama is a manifestation of God, He appeared in a human family like an ordinary boy.

Growing up in the palace, Rama learned the art of warfare and mastered numerous weapons, such as the bow and sword. In his youth, he was invited on an expedition by the great sage Visvamitra to kill an evil demon rakshasa who was terrorizing the yogis of a nearby forest. On this trip, Rama learned sacred mantras from Visvamitra which enhanced his martial abilities even more.

Later, on the eve of Rama’s coronation ceremony, his wicked stepmother conspired to have him exiled from the kingdom. She tricked the king into sending Rama away for 14 years and installing her son, Bharat, on the throne in his stead. However, as a humble and obedient son, Rama willingly agreed to give up the throne. He had no attachment to the wealth and power that accompany kingship. He simply wished to live a virtuous life and serve his father. This was the purpose of Lord Krishna’s incarnation as Prince Rama — to show all human beings how to lead a righteous life.

Rama’s wife, Sita, as well as his brother, Lakshman, both desired to accompany Rama to the forest. Even though Rama protested that it would be a difficult and austere life, their attachment to Rama was too great to go without seeing him for so many years. Finally Rama relented, and the three of them departed for the distant forest of Dandakaranya.

For a number of years, Rama, Sita, and Lakshman all lived together in perfect harmony with nature. Lakshman happily served his elder brother and sister-in-law, and Rama and Sita enjoyed their time alone, unencumbered by the duties of political life.

One day, a rakshasi woman named Surpanakha came to the forest grove where Rama, Sita, and Lakshman were staying. Upon seeing Rama she immediately fell in love with him. She begged him to accept her as his wife. When Rama refused, saying he was already married and had vowed to only have one wife, Surpanakha became enraged and lunged at Sita, intent on killing her. To defend Sita and punish the wicked woman, Rama cut off her nose. Crying out in pain, Surpanakha ran away.

When Surpanakha returned to her home, she told her brother, Ravana, what had happened. In the midst of describing the events, Surpanakha began elaborately telling Ravana about Sita’s beauty. When he heard about Sita’s attractive features, Ravana immediately became attracted. He devised a plan to abduct Sita. Disguising himself as a holy man, Ravana visited the hermitage of Rama and Sita when Rama and Lakshman were away. He kidnapped Sita and brought her with him to his kingdom, Lanka.

When Rama returned to his forest cottage and saw that Sita was gone, he was devastated. He enlisted the help of Hanuman, Sugriva, and other vanaras, members of a half-human, half-ape race, to track down Sita and wage a war on Ravana’s kingdom.

Once Rama located Sita in Lanka, he immediately traveled there with an army and laid siege to Ravana’s palace. After a terrible battle, Rama emerged victorious. Although Ravana had defeated even the demigods in heaven, he was no match for Rama, who was an incarnation of God himself.

Dussehra marks the day of Rama’s victory over Ravana and the conquest of Lanka. It is also the day that Rama was reunited with Sita after nearly a year of separation.

On this day, Hindus erect a large effigy of Ravana made of wood, straw, or other combustible materials, and light it on fire. There are often cultural dances and dramas depicting the epic history of the Ramayana, the life story of Lord Rama, with special emphasis on the battle between Rama and Ravana.

Rama’s story is more than just another classic depiction of the triumph of good over evil. It shows that those who oppose the Lord are always destined to perish. And in setting the ideal example of a human being, Lord Ramachandra shows all of us how all we can better live up to our roles as sons, friends, husbands, and leaders.