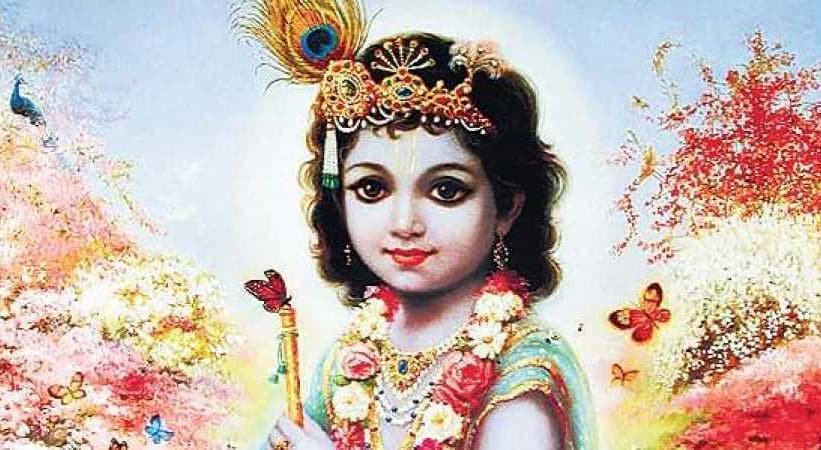 Janmashtami occurs every year on the eight day of the waning moon in the lunar month of Hrishikesha (August-September). This festival is the most important holy day for devotees of Krishna, because it marks the anniversary of Krishna’s descent to Earth in the town of Mathura, India more than 5,000 years ago.

The Significance of Janmashtami

In Sanskrit, janma means “birth” or “appearance” and ashtami means “eight,” referring to the eight day of the lunar cycle, which is when Krishna appeared. Devotees of Krishna all over the world celebrate Janmashtami by fasting, performing dramas, worshipping the Lord, and preparing a grand feast for Krishna’s pleasure.

Fasting is an ancient spiritual discipline that is very good for physical, mental, and spiritual health. On Janmashtami, devotees fast until midnight, which is the hour when Krishna made His appearance in the jail cell of Kamsa. Throughout the day, devotees cook dozens of delicious rice, wheat, dairy, fruit, and vegetable preparations, as well as many sweets — all of which they offer to Krishna to eat. Then after midnight they eat Krishna’s remnants, which are known as prasadam, or sanctified food.

Many devotee communities also stage dramatic reenactments of portions of Krishna’s life based on narrations found in the Bhagavata Purana and other Vedic texts.

Can God really come to Earth?

Many religious histories contain accounts of God manifesting Himself on Earth in some way or another. Let’s look at a few prominent examples:

Buddhism: According to the Vedas, the Buddha himself was an avatar of the Supreme.
Judaism: God famously appeared to Moses in the form of a burning bush. Later, He again entered the form of a bronze serpent and healed the Hebrews of their deadly snakebites. God even appeared to Jacob as a wrestler and grappled with him for an entire night!
Christianity: As a tradition rooted in Judaism, Christians accept all of the previously mentioned accounts of God’s appearance to the early day Jews. In addition, they believe God appeared in the form of His son, Jesus Christ. If God’s son can appear on Earth, then why not God Himself?
Islam: Although most Muslims agree that the Prophet Muhammad never actually saw God with his eyes, they all agree that God will personally appear before all true Muslims at the end of the millenium, as plainly visible as “the sun and the moon.”

Considering these numerous accounts, it’s not so surprising that God could descend to Earth. After all, He is all-powerful. What could He not do?

LEARN MORE: Read the full account of Krishna’s appearance in this world as narrated in the Srimad Bhagavatam.

The Reason for Balarama’s Appearance

Technically, as the Supreme Being, Krishna never actually takes birth like an ordinary human. However, for the sake of His own pleasure pastimes and to deliver the Earth from her suffering at the hands of demonic rulers, Krishna personally descends to this mortal world.

Krishna Himself explains to Arjuna in the Bhagavad-gita that He appears on Earth to uplift his devotees and to punish the wicked.

Whenever and wherever there is a decline in religious practice, O descendant of Bharata, and a predominant rise of irreligion – at that time I descend Myself.
To deliver the pious and to annihilate the miscreants, as well as to reestablish the principles of religion, I Myself appear, millennium after millennium.

In addition to this, there is a secret reason for Krishna’s appearance. He desires to attract the living beings of this world to take up the path of bhakti, or loving devotional service, which enables them to partake in eternal spiritual pleasure as Krishna’s servants, friends, or lovers.

This is the true reason for Krishna’s appearance. If He simply wanted to kill demonic persons, He could do so in the blink of an eye, without having to personally appear Himself. However, in order to showcase His own beauty and His alluring pastimes with His beloved devotees, Krishna appears in this world, mesmerizing everyone who hears about Him.

How to Observe Janmashtami

Janmashtami is a day for increasing your spiritual practice and taking full advantage of the blessing Krishna wishes to distribute on this holy day. In the Bhagavad-gita, Krishna tells Arjuna that the best sacrifice is japa, or chanting His names. That’s why Krishna devotees always chant the Hare Krishna maha-mantra:

Whether you chant on your own in quiet meditation, or in a group accompanied by musical instruments, performing this kind of worship, known in Sanskrit is kirtana, is the best way to celebrate Janmashtami.

You can also prepare a special meal of vegetarian foods and offer it to a picture or Deity of Krishna in your home. In fact, this is a powerful spiritual practice that you can do every day for every meal that you cook and eat.

LEARN MORE: Check out our article on the practice of food yoga and how you can incorporate sanctified food into your practice of bhakti at home.

The ideal way to observe Janmashtami is in the company of others who also wish to celebrate Krishna’s appearance and His teachings. You can look up Hare Krishna temples in your area and see if they are hosting a Janmashtami celebration that is open to the public. Such gatherings are a great opportunity to learn more about the path of bhakti and to make friends with like-minded spiritual practitioners.