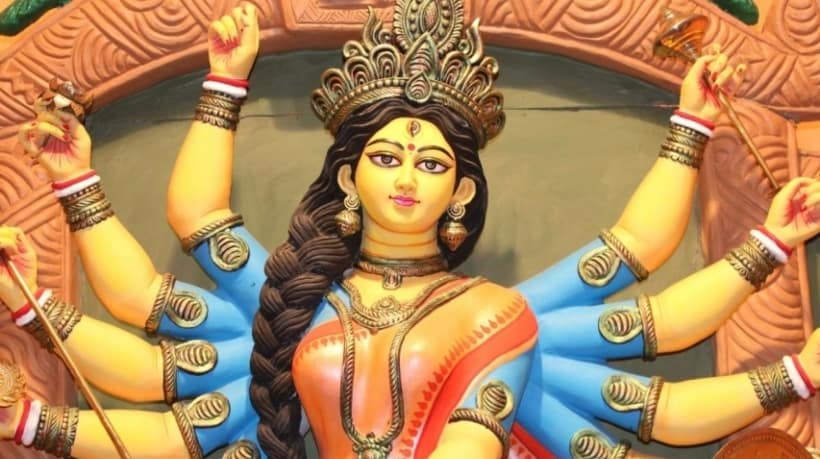 Navaratri is a festival spanning nine nights that celebrates the Goddess Durga, who is the presiding deity of the material energy that makes up our phenomenal world. In this article, we explain Durga’s position in relation to Lord Krishna and His other primary potencies, as well as how Navaratri is observed by Hindus today.
This year, Navaratri spans from October 6 – October 15, 2021.

“Lord Krishna naturally has three energetic transformations, and these are known as the spiritual potency, the living entity potency and the illusory potency.” (Caitanya-caritamrta 2.20.111)

The spiritual energy (cit shakti). This energy is embodied in Sri Radha, the original femine counterpart whole to the Absolute Truth, Sri Krishna. The cit shakti makes up all the spiritual worlds and their inhabitants, including Lord Krishan’s eternal associates.

The material energy (maya shakti). This energy is embodied in Durga-devi, the material expansion of Radha who presides over the material world. Durga is also known as the illusory potency who provides the material minds and bodies to the spirit souls in this world, causing them to identify with matter and forget their original, spiritual nature.

The living beings (tatastha shakti). Tatastha literally means “situated on the border.” The living beings, known in Sanskrit as jivas, are able to take shelter either of the spiritual energy or the material energy. When they accept a subordinate role of servitorship to God, then they are placed in the spiritual energy and experience full happiness. However, when they attempt to enjoy separate from the Lord, they receive temporary bodies and must undergo the suffering of birth and death in the cycle of samsara.

Durga-devi is the bride of Shiva, and together they rule over this material universe as the Supreme God and Goddess. They are expansions of Radha and Krishna in the spiritual world. When the living being transcends the modes of material nature and realizes his original spiritual identity, then he goes beyond the jurisdiction of Shiva and Durga and enters the abode of Radha and Krishna, known as Goloka Vrindavan.

Learn more: Check out our article on Durga-devi to learn more about the Goddess of this material world.

Navaratri honors the various names and forms of Durga-devi. As the mother of the universe, she assumes different personas to help inspire and uplift the living beings in order to help them along the spiritual path.

Below are the nine nights of Navaratri and the different forms of Durga worshiped on each day:

Day One: Shailaputri (Parvati). Goddess Durga sometimes appears as Parvati, daughter of the mountain named Himavan. In this form she weds Lord Shiva, and together they bear two children, Ganesh and Kartikkeya.

Day Two: Brahmacarini. Sometimes Durga takes the form of an unmarried female mendicant. Also known as Yogini, in this form Durga-devi practices asceticism and mysticism to set an example for persons attracted to those paths. However, especially in the present age of Kali, these paths of austerity are no longer practical, nor are they recommended. Instead everyone is encouraged to practice bhakti-yoga to achieve complete spiritual perfection.

Day Three: Chandraghanta. As the bride of Shiva, whose symbol is the half moon, Durga decorates her forehead with the symbol of her husband, showing her devotion and dedication to him.

Day Four: Kushmanda. On the fourth day, Durga-devi is worshiped as the mother of the universe, from whose womb all creations manifest. The Brahma samhita describes how Vishnu expands as Shiva to impregnate Durga with the innumerable living beings, and from her expands all the creative variety we experience.

Day Five: Skandamata. As the wife of Shiva, Durga gives birth to her son Kartikkeya, also known as Skanda, the god of war and commander in chief of the army of the demigods.

Day Six: Katyayani. The Goddess Durga appears in this form specifically to kill the evil demon Mahishasura. Later she fought another demon, Raktabija, who had been blessed with the benediction that if a single drop of his blood fell to the earth, then it would birth another version of himself. To prevent this, Katyayani cut off his head and drank his blood.

Day Seven: Kalaratri. This is one of Durga’s most fearsome forms. Instead of her usual golden-complexioned form, Kalaratri is black with bloodshot eyes. She is the embodiment of death and destruction, particularly the savage violence and bloodlust associated with war. In some places, she is described as the wife of Yamaraja, god of Death.

Day Nine: Siddhidatri. As the presiding Goddess of this material universe, Durga is able to bestow total material perfection to those who worship her with faith, dedication, and humility, following the path laid out in the Vedic scriptures (nonviolence, celibacy, etc.). However, she is more pleased when her devotees take up devotion to Krishna and aspire for spiritual perfection in bhakti yoga.