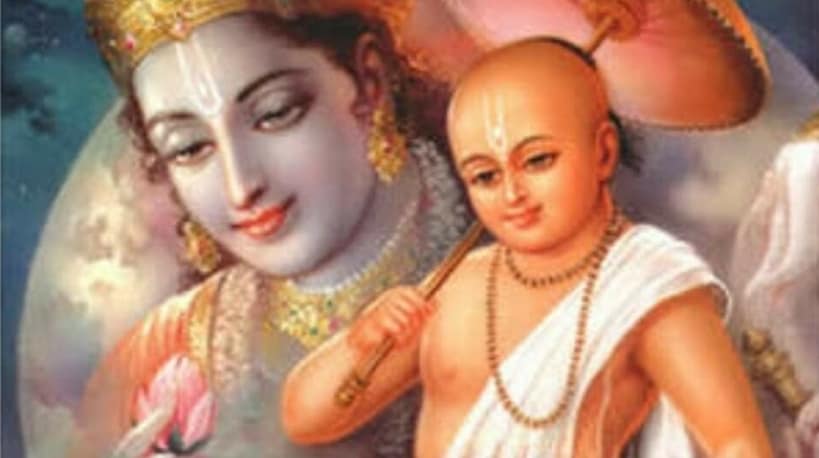 Also known as the Dwarf Incarnation, Vamanadeva is the fifth of the Dashavatar, or the ten prominent appearances of the Supreme Lord in every yuga cycle. Lord Vamana appeared in Treta Yuga to win back the heavenly realm for the demigods after they lost their kingdom to the demons.

Once, King Bali, the grandson of Prahlada, performed many Vedic sacrifices in order to become a powerful warrior. Upon completing the yajnas, Bali took his army to conquer Indra’s heavenly kingdom, Svarga. Bali had been blessed by Vedic priests and was virtually invincible. Seeing that defeat was inevitable, King Indra, the leader of the demigods, fled his kingdom along with his wife and associates.

Indra’s mother, Aditi, was greatly saddened by the situation. She wanted Vishnu to come and defeat Bali and reinstate her son on the throne of heaven. Aditi approached her husband, Kasyapa, and asked him to bless her so that she could have a very powerful son. In fact, she wanted none other than the Supreme Person, Vishnu, as her son.

After some time, Vishnu appeared from the womb of Aditi as the Dwarf Incarnation, Lord Vamana. Vamana immediately manifested his eternal form and proceeded to the sacrificial arena in Svarga. There he met King Bali. Bali stood up and warmly received Vamana, offering to give Him charity. Smiling, Vamana said, “My dear king, please let us have only three paces of land.”

When Bali agreed to this proposal, Vamana assumed a gigantic form and covered the entire universe in just two steps. Thereafter, being a devotee of Vishnu, Bali invited Vamanadeva to place His third step on Bali’s own head. Thus Vishnu conquered and won back the heavenly realm of Svargaloka for the demigods.

Once there was a wicked-hearted asura named Vrika. He was very greedy to obtain a blessing from some demigod to become powerful and influential in the world. So he approached the sage Narada and asked him the following:

“O Narada! Which demigod is most quickly pleased? Brahma or Shiva?”

Narada replied, “If you want to achieve your desired result quickly, then worship Shiva. He is so magnanimous that he even fulfilled the desire of the ten-headed Ravana.”

Hearing this, Vrika immediately traveled the the sacred place of Kedaranatha and sat down to light a sacrificial fire. Taking a hatchet, the demon began to cut pieces of his own flesh from his body to throw as offerings into the sacrificial fire. After several days, Vrika’s body was bloody and diminished, but the demon’s resolve did not waver. Becoming impatient, he finally held the hatchet up to his neck, preparing to cut it off as the final offering.

Just then, Shiva appeared and stopped him, shouting, “My friend! Stop! What are you doing?! You may ask from me whatever you like. I will fulfil your wish. There is no need to torment your body in this way any further. Actually I am more pleased by simple, humble offerings of water.”

By the glance of Lord Shiva, Vrika’s body was restored to its former strength. The demon stood up and laughed, saying, “My wish is this: may death come to whoever I touch upon the head with my hand.”

Shiva was disturbed to hear this strange and perverted request, but as promised, he granted the demon’s desire. “Om!” Shiva said, holding out his hand. “It is done. Your wish has been granted.”

Without warning, Vrika leapt at Shiva with his hand outstretched, trying to touch Shiva on the head. He wanted to test the strength of his new power and ensure that it would work. Shiva was shocked and frightened to find that this demon planned to make him the first victim!

Shiva fled and Vrika pursued him all over the Earth and to the outer limits of the universe. Seeing that His devotee was in peril, Lord Vishnu assumed the form of Vamana and arrived on the scene, obstructing the path of Vrikasura.
“My dear Vrika,” Lord Vamana said. “Why are you rushing all over the universe? You look tired. Please stay here and rest awhile.”

Vrika felt at ease hearing the kind words of the Lord. He explained what had happened and why he was chasing Shiva.

Vamanadeva laughed. “Oh! Is that so?” He said. “Well, I cannot believe Shiva would grant such a benediction. I think he tricked you. He is after all the lord of goblins and ghouls. If you truly wish to know whether Shiva has granted this power to you or not, then without delay simply touch your hand to your own head, and you will see for yourself.”

Vrika was so convinced by the Lord’s words and upset at the notion that Shiva may have lied to him, that he immediately touched his own head. In that instant, his head exploded as if struck by lightning and the demon fell down dead.

In this way, Lord Vamana saved Shiva by tricking the demon Vrikasura.

Anyone who fears danger on the Earth can pray to Lord Vamanadeva for protection. This is said in the Srimad Bhagavatam: sthaleshu mayavatu-vamano vyat. “May Lord Vamanadeva protect me on the land.”

Elsewhere in the Bhagavatam it is said:

“A person who has broader intelligence, whether he be full of all material desire, without any material desire, or desiring liberation, must by all means worship the supreme whole, the Personality of Godhead.”

Thus anyone and everyone can approach the Supreme Lord in any of His avatara forms and pray for shelter, peace, and spiritual realization.