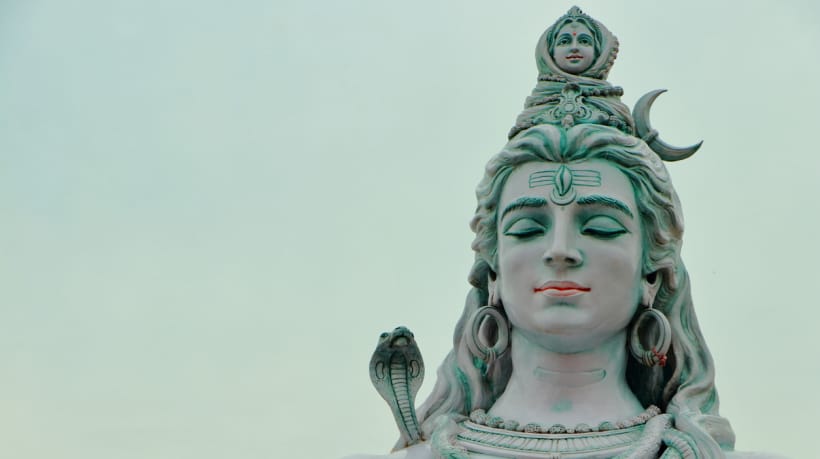 Shiva is one of the most powerful demigods in the universe. As the husband of Durga, he shares in her lordship over the total material energy, known as māyā. However, both he and Durga are servants of Krishna. Together they rule over this material universe, which is like a prison for souls who oppose the authority of the Supreme Lord.

Descriptions of Lord Shiva in the Vedas

Throughout the Vedas, Shiva is referred to by names such as Mahadeva (the Great God), Vishveshvara (Lord of the Worlds), and Sarveshvara (Lord of All). Many people in India and around the world even worship Shiva as the Supreme Being in a mode of monistic ahaṅgropāsana, or worship of oneself.

However, it is vital to understand these attributes of Shiva in the total context of the Vedas. It’s true that Shiva is the supreme lord of this material realm, but his jurisdiction does not extend to the realm of Lord Vishnu in Vaikuntha, or that of Krishna, the Original Personality of Godhead, in Goloka Vrindavana, the summit of the spiritual reality.

Therefore, when the Vedas state that Shiva is devānām hṛdāyaḥ, or the heart of the demigods, this is simply affirming his role as overseer of Krishna’s external, material energy, māyā.

As master and servant, Vishnu and Shiva are very intimately connected. Just as a king may sometimes allow a confidential minister to attend meetings on his behalf, Shiva is sometimes seen as a non-different representative of Vishnu. For instance, in the Harivamsha Parva of the Mahabharata it is said:

If Vishnu and Shiva were absolutely identical, then there would be no reason in addressing them by different names, and the Vedas would be wrong to attribute different roles and functions to each of them. Therefore, it is essential to understand such statements in the total context of the Vedic literatures.

The ultimate teaching of the Vedas is that Shiva is an expansion of Krishna, and he identifies as a devotee of Krishna. Shiva is most pleased when human beings worship him with this understanding.

Like Vishna, Shiva has many different forms that he assumes for the purpose of his service. In the lowest limit of the realm of Vaikuntha, Shiva appears as Sadashiva, where he is eternally manifest as a lord of a Vaikuntha planet. Shaivites who worship Shiva as the Supreme Being but who also accept Vishnu as non-different and fully spiritual may attain this realm.

Outside of Vaikuntha is the pure light of the brahmajyoti. This light emanates from a form of Shiva known as Mahakala, or Supreme Time. There he resides in a form so effulgent that it is impossible to see where his body ends and his environment begins. He is worshiped by impersonalists, also known as jnana-yogis or advaitins, as the all-pervading, absolute beingness, or brahman. But it should be noted that at no time does Shiva relinquish his personal nature, for this is not possible.

Within the material universe, Shiva takes the form of Shankara, the husband of Parvati (Durga), who oversees all the activities of the conditioned living beings in this world. As Shankara, Shiva is the presiding deity of the false ego. No one is more intimately involved in the living being’s beginningless bondage of ignorance than Lord Shiva, and so many sections of the Vedas recommend worshiping him in order to obtain spiritual emancipation. However, Shiva always recommends his most intimate servants to go directly to Krishna, or Vasudeva.

The Song of Lord Shiva

In the Bhagavata Purana, there is a series of beautiful prayers Shiva offers to Lord Krishna. In one verse, he says:

“Lord Śiva addressed the Supreme Personality of Godhead with the following prayer: O Supreme Personality of Godhead, all glories unto You. You are the most exalted of all self-realized souls. Since You are always auspicious for the self-realized, I wish that You be auspicious for me. You are worshipable by virtue of the all-perfect instructions You give. You are the Supersoul; therefore I offer my obeisances unto You as the supreme living being.” (Srimad-Bhagavatam, 4.24.33)

Shiva goes on to appreciate the beauty of Krishna’s supreme form, and he concludes by glorifying Krishna’s devotees, the Vaishnavas:

“My dear Lord, Your lotus feet are the cause of all auspicious things and the destroyer of all the contamination of sin. I therefore beg Your Lordship to bless me by the association of Your devotees, who are completely purified by worshiping Your lotus feet and who are so merciful upon the conditioned souls. I think that Your real benediction will be to allow me to associate with such devotees.” (Srimad-Bhagavatam, 4.24.58)

These verses show how Shiva identifies with the devotees of the Lord and simply wants to be counted among them. He actually does not enjoy receiving worship directly. Rather, he prefers to see Sri Krishna served and glorified in all respects.