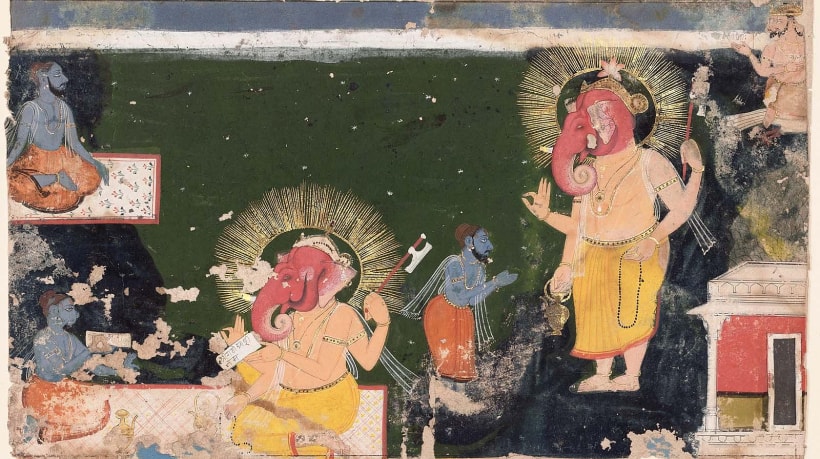 Also known by the names Veda-vyasa and Krishna Dvaipayana, Vyasadeva is best known as the compiler of the Vedas. He is the literary incarnation of God who appeared on Earth specifically to preserve the Vedic knowledge for the present Kali-yuga.

The Birth of Vyasadeva

Vyasadeva was the son of another manifestation of Krishna known as Parashurama. Once, Parashurama was traveling and he came to a river. Needing to cross, he asked a young fisherwoman who had her boat docked nearby to ferry him to the other side.

As the woman rowed, Parashurama became attracted by her beauty. He exercised his mystic powers to cause a fog to overcome the river and grant them privacy. Parashurama moved to sit closer to her.

“Tell me, beautiful maiden,” he said, “what is your name? From where do you come?”

“I live with my father on the bank of this river Yamuna,” she replied. “The people in the village call me Matsya-gandha because I spend all day on the river and I smell like fish.”

Parashurama laughed. “Such a name is hardly suitable for someone as fetching as you.”

“Please, O sage,” Matsya-gandha replied, biting her lip, “I also find you attractive, but I am a chaste woman. I cannot lay with you.”

“Do not worry,” Parashurama replied, reaching out to touch her arm. “Our union is ordained by Providence. You will bear a son who will be an incarnation of the Lord, and he will preserve the Vedic wisdom for future generations. By my mystic power I will preserve your chastity for your future husband.”

Convinced by this promise, Matsya-gandha agreed, and she rowed the boat to a nearby island. Together they conceived a son who was given the name “Dvaipayana,” or one who was born on an island.

Afterward, Parashurama blessed her that body would always smell fragrant like the best perfume, and he gave her the corresponding nickname Gandhavati. Some years later, Gandhavati would marry the great king Shantanu, and their marriage would produce a son known as Bhisma, who would play a central role in the history of India known as the Mahabharata.

As the son of Parashurama and an empowered incarnation of the Lord in his own right, Vyasadeva was an accomplished mystic. He could easily slip into a deep state of trance and look forward in the current of time to witness how future events would unfold on Earth.

One day, he foresaw that human society would be ill-equipped to face the coming age of Kali, known as the Age of Quarrel and Hypocrisy, where even religious and political leaders lose sight of virtue and succumb to selfish pursuits. He decided to compile the one Veda in written form and to divide it into four parts — the Rg, Yajur, Sama, and Atharva — as well as the fifth Veda, known as the Puranas and Itihasas (histories).

Vyasa selected five of his chief students to take responsibility for each of the five parts of the Vedic wisdom. The Rg Veda was given to Sage Paila, the Yajur to Sage Vaisampayana, the Sama to Sage Jaimini, the Atharva to Sage Angira, and the Puranas were given to Sage Romaharshana.

Afterward, Vyasa still felt disconcerted about the future of humankind, and so he inquired form his guru, Sage Narada, about the cause of his dissatisfaction. As a result of this conversation, Vyasa finally composed the most important of all Vedic literatures, the Srimad Bhagavatam.

Another well-known episode in the life of Vyasadeva is the composition of the Mahabharata, the great history of the Kuru dynasty and the battle of Kurukshetra, which culminated in the teachings of Krishna to Arjuna known as the Bhagavad-gita.