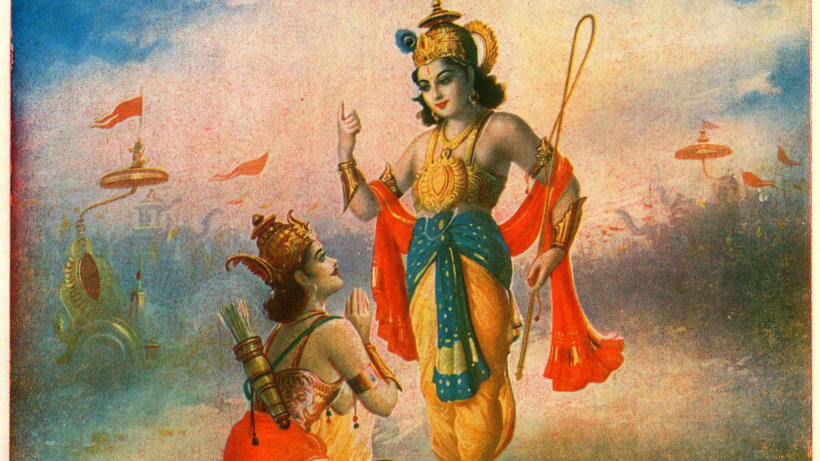 The Bhagavad gita is an ancient text that provides insight and guidance for living a successful human life. It was written over 5,000 years ago by the sage Vyasadeva as a part of the larger history known as the Mahabharata.

Background of the Bhagavad-gita

The Bhagavad gita is a recorded dialogue between King Dhrtarastra and his secretary, Sanjaya. Within this exchange, Sanjaya narrates to the king a conversation that occurred between Arjuna, a great warrior, and Krishna, who is the Supreme Personality of Godhead.

King Dhrtarastra was very anxious to hear from Sanjaya about a battle that had just taken place between his sons, the Kurus, and his nephews, the Pandavas. Both sides had competed in a bloody war in order to assert their right to the throne.

The Pandavas had made many attempts to avoid the war, but each time Duryodhana refused their entreaties. Throughout his entire life, Duryodhana had envied his cousins, and he had even tried to kill them in various ways. But because they were always protected by Lord Krishna, Duryodhana was unsuccessful.

Dhrtarastra hoped that somehow his sons would win the battle and put an end to the Pandavas, so he inquired from Sanjaya:

O Sañjaya, after my sons and the sons of Pāṇḍu assembled in the place of pilgrimage at Kurukṣetra, desiring to fight, what did they do?

This is how the Bhagavad gita begins.

Mahabharata is one of the largest epic histories in the world, running a total of approximately 100,000 verses of Sanskrit poetry. It’s chief storyline follows the lives of the five Pandava brothers — Yudhisthira, Bhima, Arjuna, Nakula, and Sahadeva — and their efforts to regain rulership over the world from their wicked cousin, Duryodhana. However, the Mahabharata includes countless offshoot narratives, which are masterfully intertwined together, and which contain essential teachings on ethics, politics, and spirituality.

What Does the Bhagavad-gita Teach?

The Bhagavad-gita is sometimes referred to as the Gītopaniṣad, since like an Upanishad it teaches principles of metaphysics and philosophy that are indispensable for anyone who is serious about spirituality or religious life. The topics of the Gita can be divided into five main branches:

In Sanskrit, karma is the word for ‘action.’ It is used to refer to the everyday things we do in our life. However, it also is used to imply the results of those activities. As the Bible teaches, “you reap what you sow.” In other words, we cannot escape the consequences of our actions.

The goal of yoga is to transcend karma by acting for a higher purpose. When we offer the results of our work to Krishna, we are exempt from any harmful results. Of course, this only applies to wholesome actions which are beneficial for ourselves and humanity. We can’t just do whatever we want in the name of serving God.

LEARN MORE: Karma is an intricate science. To learn more about its workings and its impact on us, check out our article.

According to the Vedas, time is eternal. Unlike the prominent Western concept of linear time, the Vedas explain that time is cyclical. There is a popular saying in America that “you only live once.” However, the Vedas are clear that both consciousness and matter are eternal. This is supported by Newton’s law of the conservation of energy. In reality, nothing is ever created or destroyed — the energy is simply rearranged. As Krishna tells Arjuna in the Bhagavad-gita, the soul is eternal:

“Never was there a time when I did not exist, nor you, nor all these kings; nor in the future shall any of us cease to be.” (Bhagavad-gita 2.12)

In contrast to the linear view of time, the laws of karma and reincarnation show how time and nature are in fact cyclical. Each year we rotate through four seasons. The moon waxes and wanes in its repeating revolution of the earth. Similarly, the soul experiences birth, youth, adulthood, old age, and finally death, only to relive this cycle in a new body, exposed to a new variety of experiences.

LEARN MORE: The Vedas teach that time is eternal. Check out our article on the nature and function of time.

What is Prakrti (Matter)?

Matter is the temporary, inert manifestation of the Supreme Being’s all-pervasive energy. In this material world, everything is constantly being created and destroyed. By contrast, spiritual energy never decays or changes form. Matter is temporary; spirit is eternal.

However, due to the law of conservation of energy, material energy in itself is never actually destroyed. So in this sense, even matter is eternal. However, our bodies, homes, and even our relationships in this world will eventually be annihilated by the force of time. For this reason, matter is considered temporary.

LEARN MORE: This material world is like a dream. It is temporary and ultimately not our real life. Check out our article on the material energy.

What is the Jiva (Soul)?

The first teaching of the Bhagavad-gita is the distinction between the soul and the material body. Krishna tells Arjuna:

“As the embodied soul continuously passes, in this body, from boyhood to youth to old age, the soul similarly passes into another body at death. A sober person is not bewildered by such a change.” (Bhagavad-gita 2.13)

The soul is the actual person, not the body. YOU are a soul, a minute spark of consciousness animating a material body. Just as a human drives an automobile, the soul moves the body according to its desires. A body is like an outfit, something that the soul wears for a fixed period of time before discarding it and putting on a new one.

By practicing yoga, anyone can experience the soul directly and realize their own nature as spiritual beings.

What is the Absolute Truth (God)?

The Absolute Truth is the ultimate source of all energies. The personal feature of God is the original, ultimate aspect of the Absolute. By understanding this, we also understand all spiritual and material energies, just as when we see the moon, we also see its light.

The soul is one of the energies of the Absolute Truth, Krishna, and our ultimate purpose is to serve Him. It is the natural longing of everyone to express love for someone and to share in a loving relationship. However, in this world of matter our relationships are temporary and fraught with conflict. Krishna is the person whom we are meant to love. Our relationship with Him is eternal.

“A person in full consciousness of Me, knowing Me to be the ultimate beneficiary of all sacrifices and austerities, the Supreme Lord of all planets and demigods, and the benefactor and well-wisher of all living entities, attains peace from the pangs of material miseries.”