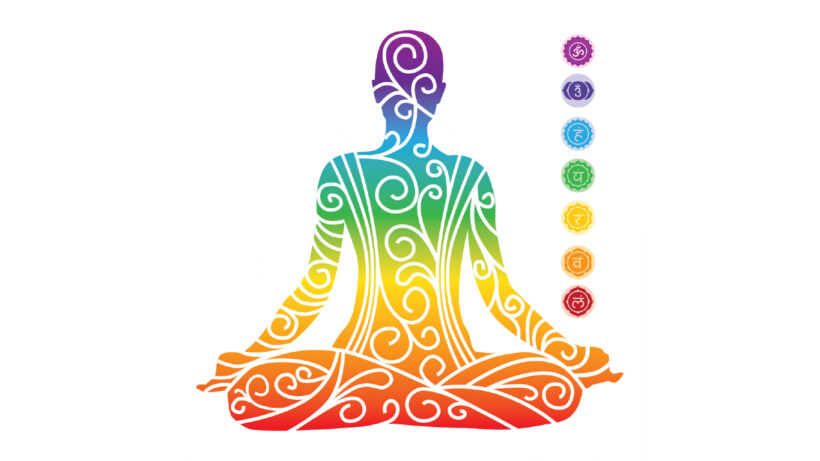 The ancient science of Ayurveda describes the human body as both physical and energetic. Every human being has seven chakras which act as interfaces that relay information between the body of flesh and bone and the subtle, energy body that operates our sensory and emotional response systems. In this article, we give a detailed overview of the seventh chakra.

What are the Chakras?

Thinking of the human being’s nervous system as a powerful radio station provides a helpful analogy for visualizing how it works.

First, imagine the spine as a radio tower. Sensory information is transmitted to the spinal column via the five senses, which act as satellite receivers. Then, this information is sent up the vertebrae to the central control room, the brain, where it is displayed on the screen of the mind.

The chakras are energetic filters that direct the in-out flow of feeling and perception, based on your personal genetic program. When your chakras operate at peak performance, you feel amazing. However, when they are overworked, obstructed, or repressed, you experience various physical and mental ailments.

By adopting healthy habits and cutting out harmful lifestyle choices, you can bring your chakras into balance and experience a huge boost in happiness and well-being.

The Seventh Chakra at a Glance

Each of the seven chakras has defining features that make it unique. Below is the profile of the crown chakra, known in Sanskrit as सहस्रार (sahasrara), meaning “thousand-petaled.”

Physical location: The top of the head. By bringing your awareness to the upper part of the brain, known as the cerebral cortex, you can feel the energy of your seventh chakra.

Developmental stage: Eighteen to twenty-five years. This is the end of adolescence and the beginning of adulthood. The beliefs and attitudes we adopt during this period are likely to stay with us for the rest of our lives.

Chief domains: Faith, intellect, and spiritual perception. The crown chakra shapes how we view reality on a fundamental level. It regulates our ability to distinguish between spirit and matter.

Emotional challenge: Attachment. Our perception and experience is largely determined by both our desires and our expectations. Attachment is the primary enemy of spiritual growth.

Element: Intelligence. In Indian philosophy, intelligence is treated as an element, a subtle substance that colors the mind whenever we make decisions. Our intelligence determines the quality of our choices in life, as well as our ability to perceive spiritual reality.

A person with a healthy crown chakra is rare in this world. Their entire chakra system is active and balanced. They are physically, mentally, and spiritually strong. They are charismatic leaders, teachers, and spiritualists. They recognize the temporary nature of this world, and they work to bring others up to their level of spiritual understanding.

When your seventh chakra is balanced, your intellect is sharp, and your mind and senses are fully under your control. Due to spiritual perception, you know that you are a transcendental entity distinct from your physical body. Rather than being pushed and pulled by the various urges of the mind and body, you are self-disciplined, self-satisfied, and self-realized.

A fully-developed crown chakra makes you enlightened. You are connected with the Divine Source. It leads to pridelessness, empathy, and a service spirit.

In her book Eastern Body, Western Mind, Dr. Anodea Judith explains that each chakra has a right and an identity.

The crown chakra deals with the right to know our self and the world around us.

It governs our universal identity and our need for self-knowledge.

Chakras display two distinct types of imbalance: they’re either too open or too closed. This causes the chakra to be either over-stimulated or suppressed. In some cases, a person’s energetic body may oscillate between the two types of imbalance.

A person with an over-developed seventh chakra attempts a spiritual bypass. In other words, they neglect the issues of their lower chakras in favor of excess “spiritual” and intellectual stimulation. They are out of touch with their physical body and immediate surroundings. They are insensitive both to themselves and others. They may engage in rigorous spiritual practices without understanding the deeper purpose behind them.

When your seventh chakra is hyperactive, your approach to spirituality is ego-driven. You rely too heavily on your own powers of logic and reasoning. You are obsessed with the realm of ideas and have little appreciation for the natural world.

An inflated crown chakra can ultimately lead to a psychotic break. You come to believe that you alone possess an enlightened vision of the world. Rather than desiring to serve others, you think that you are their superior and their savior.

Persons with a deficient seventh chakra lack self-awareness. They may repeatedly make the same mistakes, unable to recognize their errors and adjust accordingly. They are attached to their way of doing things and resistant to change. It is impossible for them to imagine what it would be like to think or behave differently than they do now.

A deficient seventh chakra blocks your perception of spirit. It leads to dogmatic thinking. You may be a devout atheist or a fanatic religionist. In either case, your intellect is unable to access the subtleties of faith and spiritual experience.

When your crown chakra is under-developed, you are arrogant, narrow-minded, and shallow. Deprived of spiritual connection, your personality lacks depth.

The chakra system reveals that all illnesses are at least in part psychosomatic. In other words, the condition of your mental well-being and subtle life will always impact your physical health. These are some of the health issues that can arise in a person whose crown chakra is out of balance:

How to Activate & Repair Your Crown Chakra

If you recognize in yourself some of the symptoms of an imbalanced seventh chakra, there are many things you can do to help restore it to balance. Here are some steps you can take to heal your crown chakra:

Below, we list affirmations which help to strengthen and nourish the seventh chakra. In addition, chanting and meditating on the Sanskrit syllable, OM (pronounced like “home” with a nasal intonation on the “m”) will balance this chakra. You can also try out chakra meditation.

Affirmations to Restore the Sacral Chakra

Learn More About Your Other Chakras