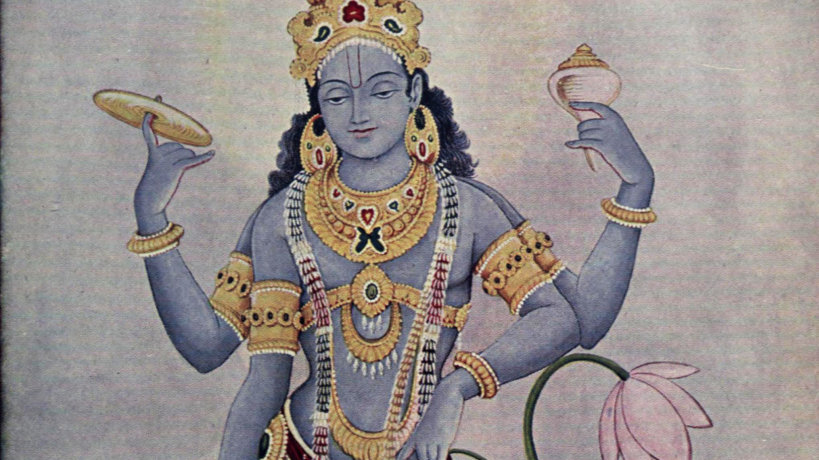 The Vedas contain numerous processes for spiritual elevation, and among them the vow of Ekadashi is one of the most effective. Below we recount a conversation between Lord Krishna and King Yudhisthira regarding the amazing qualities of Parshva Ekadashi, also known as Padma or Jayanti Ekadashi.

This year Pavitra Ekadashi is observed on September 16, 2021.

Parshva Ekadashi is very special because it is on this day that Maha-Vishnu, whose dreaming creates the unlimited material universes, turns over in His sleep, from His left side to His right side. Every year, Lord Vishnu sleeps from Deva-sayini Ekadashi until Utthana Ekadashi, while resting atop His expansion, Ananta-sesha, floating on the Causal Ocean.

Maha-Vishnu is an expansion of Krishna who presides over the total material energy, known in Sanskrit as the mahat-tattva. However, He never directly interacts with the material energy, being always absorbed in His own spiritual bliss. As Maha-Vishnu, the Lord performs His eternal pastime of taking rest, or yoga-nidra. In this form, God enjoys the pleasure of sleeping and dreaming.

The Punishment and Reward of King Bali

Another reason Parshva Ekadashi is special is that this day commemorates the installation of a deity form of Lord Vamana in the kingdom of Bali. Although Bali was born in a family of asuras, or ungodly people, he was actually a great devotee of Lord Vishnu. He would worship the Lord every day, and he greatly admired his grandfather, Prahlada Maharaja, who was also a renowned devotee of God.

By receiving the blessings of his priests and his elders, Bali was empowered to conquer Indra’s kingdom in the heavenly realm known as Svarga. As a result, Indra and all of the other demigods approached Vishnu begging Him to intervene on their behalf. Vishnu agreed, and He appeared in His form as Vamana, a small brahmin boy. When Vamana came to Bali’s new kingdom in the realm of Svarga, Bali greeted Him with a grand reception and told Vamanadeva to ask for a benediction. Bali was a great soul, so he knew the value of serving guests, especially holy persons like qualified brahmanas.

Lord Vamana had devised a plan to trick Bali. He requested simply three steps worth of land.

“O King,” Lord Vamana said, “although you are very munificent and are able to give Me as much land as I want, I do not want anything from you that is unnecessary. If a learned brahmin takes charity from others only according to his needs, he does not become entangled in sinful activities.”

Bali was astonished at the boy’s meager request. “I am the owner and controller of the entire universe!” Bali replied. “And yet you request merely three paces of land? You are not very intelligent. Why don’t you request an ample quantity of wealth, land, and other valuables so that you may adequately ensure your future prosperity?”

Vamanadeva smiled and said, “My dear king, if I were not satisfied with three paces of land, then surely I would not be satisfied with all the land in this universe. Although powerful kings like Prithu and Gaya attained rulership over all the continents in the world, they still were unable to fully satisfy their ambition.

“One should be satisfied with whatever he achieves by his previous destiny, for discontent can never bring happiness. A person who is not self-controlled will not be happy even with possessing the three worlds.”

After hearing the wisdom of the brahmin boy, King Bali was convinced that this was no ordinary mendicant. Smiling, he told Vamana, “Alright, you may take whatever you like.”

Just then, Vamana assumed a gigantic form whose height seemed to stretch to the ends of the universe. In one step, this giant form of Vamana covered all of planet earth as well as the subterranean regions such as Rasatala. Then in His second step, he covered the entire upper planetary systems, from Brahmaloka to Svarga and the realms of the Pitrs, or forefathers.
This form of the Lord was so gargantuan that His body enveloped the very universe. There was no place left for His third step! Seeing this, Bali humbly bowed down before the Lord, recognizing the brahin boy to be none oher than Vishnu Himself.

“My Lord,” King Bali said, “since I have promised you three paces of land, I cannot allow my word to become false. Therefore I request you to please place your third footstep upon my head. In this way I will fulfill my promise to grant you three steps.”

Lord Vamana was so deeply moved by the devotion and humility shown by his devotee Bali that He granted Bali the following blessing:

“O great hero,” Lord Vamana said, resuming His natural size, “I shall now accompany you back to your kingdom in Sutala, one of the subterranean heavens. Though this realm of Svarga must be returned to my devotee Indra, I will always remain with you in Sutala and give you protection in all respects, along with your family, friends, and associates. Although I am unknown to the empirical philosophers and scientists, and very difficult to perceive for the yogis and jnanis, I will always remain visible to you there in Sutala, and you will be able to worship me to your heart’s content.”

In this way, King Bali received a very special benediction from the Lord in His eternal form as Vamanadeva.

No amount of wealth will result in true happiness. Although Lord Vamana spoke clever words to trick Bali into granting His request, the philosophy Vamanadeva taught is nonetheless true. No matter how much property, money, fame, etc. we accumulate, it’s never enough. Therefore we should be grateful and satisfied with whatever material prosperity we are allotted in this lifetime and focus our mind and life energy on obtaining spiritual wealth, also known as krishna-bhakti.