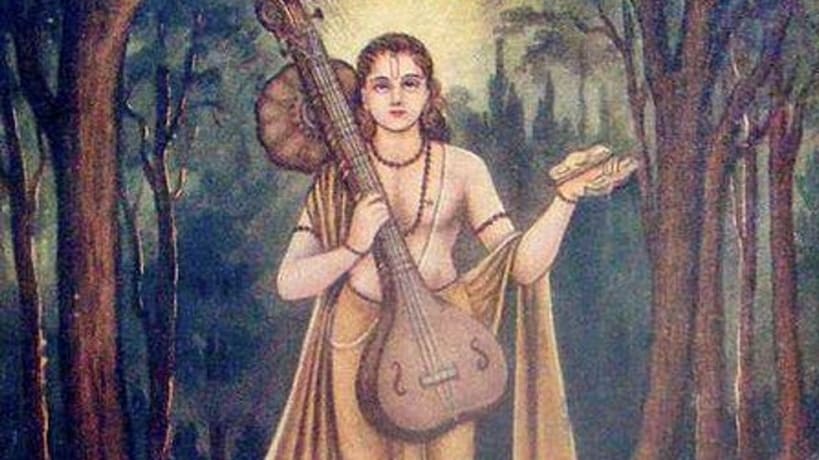 Ekadashi is the Sanskrit name for the eleventh day of the waxing and waning lunar cycle. Ekadashi is a special day for fasting and increasing your practices of meditation and bhakti yoga. The Vedas recommend observing this sacred day in order to experience both physical and spiritual benefits.
The Vedas contain numerous processes for spiritual elevation, and among them the vow of Ekadashi is one of the most effective. Below we recount a conversation between Lord Krishna and King Yudhisthira regarding the amazing power of Indira Ekadashi.
This year Indira Ekadashi is observed on October 2, 2021.

The Arrival of Sage Narada

King Indrasena was the ruler of the kingdom known as Mahishmati Puri. He was wealthy, well-respected, and the father and grandfather of many sons and grandsons. As a daily duty, he set aside several hours for japa meditation on the names of the Supreme Lord, Sri Krishna. In this way, he was exemplary in both his material and spiritual leadership.

One day, the Sage Narada arrived in the assembly hall of King Indrasena. The king and his subjects immediately fell to the ground to offer their obeisances to the sage. After washing the sage’s feet and offering him an elevated seat, and praising him with kind words, King Indrasena sat in silence, waiting for the sage to speak.

“O King,” Narada said, “how fare the seven limbs of your kingdom? How is your personal well-being? How are your ministers? Is your treasury plentiful? Is your army strong? Are your alliances in good health? Are the brahmins in your kingdom protected and engaged in the performance of sacrifice? Are your subjects engaged in their prescribed duties and content in their material and spiritual lives?”

King Indrasena replied, “Yes my lord, by the grace of Sri Krishna and His devotees, we are all well. And your presence today in my kingdom is surely a sign of continuing prosperity for us.”

“It is true,” Narada said, “for I bring news which will result in even greater well-being for you and the entire kingdom.”

“Oh?” King Indrasena asked, eager to hear from the sage. “Please tell me what news you have brought.”

Narada said: “Before coming here I was visiting Yamaloka where I met with the great worshiper of Vishnu, Yamaraja, Regent of Death. While speaking with Yamaraja, I noticed that your father was present in his assembly. Yamaraja explained to me that although he was a righteous ruler, he had accidently neglected one Ekadashi fast and failed to maintain his Ekadashi vow up until the proper time. As a result of this transgression, he had fallen to the abode of Yamaloka after death. When he saw me, he begged me to communicate to you his current status and also request you to observe the upcoming Indira Ekadashi fast on his behalf. If you do this, your father will be relieved of his sin and will be able to ascend directly to the spiritual world.”

“Of course!” King Indrasena replied, “I would do anything for my departed father. Please just tell me how to properly observe the Ekadashi fast.”

The Process of Following Ekadashi

“Now please listen,” Narada said, “as I tell you the method for following the vow of Ekadashi on the holy day of Indira Ekadashi. If you observe Ekadashi in this way, your father will surely be promoted to Vaikunthaloka. This process can be followed on every Ekadashi day to gain maximum material and spiritual benefit from the fast.”

Narada then enumerated the following steps for following Ekadashi:

God’s justice is infallible. We should note that the Lord’s justice is infallible. Every wrong we commit in this lifetime will be accounted for, and no act of negligence will go unpunished. Many people like to imagine God as only soft and loving, but they do not know how this vision of the Divine can accommodate the rampant violence and exploitation seen in the real world. In truth, God is both just and merciful. He holds us accountable to our actions, but is also willing to forgive our wrongdoings as soon as we humbly repent and make reparations for our errors.

Bhakti benefits our family and loved ones. Bhakti-yoga is not just about our own selfish spiritual growth; we can also benefit others by taking our spiritual life more seriously. A devotee’s family members automatically gain spiritual elevation just by virtue of being related to someone who is seriously practicing bhakti.