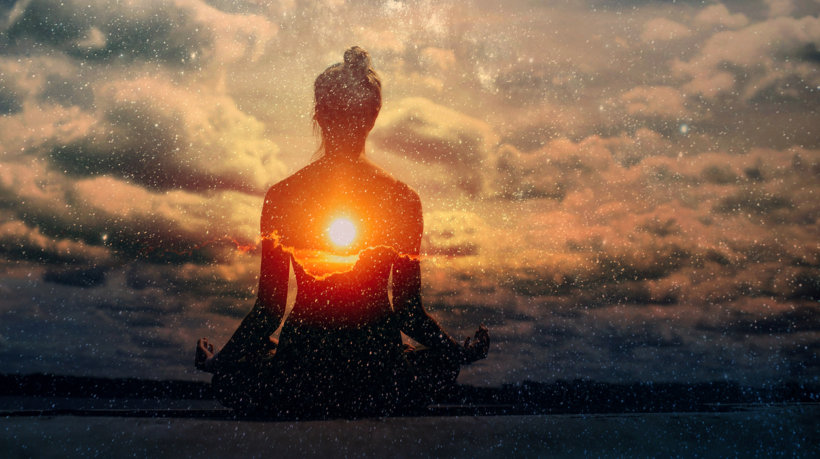 Who are you? Beneath the layers of hair, skin tissue, blood, fat, and bone… what is there? Generations of philosophers and scientists have attempted to explain the phenomenon of consciousness. Notable among them was French sophist Renee Descartes, “I think, therefore I am.” But is that all you are? A stream of disorganized, often bizarre and emotionally surcharged thoughts?

The Bhagavad-gita describes the self as the soul, a spark of pure consciousness. In this article, we explore what the soul is and how it interacts with the material world.

The Self: Eternal Consciousness

The Vedic approach is startling to the Western mind, so familiar with theories, hypotheses, and a universe of uncertainty. In elaborate detail, the Bhagavad-gita describes the eternal nature of consciousness, and how a conscious individual comes to inhabit a machine-like body for a span of eighty to a hundred years. Just as the sun illuminates the sky, the soul fills the body with consciousness. Although it is virtually invisible, being approximately one ten-thousandth the tip of a hair in size, the soul animates bodies of all species of life, from a microbe to a wooly mammoth! By spiritual energy the dormant seed generates enough force to push through the topsoil and sprout. This same energy keeps the heart beating throughout the duration of one’s life. As the Vedas reveal: aham brahmasmi, I am spirit.

The process by which the spirit soul remains encased in a physical body is called karma. Karma is without beginning. Life after life the soul wanders in one body after another, experiencing the diversity of millions of species. Each action generates a series of consequences, like one domino initiating a long row of tumbling pieces. We are bound by karma, as a prisoner is bound by his sentence. Every action we perform in ignorance of our spiritual identity prolongs our imprisonment. In this way the helpless soul rides up and down the ferris wheel of samsara, or the cycle of birth and death, sometimes in a position of fortune and prosperity, sometimes in a position of hardship and distress.

It is not that the Supreme Agent, God, wishes unhappiness upon us. Rather, as it is said, every man is the architect of his own fortune. Nature is governed by stringent laws. When a child touches fire, even if he does not know any better, still he is burned. In the same way, the human being suffers due to ignorance of the subtle laws which govern this world. Without recognizing the ultimate ownership of Krishna, everyone tries to use natural resources to his own advantage. Rather than respecting the inherent spiritual value of every living being, we abuse and even ruthlessly slaughter others for our own personal profit. Is it a wonder the world is fraught with war and conflict when over fifty billion animals are murdered each year? Violence breeds violence. Peace sows peace.

Reincarnation: The Cycle of Rebirth

At the time of death one’s conception of life carries him to his next body, just as the air carries an aroma. Factually Krishna is always kind to His living entities. Those humans who falsely take pleasure in exploiting others and exercising their power are transferred to predatorial species, like tigers, snakes, spiders, and other carnivorous creatures. Similarly, those who cannot bear the seeming burden of responsibility that accompanies a human birth and who take their own life are born as trees, plants or other non-moving species, where one’s freedom is significantly restricted.

In this way every living being is granted the life he both desires and deserves, in accordance with the providential arrangement of the Supersoul, who accompanies the soul as his witness and benefactor, providing him with such essential faculties as memory, intelligence, and intuition. The Supersoul, an expansion of Krishna, guides the wandering living being from within so that he may live out his innumerable desires, which are like so many fantasies. He also arranges the soul’s external environment in such a way that he can experience the vital lessons he needs to learn in order to eventually break free of the cycle of birth and death altogether. This is the true purpose of the law of karma.

After many, many lives, the fortunate soul may come to understand something of his spiritual nature. At that point, if he inquires from an authorized spiritual master, he may learn the science of yoga, by which one can free himself from the perpetual misery of material existence. The substance of yoga is yajna, or sacrifice. Yajna means to act for the pleasure of Krishna, the Supreme Person and the true proprietor and enjoyer of everything in existence. When we neglect God and attempt to find happiness independent from Him, we are bound by karma. Factually nothing is independent from the Supreme. To think that we can act without His sanction is false ego.

The thoughtful living being forsakes his own immediate satisfaction in order to pursue his highest, long-term interest. He sacrifices his time and energy for the sake of self-realization. By acting for the pleasure of Krishna he is gradually freed from all karmic reactions. Whether he walks to the temple, plays music for Krishna, grows a garden to offer fruits and vegetables to Krishna, cooks for Krishna, or sings Krishna’s names by chanting the Hare Krishna mantra, he is progressively situated in his original spiritual consciousness. This is Krishna-karma, or transcendental activity. In such activity there is only bliss. Unlike material sensual pleasure, there are no negative side-effects.

When one’s life is supersaturated with Krishna conscious activity, where every thought, word, and deed is for the pleasure of God, he is no longer forced to take another material birth upon quitting his body. Instead he is gifted a spiritual body and he resides in the spiritual realm of Vrindavana as an eternal associate of Krishna. There the soul experiences ever-increasing ecstasy while partaking in an unlimited variety of spiritual adventures. In Vrindavana even the dust is conscious. Every atom moves only for the pleasure of Krishna. Vrindavana is our home.