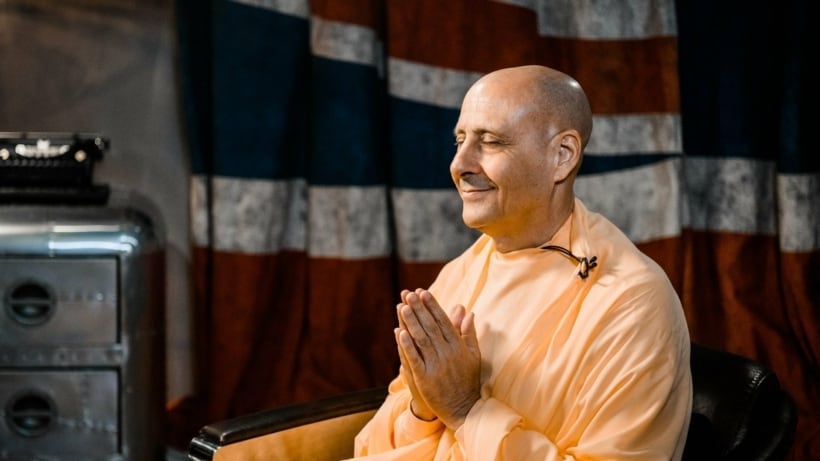 A guru is one who is heavy with knowledge. The English word “gravity” shares a common origin with the Sanskrit word “guru.” The genuine spiritual teacher has deeply understood the deception of material happiness. He is always grave, never wasting time in frivolity or other childish behavior.

The Bhagavad-gita describes the guru as a self-realized soul who imparts transcendental knowledge to his or her disciples. In this article, we explore the qualifications of a guru and how one can recognize one in the world.

Actually this world is a very dangerous place. One wrong act can lead to consequences that last for many lifetimes. Fully conscious of the risks of material activity, a true guru is sober. He is not intoxicated by the allurements of this fleeting physical world. An accomplished spiritual master knows sensual pleasure to be temporary and without substance, and he therefore always aims his attention inward. In this way he derives boundless spiritual happiness from his meditation on the Personified Absolute Truth, Krishna. Just as a tortoise holds his limbs within his shell, a person fixed in transcendental knowledge rigidly controls his mind and senses. Only when required for service to God does he activate his mind and senses. For this reason, a guru is called “goswami,” or the master of his senses. It is said that whole world is ruled by the five senses and the mind. Everyone races to accumulate bodily comforts and satisfy the urgent demands of their frantic mind. Advertisements, TV sitcoms, Hollywood blockbusters, and other forms of modern media all contribute to this chaotic scramble for success and happiness in the name of “free-market capitalism.” Only one who is able to rise above this free-for-all by reigning in his mind and senses is fit guide others. A real leader must be free from vice. Otherwise who is leading the people, the man or his addictions?

Virtues of a Guru

In the Bhagavad-gita, Krishna lists many qualities by which one can recognize a saintly person. He is not bewildered by the different bodies of living entities, but is attracted to the soul within. In this way he is a kind friend to all beings, even if some oppose him as though an enemy. He offers respect and love even to a blade of grass, a tree, or an insect, what to speak of an animal or a human being. By virtue of his realization of the all-pervading presence of the Supreme Person, a guru is beyond such mundane dualities as happiness and distress, success and failure, joy and lamentation. He sees everything as the mercy of God, using any circumstance to his advantage in the execution of his devotional service. The self-realized servant of God is always fixed in knowledge of Krishna as the sole proprietor and enjoyer of everything in existence, and so he is never attached to any material object. He accepts what comes and never endeavors to obtain anything beyond what he requires for his service. Because he understands that Krishna is the only true friend and well-wisher of all beings, the genuine guru is never falsely proud of his position. He rightly sees himself as a humble servant of all, and he credits the Lord for whatever feat he might accomplish, great or small.

Guru is a Messenger

The most important quality of a guru is his speech. A guru is bound by scripture. He cannot invent his own teaching, but must present the science of yoga as it was handed down to him in parampara, or disciplic succession. In this way the teachings remain pure. Unless a spiritual master is a member of an authorized line of gurus (sampradaya) leading back to Krishna or one of His bona fide representatives, he cannot make disciples. If a doctor does not receive training from a certified medical school how can he practice medicine? In reality there are no self-taught gurus. A saint cannot be rubber-stamped or elected through the democratic process. If any so-called guru does not represent Krishna and present himself as a humble message-carrier of the Supreme Person, he is a cheater and can be understood to have ulterior motives. Keeping in mind Krishna’s descriptions of a qualified spiritual master in the Bhagavad-gita, the aspiring transcendentalist should be very cautious to test the quality of his guru before taking formal initiation into spiritual life. Otherwise his whole practice may be ruined from the start.

But when one hears with faith from a genuine guru and serves him with gratitude and affection, it is as good as associating with Krishna Himself. As it is said, like father, like son. The servant of God is a perfect representative of God, and by taking shelter of such an enlightened soul one can very quickly revive his innate transcendental consciousness.