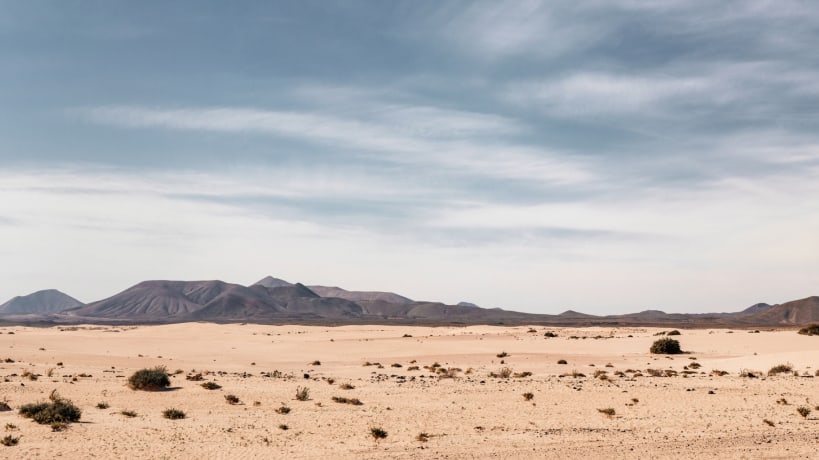 The Vedas contain histories of ordinary people who experienced miracles in their lives by observing Ekadashi. Below we tell what happened to King Mandhata, a descendant of the sun god who ruled Earth many ages ago, when he fasted on Sayana Ekadashi.

A Kingdom Plagued by Drought

King Mandhata was the embodiment of virtue. He was handsome, muscular, and charitable, and everyone in his kingdom adored him. Throughout the day, the citizens sang his praises as they performed their respective duties.

Thanks to King Mandhata’s expert governance, no one suffered from poverty, hunger, or homelessness, and even disease was practically unheard of. Such a high standard of life is only possible when both the people and their ruler lead pious, God-centered lives, for all forms of suffering are a result of sin and godlessness.

One summer day, as Mandhata peered out of his palace window, he saw nothing but yellow-brown fields and languishing trees. His kingdom had seen virtually no rain for the past three years. The rainy season should have begun weeks prior. In former times, during the rainy season, the countryside would hardly go a day without seeing the shelter of thundering rain clouds and drinking up their life-giving waters. But now the landscape was withered and dry. Even the laborers were visibly fatigued by the unrelenting heat. In the sky, the sun blazed with the indifference of a judge bringing down his wooden gavel. “How can this be?” Mandhata thought. “What have I done wrong?”

Mandhata turned away from the window and saw one of his ministers swiftly approaching down the corridor of the palace.

“My lord,” the minister panted, “a group of subjects have assembled outside the palace gates. They seek an audience. They are quite upset. I think it’s best if you come immediately.”

Entering the Grand Hall, Mandhata was astonished to see the sheer number of citizens who had assembled. Hundreds of men stood before him, along with their wives and children. It pained Mandhata to see his people like this. One of the men stepped forward to speak.

“O King!” the man said, “All your life, you have cared for us like a father for his children. We can never repay our debt to you. You are our protector, maintainer, teacher, and friend. We now stand before you in utter desperation. Our kingdom has run out of water.”

Then another man spoke up, “How do you expect us to live without water? This drought has gone on for three years! Our crops are drying up and our grain stores are nearly exhausted. Do you wish to see us all die?”

Finally an elderly woman spoke, “My dear king, you have always looked after us, just like your father before you. Please bring back the rains. Somehow you must find the cause of this drought and set things right. We are begging you.”

The king remained silent for several moments. Then he replied, “Who can live without water and grains? I have spent many sleepless nights contemplating this drought, but I have not yet found any cause for it. The Vedas explain that a kingdom shares in the piety and sin of its ruler. When a ruler is wicked, the entire country must suffer the reactions of his sins. I have combed through my past actions time and time again, but I could not discover anything that could have possibly brought this calamity upon us.”

Standing up, Mandhata grabbed his scepter and raised it high in the air. “If the Lord so desires,” he thundered, “I shall find a way to end this cursed drought.”

The crowd erupted into loud cheers and cries of relief.

Having left his kingdom with a small retinue of soldiers, King Mandhata searched the surrounding forest for someone who could tell him how to end the drought that plagued his people. He visited small temples and ashrams and paid his respects to the various Deity forms of the Lord and His empowered servants, the demigods. He begged for assistance from priests and wandering holy men, but no one was able to provide him a solution.

On the verge of losing hope, Mandhata arrived at the ashram of Sage Angira, one of the ten sons of Lord Brahma. Angira stood up to receive the king, and Mandhata immediately fell to the ground in prostrate obeisances.

“My king!” Angira said, “Please rise. You are my honored guest. Tell me, what brings you to my hermitage?”

Mandhata told Angira about the drought and subsequent famine that threatened his kingdom.

“Please help me,” Mandhata begged. “What sin did I commit that has now caused this calamity to fall upon us?”

Angira looked off toward the horizon, lost in deep contemplation. Meditating on the supreme cause of all, he sought out the specific incident which had now resulted in the imminent death of Mandhata’s subjects.

Finally, the sage spoke, “I can see that there is a low-class worker in your kingdom who is deceiving others by donning the dress of a holy mendicant. Out of laziness and jealousy he shuns his labor and instead spends his days imitating renunciates, performing false austerities to gain cheap admiration from the public. If you kill this man, then the drought will stop.”

Mandhata’s eyes widened in awe at the sage’s divine vision. How amazing! He could see the very root of this catastrophe, which had completely escaped my attention!

“But he has done no real harm to anyone,” Mandhata protested. “He is simply out of his natural element and in want of proper guidance. Surely he does not deserve to be put to death simply for executing the austerities of a sadhu. Please tell me some other way to bring rain back to my kingdom.”

The sage Angira smiled. “O king, you truly are a father to your people. You deserve the post of emperor of the world. If you wish to end this drought, you and your citizens should simply observe the upcoming Ekadashi fast which occurs on the eleventh day of the waxing moon. This day, known as Shayana Ekadashi, will eradicate all karmic reactions faced by you and your citizens, and the natural weather patterns will be restored. Bounty, wealth, happiness, and harmony will return to your kingdom.”

Overjoyed, Mandhata thanked the sage and raced back to his kingdom to make the necessary arrangements for the upcoming Ekadashi day. He sent out brahmins and ministers to every corner of the kingdom to inform the citizens and instruct them how to properly observe the fast.

The day after Ekadashi, soon after everyone in the kingdom had broken their fast, the sky grew overcast with dark, dense rain clouds.

From that day forward, King Mandhata and his subjects eagerly awaited every Ekadashi so they could fast and celebrate in honor of the Lord, and as a result of their spiritual sacrifice, the kingdom flourished like never before.

Shared responsibility. We often forget that we are interdependent on the members of our community. The Vedas teach that karma is not simply an individual affair. We are impacted by the choices of other members of our family and community. Similarly, our choices impact them. With this in mind, we must be very careful to make responsible choices in our lives.

The weight of leadership. Leaders are charged with the responsibility of guiding and protecting those who are under their care. When King Mandhata heard that his people were suffering, he did everything in his power to remedy the situation. Anyone in a position of leadership — parents, teachers, employers, supervisors, politicians, etc. — are obliged to sacrifice their own interests for the sake of those who depend on them.

This kind of selfless service is a powerful practice for spiritual growth.