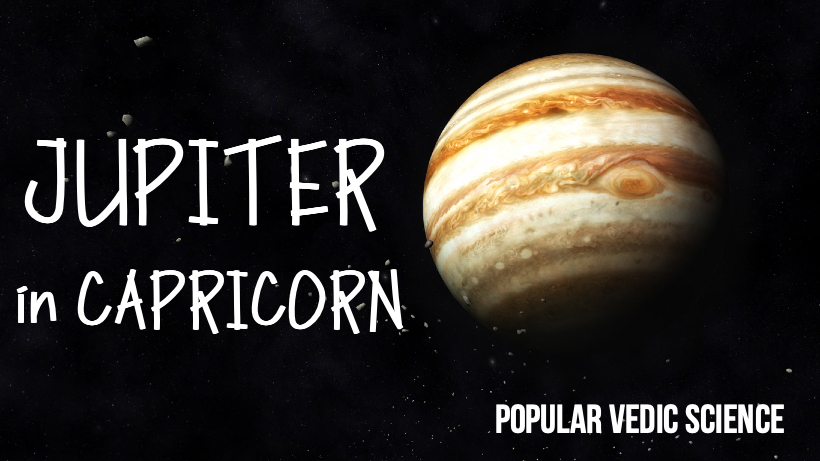 Capricorn is the tenth sign of the Zodiac. In Vedic astrology, Capricorn is known by the Sanskrit name makara, or “the sea monster.” The sign of Capricron possesses a clever, sensible, and dependable nature. Capricorn is a sign of discipline. In an astrological chart, it indicates areas where you are deliberate and philosophical in your efforts.

Capricorn influences its planetary lord in the following areas:

Traits of Jupiter in Capricorn

The influence of Jupiter in a birth chart will change depending on which house it is located in, its relative position in relation to other planets, as well as other factors. However, the following general traits are likely to be found in a native who has Jupiter in Capricorn:

You are a realist. Ruled by Saturn, Capricron’s psyche is rooted in the real world. For you, seeing is believing. While this is a strength at times, it can also lead you to be overly critical of others.

You care about the world. You are deeply invested in material equality for all human beings and are keenly aware of social structures and hierarchy. While you may endeavor to help others, you are likely to be disappointed in your efforts. This is due to the built-in inequities in this world, as well as the fact that true equality is found on the spiritual platform.

You’re a natural skeptic. You don’t easily change your convictions, even when presented with compelling logic and evidence. You want to see real-world results before you’re inclined to change your mind.

You may not excel in school. Some people have “street smarts,” while others have “book smarts.” You have more of the first category.

You are physically frail. Your body is not as strong as others, which can lead to physical illness, frustration, and a sense of jealousy toward others.

Jupiter in Capricorn in the 12 Houses

The first house indicates physique and self-expression. You will have a good education and a long life. You are very thoughtful when it comes to practical matters, though you can be a bit self-centered.

The second house indicates wealth and cultural traditions. You eat well and enjoy sharing food with others. You are fond of talking. You may struggle in the first part of life.

The third house indicates siblings, courage, and literary works. You have good relations with your siblings, though they may outshine you in terms of their professional success. You can be somewhat mean at times, and you may experience financial difficulties.

The fourth house indicates one’s mother, home, and basic beliefs. You live well and enjoy a fair amount of happiness in life. You enjoy a pleasant relationship with your mother and other relatives, and you are likely to find happiness in marriage and family life.

The fifth house indicates children, creative works, and overall success. You are successful in life and may rise to a high position. However, you may be disappointed with regards to children.

The sixth house indicates debt, disease, and service. You are very clever and have an aptitude for study and learning, particularly in regard to spiritual or scientific texts. However, you are lazy and may act unethically at times.

The seventh house indicates the spouse, marital happiness, and sexual desire. You are blessed with a good spouse and children. You are good-looking and generous with others. You are a skilled speaker and others enjoy your company.

The eighth house indicates death, calamities, and interest in the occult. You have a long life and enjoy visiting holy places and traveling for spiritual purposes. You are humble and you serve others. However you may not have much marital happiness.

The ninth house indicates religion and morality. You excel in religious and spiritual work. You can become famous as a religious or political leader. Though you are very intelligent, you may not be generous with others.

The tenth house indicates one’s father, career, and reputation. You will be very rich in life, and you have good relations with superiors such as your parents and the government. You are successful in your professional life.

The eleventh house indicates gains, aspirations, and friendships. You are wealthy and have a long life. You are fearless. However, you may not have many children.

The twelfth house indicates losses, misfortune, and liberation. You are unattached and soft-spoken. You may act unethically at times, and you are prone to hypocrisy. You often serve others.

Famous People with Jupiter in Capricorn