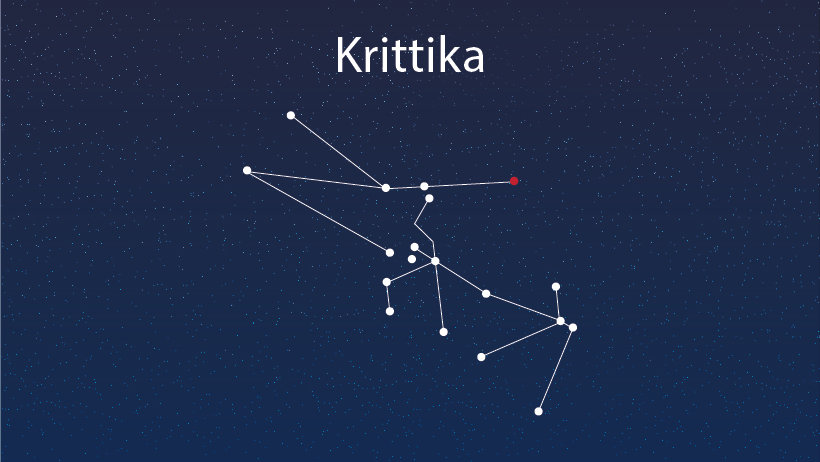 The nakshatras are small constellations of stars that the moon travels through as it orbits Earth. In English, nakshatras are known as “lunar mansions.” Krittika is the third of 27 nakshatras. If you were born when the moon was between 26:40 degrees Aries – 10:00 degrees Taurus, then this guide is for you. You’ll learn all about your strengths, weaknesses, compatibility, ideal careers, and more.

Every nakshatra has its own set of fixed attributes. This includes planetary ruler, nakshatra group, zodiac sign, deity, symbol, and power. The features of Krittika are below:

Sanskrit Name: कृत्तिका (Krittika) comes from the Sanskrit word कृत्त (to cut). One meaning of Krittika is “the cutter,” indicating perceptivity, power, and a discerning nature.

Planetary Ruler: Sun. In astrology the sun is considered the king of the planets. According to the Vedic understanding, the sun is an expansion of God. This planet is associated with the soul or self, leadership, happiness, success, self-realization, and spiritual enlightenment.

Nakshatra Group: Monstrous. Nakshatras are divided into three classes — monsters, humans, and gods. Krittika is a monstrous nakshatra. People in this group are generally intuitive, strong-willed, and assertive. They may be prone to anger and violence.

Deity: Agni. The lord of fire, Agni, is considered to be the mouth of the gods. In Vedic tradition, offerings to the gods are often made through sacred fire. Agni is also associated with transformation and purification.

Symbol: Knife or flame. This represents Krittika’s ability to burn, cut, or otherwise sever ties with negativity. It also represents some degree of ferocity and can be dangerous if misused.

Power: To burn or consume in order to purify. Just as fire burns away impurities, so does Krittika. Negative elements are burned away in order to reach a deeper truth. Krittika bestows a discerning nature and also gives light, warmth, and nourishment.

Resonant Syllables: In India, the birth nakshatra is traditionally used as one means of choosing the name of a child. The corresponding syllables for the four quarters (padas) of Krittika are A (अ), I (ई), U (उ), and E (ए). The syllable of a person’s first name is sometimes used when calculating an astrological chart if the time of birth is unknown.

Krittikas are very intelligent, and their intelligence manifests especially in their ability to see straight to the heart of the matter. Straightforward individuals who are unlikely to beat around the bush, they may be described as discerning and penetrating.

Krittikas are inclined to fight for a social or spiritual cause. You strive to better yourself and the world around you, sometimes in radical ways. As the lunar mansion associated with fire, Krittika often uses the metaphorical fires of purification to bring out the good qualities of human nature.

You are well-liked by others for your bright and sociable nature. You are very nurturing, often exhibiting parental qualities. In addition to having an attractive personality, you are also physically attractive.

Parental qualities and physical attractiveness will be especially prominent in Krittikas whose moons fall in Taurus, in the lunar mansion’s latter three quarters. These individuals often feel a strong desire to have children. Through the influence of Venus, the planetary ruler of Taurus, they are talented in the fine arts. They are elegant, beautiful, and may possess a keen sense of fashion.

Due to their confidence, determination, and passion, Krittikas excel in leadership positions. Careers that contribute towards a greater cause will be attractive to Krittikas, who do best when they feel that their work is meaningful. As sociable beings, they should avoid jobs that require a lot of solitary work.

The sun’s influence on Krittika natives creates great leaders capable of fighting for revolutionary causes. To accomplish the goals you set for yourself, you need the sun’s intense and forceful qualities. But these same qualities can make you somewhat volatile, prone to fiery outbursts and a confrontational attitude to those who don’t agree with you.

Controlling your temper and your stubbornness requires a lot of effort. When people disagree with you, your pride may cause you to overreact—you will be able to react more calmly if you remind yourself that it’s not a personal attack. The cause you are fighting for is probably worthy, but be mindful not to use that as an excuse to domineer others. Just as the sun is necessary for the ongoing well-being of the world, so are people like you—you can help guide society in the right direction as long as you don’t steamroller over them in the process.

You can get carried away with your ideas and your ambitions. Your restless nature makes it difficult for you to think things through properly before taking action. Intuition is one of your natural gifts, but acting impulsively will not do you any favors. Learn to curb your enthusiasm to prevent yourself from becoming overzealous and reckless—not every idea is worth fighting a war for!

Fulfillment of desires is the primary motivation for Krittika natives, and this trait can lead to great success. However, be careful that your desires don’t get out of hand—ambition and greed often go arm in arm. When you see something that you want it may be hard to control yourself, even if what you desire isn’t good for you or isn’t available. This tendency could lead you into multiple illicit affairs. It can also make you prone to indulge in unhealthy eating habits. If you learn to gain control over your own desires, you will achieve greater satisfaction and avoid a lot of trouble.

You’re self-motivated. Krittikas have strong wills and no lack of enthusiasm. You know what you want and are motivated to achieve it. You won’t need to be pushed and prodded by others to get things done, provided you think those things are worth doing.

You have a strong appetite. Good food is one of the great joys of your life. You like to eat, and your energetic lifestyle means that you need a decent amount of fuel. Your love for food could lead to skills in the culinary arts.

You’re good for your word. As the old saying goes, “my word is my bond.” This definitely applies to you. When you say you’ll do something, you’ll do it. People can trust you to be honest and accountable.

You respect holy people. In Vedic terminology, people who are holy or saintly are referred to as sadhus. Krittikas are known to value sadhus, persons who are pious and whose lives reflect religious and spiritual ideals. Religion has a somewhat tarnished reputation in contemporary society, but you know that there is always value in those who dedicate their lives to a higher principle.

You can be a harsh critic. Your discerning nature means that not much gets past you, and you aren’t afraid to point out the flaws you see. Try not to hold others—and the world around you—to standards that are too high. A little tact and tolerance can be invaluable.

Krittika sexuality is symbolized by a female sheep. In terms of physical compatibility, this makes them an ideal match for persons born under Pushya nakshatra.

Based on holistic matching, Krittikas are most likely to find happiness in long-term partnerships with:

First Quarter (26:40 degrees Aries – 0:00 degrees Taurus): Sagittarius. You have a strong moral compass and are philosophical in nature. Your family is important to you and you have close bonds with them, especially with your father.

Second Quarter (0:00-3:20 degrees Taurus): Capricorn. You like to care for others and have a maternal nature. You’re not as fast and furious as other Krittikas. Unlike many Krittika natives, you think things through carefully before taking action. Your slow pace shouldn’t be mistaken for laziness, however—you’re a hard worker and motivated to achieve material success. Nonetheless, be careful not to be overly consumed by materialistic concerns.

Third Quarter (3:20-6:40 degrees Taurus): Aquarius. Altruism is important to you. You are generous with others and fond of philanthropic and humanitarian work. You are very social, but can be short-tempered and even mean when your patience is tried. Patience and tolerance are qualities that don’t come easily to you.

Fourth Quarter (6:40-10:00 degrees Taurus): Pisces. Generous and compassionate, your benevolent nature endears you to others. People are drawn to your charismatic personality and you will likely experience fame and riches. However, deep down you desire more than materialistic gains—religion and spirituality are important to you.

The electional nature of Krittika is Mishra, “mixed.” Krittika is a versatile nakshatra and can be good for: