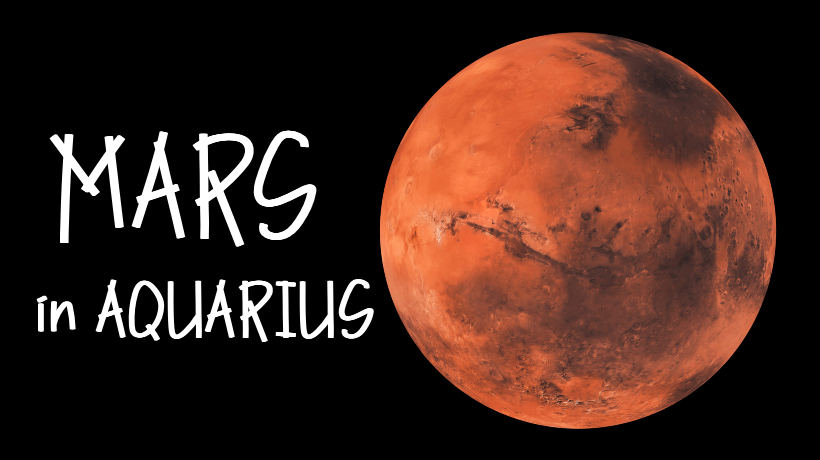 Aquarius is the eleventh sign of the zodiac. In Vedic astrology, Aquarius is known by the Sanskrit name kumbha, or “the water pot.” The sign of Aquarius possesses a intellectual, humanitarian, and goal-oriented nature. Aquarius is a sign of idealism. In an astrological chart, it indicates areas where you are philosophical and pragmatic in your efforts.

Ruled by Saturn. Saturn is known as the planet of karma, austerity, and mysticism. He brings a sober and mysterious energy to the house he inhabits.
An air sign. Aquarius is imaginative, logical, and curious.
A fixed sign. Aquarius is steady, predictable, and slow to change.
A masculine sign. Aquarius is aggressive, bold, and thick-skinned.

Traits of Mars in Aquarius

The influence of Mars in a birth chart will change depending on which house it is located in, its relative position in relation to other planets, as well as other factors. However, the following general traits are likely to be found in a native who has Mars in Aquarius:

You like to travel. You have a wandering spirit and you love seeing new places and experiencing new cultures. You hate being tied down to one place. However, this makes it difficult to establish any kind of stable life. You may find it difficult to keep a regular job, or stay connected with friends or family.

You may be unhappy with your life. You are somewhat of a pessimist, and you have a hard time seeing the many positive aspects of your experiences. Rather than learn from your mistakes, you tend to blame others. You do not like to accept responsibility for your faults. This makes it difficult to correct your shortcomings and adjust yourself, and so you may remain unhappy throughout life. However, by a practice of meditation and bhakti-yoga, you can transcend any material dissatisfaction and experience spiritual bliss.

You have difficulty earning money. You dislike work and you prefer to do things your own way. This makes it difficult to keep a job and please an employer. You wander from one job to another, and you do not save the money you earn. Instead, you waste it on trivial purchase, such as cigarettes, alcohol, video games, etc.

You have a cruel streak. You are not a very friendly person — for example, you are unlikely to reciprocate if others buy you a gift. You feel people get what they deserve, so you are not inclined to feel mercy or compassion toward them.

You may be dishonest. When it serves you, you do not hesitate to lie and even cheat others, especially when you think you won’t get caught. Remember that the law of karma is inescapable. Eventually whatever harm we cause others will come back to hurt us, possibly in a future lifetime.

Mars in Aquarius in the 12 Houses