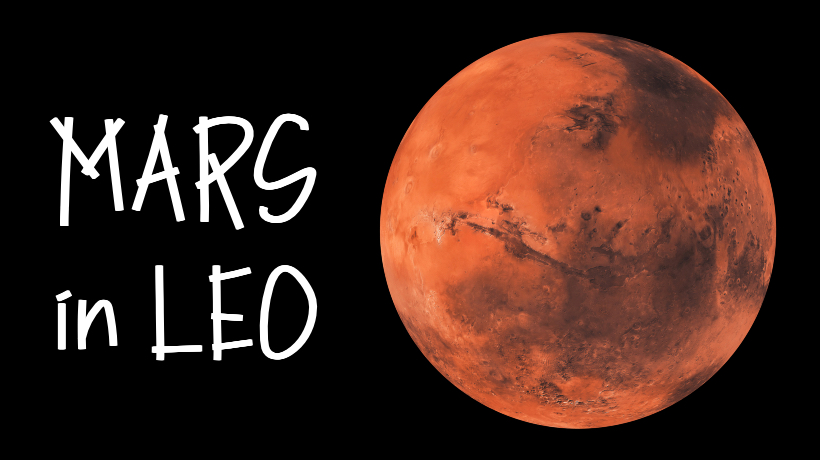 Leo is the fifth sign of the zodiac. In Vedic astrology, Leo is known by the Sanskrit name simha, or “the lion.” The sign of Leo possesses a noble, powerful, and intimidating nature. Leo is a sign of authority. In an astrological chart, it indicates areas where you are ambitious and righteous in your efforts.

Ruled by the Sun. The Sun is known as the planet of the self, status, and will-power. He brings an influential and imposing energy to the house he inhabits.
A fire sign. Leo is temperamental, passionate, and energetic.
A fixed sign. Leo is steady, predictable, and slow to change.
A masculine sign. Leo is aggressive, bold, and charismatic.

Leo influences its planetary lord in the following areas:

Traits of Mars in Leo

The influence of Mars in a birth chart will change depending on which house it is located in, its relative position in relation to other planets, as well as other factors. However, the following general traits are likely to be found in a native who has Mars in Leo:

You are very patient. You have the ability to wait a long time before you get your desired result. You are confident that with steady, patient effort, almost anything can be accomplished. Leo is a fixed sign, and this enables you to remain fixed in your determination until the day you finally achieve your goal.

You like to spend time outdoors. You enjoy time alone in the wilderness, whether roaming through the woods or hiking mountain trails. You also like camping, and you may consider yourself something of a survivalist.

You are a hard worker. When you take up a task or project you apply yourself unceasingly until you accomplish your goal. You are an intense worker, and others can rely on you to finish a difficult job.

You may have financial troubles. You are able to make good money through your work, but you also have a habit of spending money as quickly as it comes in. You aren’t very good at budgeting. For this reason, you may frequently find yourself in financial trouble.

You are courageous. You never shy away from a challenge, and you may even seek out danger for the thrill of it. Be careful not to act rashly or take on risks just for the adrenaline rush. If you channel your fearlessness and moderate it with discipline and an analytical approach, you can be a powerful leader in your community or workplace.

Mars in Leo in the 12 Houses