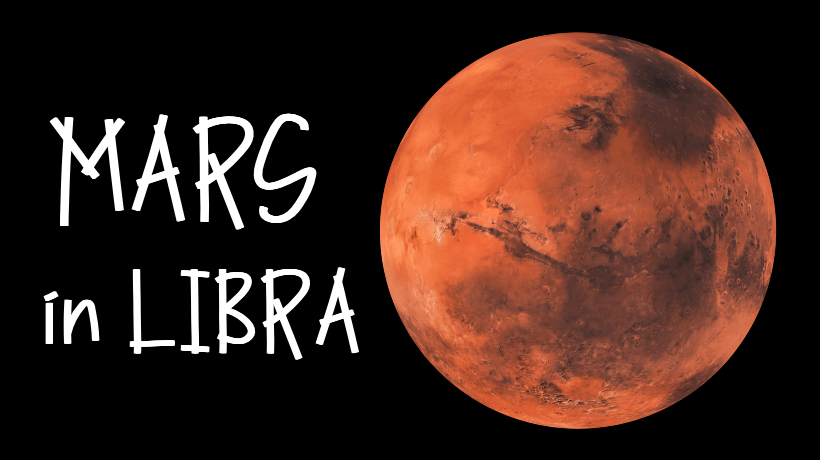 Libra is the seventh sign of the zodiac. In Vedic astrology, Libra is known by the Sanskrit name tula, or “the measuring scale.” The sign of Libra possesses a balanced, tasteful, and calculating nature. Libra is a sign of justice. In an astrological chart, it indicates areas where you are judicious and thoughtful in your efforts.

Ruled by Venus. Venus is known as the planet of music, fine food, and the arts. He brings a sensual and indulgent energy to the house he inhabits.
An air sign. Libra is imaginative, logical, and curious.
A moveable sign. Libra is fluid, spontaneous, and fond of change.
A masculine sign. Libra is aggressive, bold, and thick-skinned.

Libra influences its planetary lord in the following areas:

Traits of Mars in Libra

The influence of Mars in a birth chart will change depending on which house it is located in, its relative position in relation to other planets, as well as other factors. However, the following general traits are likely to be found in a native who has Mars in Libra:

You are very attractive. You have a striking and handsome appearance. You are considered very beautiful by the opposite sex. You enjoy dressing well and attending social gatherings where you can mix with other attractive people. You are likely to have many romantic partners in your life.

You are a heavy drinker. Be wary of alcohol — you are likely to become an alcoholic, and this can cause much trouble for you in life. It can negatively impact both your personal relationships as well as your professional career.

You like to fight. You are a combative and even argumentative person. This can be a strength if you find a career that suits this trait, such as in the military, or in the world of professional sports. That will give you a positive outlet for your competitive spirit, and you will be less likely to get into fights with friends and family.

You are very cunning. You have a strategic and scheming mind. You are a natural problem-solver and you love strategy games and puzzles. This can also be a skill you can utilize in your professional life.

You are a talkative person. You enjoy good conversations, and you are always ready to speak your mind. You find you are never without something to say, and others also like to hear you speak about different topics of interest. You bring passion and energy to any conversation or social gathering.

Mars in Libra in the 12 Houses