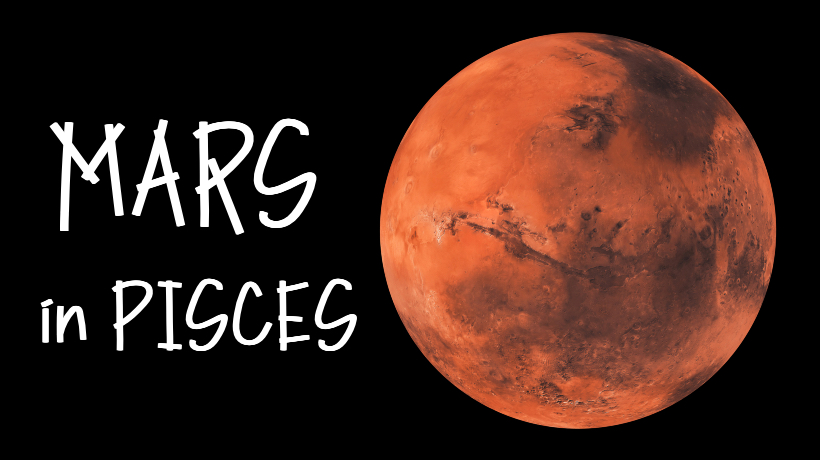 Pisces is the twelfth sign of the zodiac. In Vedic astrology, Pisces is known by the Sanskrit name meena, or “the fish.” The sign of Pisces possesses a soft-hearted, contemplative, and spiritual nature. Pisces is a sign of adventure. In an astrological chart, it indicates areas where you apply intuition and an aesthetic sense to your efforts.

Ruled by Jupiter. Jupiter is known as the planet of wisdom, devotion, and piety. He brings wisdom and a religious energy to the house he inhabits.
A water sign. Pisces is perceptive, artistic, and sentimental.
A dual sign. Pisces is adaptable and multi-talented.
A feminine sign. Pisces is receptive, sensitive, and empathetic.

Pisces influences its planetary lord in the following areas:

Traits of Mars in Pisces

The influence of Mars in a birth chart will change depending on which house it is located in, its relative position in relation to other planets, as well as other factors. However, the following general traits are likely to be found in a native who has Mars in Pisces:

You are fearless. You are brave and courageous even in the face of great difficulties. You take pride in your ability to stare down any opponent. You can use this quality to succeed in your professional life. However, some may find your character a bit jarring.

You occupy a good position in life. You are a hard-worker and you can rise to a high position in life and in your career in particular. You may become a manager or C-level executive. You like to have power and influence, and this will come to you in due course of time.

You have a sharp temper. You can become angry and even aggressive when things aren’t going your way. Be careful not to lash out at those who are close to you, otherwise you may ruin valuable relationships and friendships. This kind of behavior can also cause you trouble at work.

You do not respect your elders. You are somewhat arrogant, and this causes you to disrespect your teachers, elders, and others who have given you a lot in life. Be careful not to take their kindness for granted. Disrespecting teachers and mentors is a very dangerous habit. Eventually you will again require their help, but if you have hurt or offended them, then they will no longer be there for you.

You may suffer great emotional distress in life. You have a turbulent inner life, and you are likely to experience intense emotional highs and lows in life. In one sense, you seek these experiences out and relish the drama of your circumstances. This is a bad habit that you should try to give up through the practice of mindfulness and meditation.

Mars in Pisces in the 12 Houses