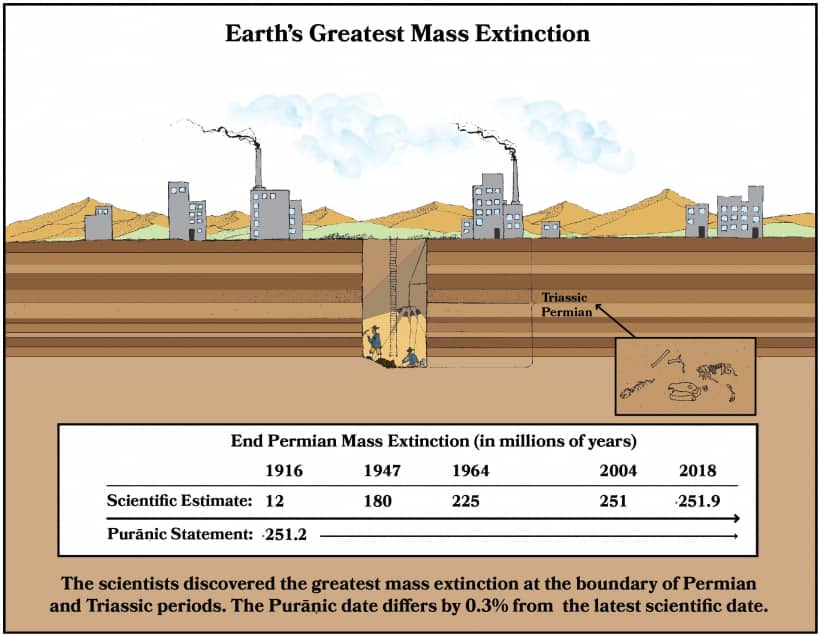 Life was flourishing on the Earth about 250 million years ago, then during a brief window of geologic time nearly all of it was wiped out. The Earth’s greatest mass extinction looked like a scene from the dreaded apocalypse.

The terrible event had been lost in the amnesia of time for eons. It was only recently that paleontologists, like hikers stumbling upon an unmarked grave in the woods, noticed a startling pattern in the fossil record: Below a certain point in the accumulated layers of earth, the rock shows signs of an ancient world teeming with life. In more recent layers just above that point, signs of life all but vanish.

Somehow, most of the life on Earth perished in a brief moment of geologic time roughly 250 million years ago. Scientists call it the Permian-Triassic extinction or “the Great Dying” — not to be confused with the better-known Cretaceous-Tertiary extinction that signaled the end of the dinosaurs 65 million years ago. Whatever happened during the Permian-Triassic period was much worse: No class of life was spared from the devastation. Trees, plants, lizards, proto-mammals, insects, fish, mollusks, and microbes — all were nearly wiped out. Roughly 9 in 10 marine species and 7 in 10 land species vanished. Life on our planet almost came to an end.

This was unprecedented in the 4.6 billion year history. Only in the 80’s, the paleontologists got clues of this destruction and it took them another 40 years to find the killers behind this mass extinction. No, it was not an asteroid, but a massive siberian volcanic extrusion which caused air to become poisonous, waters to become acidic and destabilized the planet’s climate. As late as 2002, and institutions as prestigious as NASA didn’t have much clue about the precise date and killers behind this mass extinction.

The View of the Puranas

On the contrary, the Puranas, which are thousands of years old, have this information recorded in them in great details.
According to the latest paleontological analysis, the greatest mass extinction occurred 251.9 million years ago, and the prominent killers in the mass extinction were: massive volcanic extrusion, acidic oceans, long droughts, and increased UV radiation.

According to the Puranas, which are encyclopedias of significant events in the history of the Earth and the Universe, the biggest pralaya or the mass extinction happened at the end of reign of King Satyavrata 251.2 million years ago. Moreover, the Matsya Purana records the same killing mechanisms as those of modern science. The Puranic date differs from the scientific date by a mere 0.3%.

Since the Puranas do not use years for recording large time periods, let me show you the calculation of this date from the Purana in terms of the Puranic time units. Before I show you the calculation, it is important to note that the Puranas are describing events on the plane of Bhumandala or the Puranic Earth, which is the higher-dimensional Earth all around us. We are living on a small 3-dimensional projection of the higher-dimensional Puranic Earth. I recommend watching my video: How Einstein saved the Vedas and A primer of Puranic time units prior to following me in this calculation. Returning to the calculation of date for the Earth’s greatest mass extinction. According to chapter 2 of the Matsya Purana, King Satyavrata was the king of Bhumandala towards the end of the last Manvantara. A Manvantara is a Puranic time period. Currently, we are in the 7th Manvantara or the Vaivasvata Manvantara and King Satyavrata was meditating towards the end of the 6th Manvantara or Caksusa Manvantara. He had a hunch that a terrible calamity was about to come over his kingdom and, therefore, he started meditating on the Supreme Person. He meditated for 2 million years before he had an interview with the Supreme Person, who told him to prepare for the upcoming cataclysm and assured him of protection. According to the Puranas, there is a massive cataclysm at the end of every Manvantara. However, according to the Supreme Person, Matsya Avatara, this cataclysm was going to be exceptionally severe. Thus, according to the Puranas, there was an unprecedented disaster at the end of the 6th Manvantara. According to Puranic references, King Satyavrata met the Supreme Person, Matsaya Avatara, during the last Satya Yuga of the 6th Manvantara.

Since scientific dates are always changing, why should we trust them? A series of dates for a particular stratum obtained over the course of decades that converges step-by-step on a specific value could mean that scientists are on the right track in dating this stratum. However, it is possible that an unknown source of error in the radiometric dating of the PTB produced spurious values over the last century, despite converging on a specific value.

In fact, the scientific method itself, which involves observation, experimentation and hypothesis, is no better than the capabilities of the experimenter, which are necessarily limited. Purāṇic epistemology, which is based on revelation from Devas or cosmic administrators, is fundamentally different because it doesn’t depend on the limited capabilities of an experimenter. Thus, the Purāṇas provide, for the first time, a fundamentally different source of knowledge for verifying scientific results.