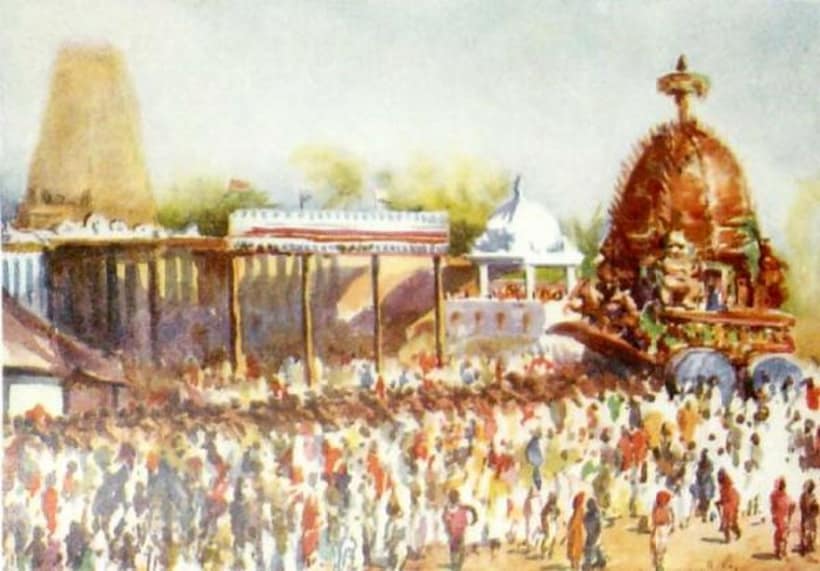 The Ratha-yatra is a grand chariot procession that takes place every summer in Odisha, India. Each year it attracts over 2 million people from all over the world, and it is the largest festival of its kind on the planet.

Ratha-yatra is celebrated every year on the Vamana Gaura Dvadashi, or the second day of the bright half of the month of Vamana. This year that falls on June 30, 2022.

In this article, you’ll learn about the origins of the festival as well as its significance for spiritual practitioners in the bhakti tradition.

The Origin of the Ratha-yatra

Although its exact date of origin is not known, the Jagannatha Ratha-yatra is by far the most ancient festival in the world that is still being observed today. In the Vedas there are descriptions of many different chariot festivals for special occasions, but none of them are as famous or highly-anticipated as the annual yatra in the district of Puri.

The Skanda Purana reveals that the Ratha-yatra has been an annual celebration at least since the reign of King Indradyumna, who was the monarch of Earth in Satya-yuga. This means that, according to the Vedas, the festival is at least 5.2 million years old.

The Skanda Purana narrates the story of King Indradyumna as follows:

Long ago King Indradyumna reigned over the earth. As the king his job was to ensure the material security and prosperity of his citizenry. First and foremost, this meant that he himself had to set an unassailable example of what it meant to be a good person. As Krishna teaches in the Bhagavad-gita:

“Whatever action a great man performs, common men follow. And whatever standards he sets by exemplary acts, all the world pursues.”
One day, a wandering mendicant visited the palace of Indradyumna. Considering him to be a holy man, the king graciously received him and offered him a fine seat, refreshing drink, water to wash himself, and clean cloth.

Moved by this exchange, the holy ascetic smiled and thanked the king for his hospitality.

“Please don’t thank me,” Indradyumna replied, “it is my duty to serve sadhus such as yourself. If you wish to repay me, please tell me about dharma, the duties of mankind. What is the highest truth? How shall I obtain liberation from the bondage of material existence? And how can I better serve my people as their protector and guide?”

“My king,” the holy man said, “surely you are already aware of these teachings. As the monarch you must have studied the Vedas under the guidance of the most excellent teachers. Still, for your pleasure I will answer the questions you have asked.

“The supreme dharma of mankind is loving devotional service to the transcendent Lord. As it is said in the Bhagavata Purana — sa vai puṁsāṁ paro dharmo yato bhaktir adhokṣaje. (Srimad Bhagavatam, 1.2.6)

“If you wish to obtain liberation from samsara, the simplest method is to worship Lord Krishna. He has descended to this world in His deity form in a nearby village on Mount Nilachala. You may go there and worship Him. He is known by the name Nila-Madhava.

“The best way to protect your citizens is to somehow or other engage them in acts of bhakti-yoga, or the path of loving devotion. If you install a similar deity here in your kingdom and hold elaborate, transcendental festivals, then this will bring the greatest benefit to you and your people.”

King Indradyumna looked down at his bare arms and saw they were covered in goosebumps. When the ascetic had pronounced the name “Nila-Madhava,” Indradyumna had felt a chill run up his spine.

“I must now continue my journey,” the mysterious sage said. “Farewell.” And with that he turned and left.

Indradyumna sat stunned on his throne for some time, not speaking a word. Then he summoned his ministers and told them to search all of Nilachala Mountain until they found the deity of Nila Madhava.

The Skanda Purana goes on to narrate how one of King Indradyumna’s ministers finally located Nila Madhava, but by the time he came back and brought the king to see the Deity, Nila Madhava had disappeared.

LEARN MORE: Want to know how Nila Madhava was found and later on appeared as Lord Jagannatha in the kingdom of Odisha? Check out our article, Jagannatha: Lord of the Universe.

Eventually, the deity Nila Madhava appeared to Indradyumna in a vision and told him that He would manifest in His deity form of Jagannatha in Indradyumna’s kingdom.

From then onward, every summer the people of Odisha have held an eight-day festival for Lord Jagannatha, known as the Festival of Chariots, or Ratha-yatra.

The Significance of the Chariot Festival

The Sanskrit word “ratha” can refer to any vehicle, such as a car or wagon. Traditionally, however, it is used to refer both to the chariots that Indian warriors used in battle as well as the chariots ridden by important people, such as a king or queen.

The Vedas use the analogy of a chariot to explain the relationship between the soul and the body.

“The individual is the passenger in the chariot of the material body, and intelligence is the driver. The mind is the reins, and the senses are the horses. The soul is thus the enjoyer or sufferer in the association of the mind and senses. So it is understood by great thinkers.” (Kaṭha Upaniṣad 1.3.3–4)

The underlying significance of the Ratha-yatra festival is Krishna’s longing to be reunited with His devotees in Vrindavan. In His heart, Krishna wishes to simply relax and play with His beloved friends, relatives, and girlfriends.

However, for the sake of setting a proper example for human society, He leaves the shelter of Vrindavan to annihilate the demoniac kings who have overtaken the earth. Of course, as the Supreme Lord, this is simply one of His lilas, or transcendental pastimes. The separation from His loved ones actually augments their love for Him, and His for them. Thus it is all part of an eternal drama that heightens the feelings of love between God and His devotees.

The Ratha-yatra is a festival that depicts the love-filled pain of separation that Krishna experiences while He is outside of Vrindavan.

Ratha-yatra Around the World

As a child, Abhaya Charan De — who would later become A.C. Bhaktivedanta Swami Prabhupada, the founder of the International Society for Krishna Consciousness (ISKCON)— organized his own eight-day Ratha-yatra festival on the streets outside his Calcutta home. All the local children attended, and the women of his neighborhood prepared many wonderful dishes to be offered to Lord Jagannatha and then distributed as prasadam, or sanctified food.

In his later years, Abhaya Charan adopted the renounced order of sannyasa and received the name Swami Bhaktivedanta. As a 69-year-old man, Swami Bhaktivedanta left India on a freighter ship with a mission to spread the teachings of Krishna all over the world. Much to the surprise of his countrymen, and against all reasonable odds, he was successful.

Within eleven years, Swami Bhaktivedanta established over 108 temples and communities on six continents, and he had attracted thousands of sincere followers.

As part of his global respiritualization effort, Swami Bhaktivedanta introduced the Jagannatha Ratha-yatra as an annual festival to be held by every major ISKCON community. Thanks to his sacrifice and pure example of selfless service, his disciples have continued this tradition through the present day, and now there are over one hundred Ratha-yatra festivals held annually throughout the world.