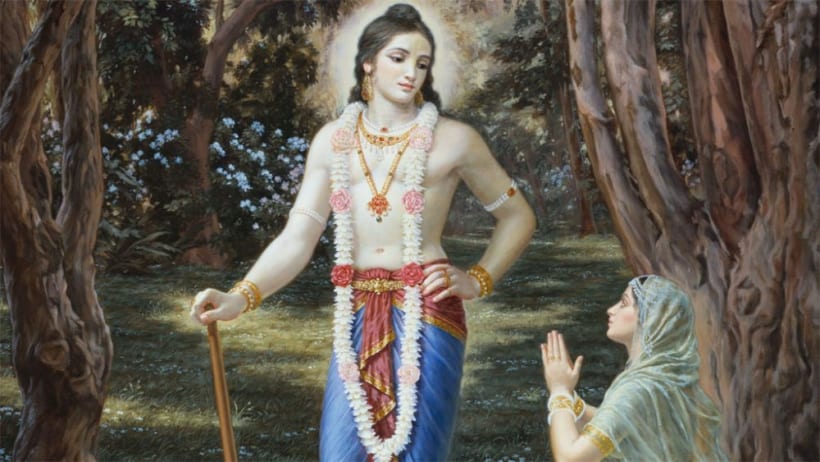 Many people wonder how the Vedas of India can speak of so many different gods and yet still advocate a monotheistic worldview. How can someone worship Krishna, Balarama, Shiva, Rama, and so on, while ultimately believing in only One Supreme Lord?

This article offers a conclusive answer to this important question, with a special discussion on the important role played by Lord Balarama, the older brother of the Supreme Lord Sri Krishna.

Although He is a complete manifestation of God and an eternal person in the spiritual world, Lord Balarama appeared in this world just five thousand years ago as the seventh son of Vasudeva and Devaki. God appears in this world at regular intervals for the purpose of enjoying Himself in different ways, like an actor performing on a stage. He also wishes to attract the living beings of this world to His service, which is their true purpose.

Balarama appeared as the older brother of Krishna, and the two of Them played like ordinary children in the village of Vrindavan for the first ten or eleven years of Their life. When Krishna left Vrindavan to kill Kamsa in Mathura and re-establish justice and peace throughout the world, Balarama accompanied Him. Together, They performed many wonderful pastimes which are described in detail in the Bhagavata Purana.

LEARN MORE: Read the full story of Krishna’s appearance as narrated in the Bhagavata Purnama.

The Source of All Incarnations

Lord Balarama is referred to in the Vedas as the Second Personality of Godhead. This means that He is the first expansion from the Original Supreme Lord, Sri Krishna. All subsequent incarnations — including Lord Ramachandra, Lord Vishnu, Lord Nrsimhadeva, and even Lord Shiva — expand through Lord Balarama. Balarama and Krishna are equal in every respect, except that Balarama always accepts the mood and role of a servant toward Krishna, just as an elder brother looks after and serves his younger brother.

Some of the most prominent forms of Lord Balarama include:

How Can One God Appear in Many Forms?

God is unlimited, and ultimately His powers are inconceivable to us. The Vedas explain that He takes on as many forms as necessary to reciprocate with the unique flavors of love of His devotees. The Srimad Bhagavatam says that Krishna has more forms than there are waves in the ocean:

“O brāhmaṇas, the avatāras, or incarnations, of the Lord are innumerable, like rivulets flowing from inexhaustible sources of water.” (Bhāgavatam 1.3.26)

An analogy given to help understand the relationship between these various forms is that of a candle flame. Just as one might use one candle flame to light another candle, and then another and another after that, similarly the forms of God are all identical in potency, but they still originate in a single source. The Vedas unanimously declare Krishna to be the Supreme Person, and they contain thousands of narrations of His different activities in various incarnations. As the first expansion of Krishna, Balarama is the fountainhead from which all of these different avatāras manifest.

In summary, all the various forms of God are eternal, and they are all ultimately one and the same Lord. However, the forms who expand from Krishna exhibit a spirit of deference or service toward Him, recognizing that He is their original source. This tendency is seen first in the person Balarama.

Balarama as the Original Guru

As the Second Personality of Godhead, Balarama is the first and best servant of Krishna. Like us, the minute living entities, Balarama also exists for Krishna’s pleasure. Because He is the closest to Krishna, Balarama is in the best position to direct the service of the unlimited living entities, the jīvas. He knows exactly what Krishna wants at any given moment. Thus the Vedas explain that Balarama is the adi-guru, or the original spiritual master from whom all true gurus descend in the spiritual lineage known as paramapara, or the disciplic succession.

When looking for a spiritual master, you must be careful to see how much they have adopted the mood of Balarama — do they present themselves as a humble servant of God? Or do they claim that they are God? Additionally, do they cite the Vedas and repeat Krishna’s teachings? Or do they present their own ideas and teachings as absolute? These are some very important questions to consider before accepting a spiritual teacher.