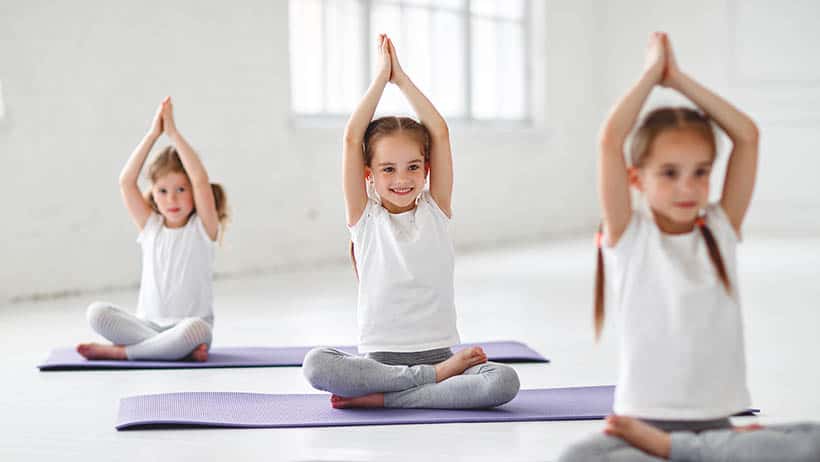 Kids need yoga just as much as adults. In fact, an increasing amount of research confirms the positive effects of yoga on children. Some schools in the United States and the United Kingdom now incorporate meditation sessions into the school day, leading to improved behavioral and academic performance. Check out this story about the effects one school observed when it replaced detention time with meditation practice.

When a teacher guides children through yoga movements, that adult gives them another tool they can use to explore their own free, creative, and expressive nature. That means practicing yoga with children will require teachers to allow for unlimited creativity and interpretation. The descriptive names of the various poses — such as animal names or objects like bridge and mountain — all provide opportunities to spark a child’s imagination.

Try these seven yoga poses with the kids in your life to encourage their creativity and help them effectively manage stress.

Kids love animal-named poses so let them get fully into character. Don’t be surprised if you hear some cow mooing and cat meowing.

Most adults practice this pose, which can prove challenging as a deep hip opener, in a quiet and meditative manner. However, squatting takes on a whole new energy in a children’s class.

Mountain pose may allow you to make a game of who can be the strongest, tallest, quietest, and most still mountain.

Is it a bird? Is it a plane? This pose provides a gold mine of playfulness for children.

The balancing aspect of this pose likely will lead to laughter, falling, and all kinds of bloopers. Go with it and, in the right moment, show the kids how to use their mindful, focused breath as an anchor and source of stability when exercising balance.

The corpse pose — known as savasana in Sanskrit — often proves challenging because it asks people to find complete stillness and surrender to a meditative, lucid sleep state. As a teacher, parent, or caregiver guiding children through a yoga practice, you should release any expectations you may have for how still the children will remain.

For more information on the benefits of yoga for children as well as additional yoga exercises and games to try, check out these resources: