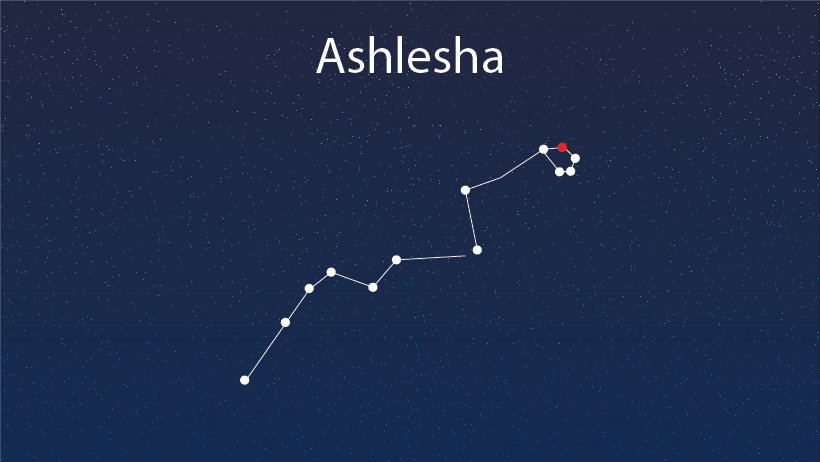 The nakshatras are small constellations of stars that the moon travels through as it orbits Earth. In English, nakshatras are known as “lunar mansions.” Ashlesha is the ninth of 27 nakshatras. If you were born when the moon was between 16:40-30:00 degrees Cancer, then this guide is for you. You’ll learn all about your strengths, weaknesses, compatibility, ideal careers, and more.

Every nakshatra has its own set of fixed attributes. This includes planetary ruler, nakshatra group, zodiac sign, deity, symbol, and power. The features of Ashlesha are below:

Sanskrit Name: अश्लेषा (Ashlesha). One meaning of Ashlesha is a “tight embrace,” indicating sensuality, attachment, and a seductive personality.

Planetary Ruler: Mercury. This planet is associated with the intellect, literature, logic, artistic expression, and commerce.

Nakshatra Group: Monstrous. Nakshatras are divided into three classes — monsters, humans, and gods. Ashlesha is a monstrous nakshatra. People in this group are generally intuitive, strong-willed, and assertive. They may be prone to anger and violence.

Zodiac Sign: Cancer. Cancerians are wise and perceptive, and gifted in their ability to read other people. They are nurturing, creative, and empathetic.

Deity: Vritrasura. In Vedic theology, Vritrasura is the powerful enemy of the king of the gods, Indra. Although he is Indra’s enemy, Vritrasura is also regarded as an exceptional spiritualist and great devotee of God.

Resonant Syllables: In India, the birth nakshatra is traditionally used as one means of choosing the name of a child. The corresponding syllables for the four quarters (padas) of Ashlesha are Dee (डी), Do (डू), De (डे), and Doe (डो). The syllable of a person’s first name is sometimes used when calculating an astrological chart if the time of birth is unknown.

The influences of Mercury and Cancer make Ashlesha natives very mentally active. You are smart and have a thoughtful nature, often contemplating things deeply and questioning what others might accept at face-value. Philosophy interests you and you can discuss theoretical concepts with ease. You are gifted academically and are likely to receive a good education.

There’s not much that gets past you — astute and intuitive, you have an almost mystical ability to penetrate right to the heart of any situation. This holds true with people as well. Those who meet you might feel that you see straight to their souls.

Self-restrained and austere, you are able to control yourself perfectly in most situations. You don’t rely on anyone else and take pride in your independence. Although you are satisfied to act on your own, others can’t help but be drawn to you. A magnetic, seductive quality makes people seek after you. This ensures that, when you do want it, you always have a ready companion.

Thanks to Ashleshas’ extraordinary intelligence, they do well in almost any career that utilizes their intellect. It may be difficult for them to work in positions where they don’t have enough independence.

Note: Ashleshas may also be inclined to work in the sex industry.

The downside of your self-reliance is that it makes you detached, and sometimes unappreciative of what others have done for you. Your indifference to who or what passes in and out of your life can make you behave irresponsibly — you may not care enough to put in the hard work. Without even trying to, you may make other people feel like they aren’t good enough.

You can be reclusive, often preferring your own company to that of others. Your hot temper and love for competition can make you sharp and insensitive. Because you are unusually perceptive, you are able to cut deeply and accurately when provoked. Although you may believe that you don’t need anyone else, be careful not to unintentionally burn all your bridges.

Clever and cunning, you may create mischief for the sake of it. You are talented at deception and have a tendency to lie — not only to others but also to yourself. At heart, you are idealistic and you may become anxious and melancholy when reality doesn’t match up to your ideals. Happiness will come to you more easily if you gain the courage to face life as it really is, and moreover feel gratitude for all that it offers.

You are a rule-breaker. You won’t abide by established norms just for the sake of tradition, and this allows you to think outside the box. However, you also break rules that perhaps shouldn’t be broken in order to achieve your goals.

You are a skilled writer and speaker. Mercury’s influence ensures skill with language. Whether on the page or in speech, you are able to communicate well and impress others with your ideas.

You may have stomach problems. This could stem from a difficulty in controlling your diet. Utilize your self-restraint to moderate your diet, and eat wholesome, healthy foods.

You are possessive. Ashlesha is sometimes referred to as “the clinging star.” When you become fixated on something, you have difficulty letting it go.

You may have affairs. A fascination with sexuality and your disregard for rules and constraints may lead you into multiple love affairs.

You are powerful. There is no question that you have the ability to do great things — your power is evident to everyone you come across. You are not a good person to cross, because when provoked you are capable of destroying your antagonizers.

Ashlesha sexuality is symbolized by a male cat. In terms of physical compatibility, this makes them an ideal match for persons born under Punarvasu nakshatra.

Based on holistic matching, Ashleshas are most likely to find happiness in long-term partnerships with:

First Quarter (16:40-20:00 degrees Cancer): Sagittarius. You are wise, and not afraid to let others know it. You are often authoritative. You have no problem making decisions or guiding people in the direction you believe to be right. You are hardworking and devoted to your religious faith.

Second Quarter (20:00-23:20 degrees Cancer): Capricorn. You are ambitious and intelligent. You may have trouble setting moral boundaries for yourself. Although ambitious, you can also be lazy and prefer to speculate and plan while others do the legwork. You can become isolated in your own mind and worry excessively — this can make you somewhat unbalanced if you don’t offset your mental absorption with regular exercise and engage in activities that serve the needs of others rather than your own.

Third Quarter (23:20-26:40 degrees Cancer): Aquarius. You are attracted to the esoteric and spiritual, and at times you yourself seem quite mystical. Often, your closest friends and family won’t know what is going on inside your head. You always have some scheme up your sleeve. Private and secretive, you may create unnecessary distance between yourself and others. However, altruism is one of your defining characteristics — your concern for humanity is what gives your life meaning and purpose.

Fourth Quarter (26:40-30:00 degrees Cancer): Pisces. You are scholarly and are well-versed in the literature of the world, but your curiosity isn’t limited to what can be learned in books. You see the world itself as an opportunity to learn, and you love to travel and see its wonders. Romance and adventure appeal to you. You may spend money extravagantly.

The electional nature of Ashlesha is Tikshna, “sharp” or “intense.” Ashlesha is a good nakshatra for: