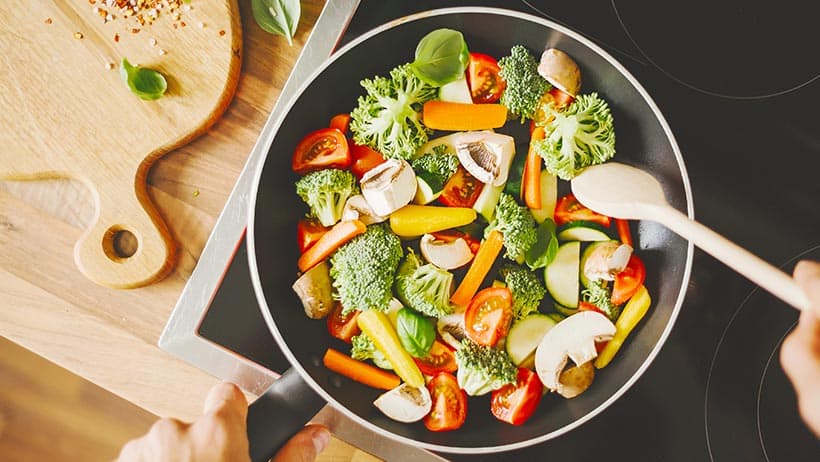 Eating some vegetables in raw form offers more nutritional value because the cooking process can destroy certain nutrients and enzymes. As a result, some people turn to a completely raw diet in order to reap those benefits.

Yet, not all produce provides a healthier bite when eaten raw. Cooking actually can increase the availability of nutrients in certain vegetables. Read on to learn about six foods that offer more nutritional value when cooked.

Research on five types of edible mushrooms found that cooking increased the amount of vitamin C (ascorbic acid) and flavonoids in the mushrooms. Vitamin C plays an important role in the human body by boosting the immune system, protecting against cardiovascular disease, aiding iron absorption, and even helping to prevent wrinkles. Flavonoids, the compounds that give plants their color, help reduce inflammation and have a protective effect against cancer and chronic disease.

Dr. Weil, a well-known doctor who practices integrative medicine, even recommends not eating raw mushrooms at all, calling them “essentially indigestible.” Raw mushrooms also contain toxins, including some carcinogens, which he cites as another compelling reason to always cook them before eating.

Eating cooked spinach provides many benefits. For example, you can eat much less of it to obtain the same amount of macronutrients. A 100-gram serving of spinach equals about 3.33 cups of raw spinach and only a half cup of cooked spinach.

Raw spinach also contains high levels of oxalates, substances that interfere with the human body’s ability to absorb calcium and iron. Ingesting oxalates at the same time as calcium- and iron-rich foods can hinder absorption of those nutrients. However, cooking reduces or destroys oxalates in spinach.

Yet, you don’t need to give up raw spinach entirely. In fact, cooking spinach reduces its vitamin C and vitamin K content so eating raw spinach offers some benefits. The key here is balance, ensuring you regularly eat spinach in both raw and cooked forms.

Carotenoids give an orange, red, or yellow color to certain vegetables like carrots and tomatoes. Three well-known carotenoids include beta-carotene, lycopene, and lutein. Carotenoids benefit human health in many ways and ultimately reduce the risk of some cancers and eye disease.

A study on how various cooking methods affect foods found boiled carrots contain more carotenoids than raw carrots. Steaming carrots increased the amount of certain carotenoids while decreasing others, and frying carrots decreased their total carotenoid content. That means both the decision to cook a vegetable — along with the specific cooking method — can affect their nutritional value.

Similar to spinach, cooking bell peppers offers both benefits and drawbacks. Heating bell peppers makes them more nutritious by increasing the level of carotenoids, such as beta-carotene. The lycopene in red bell peppers also increases with heat, and lycopene helps protect the body from certain diseases like cancer and heart disease.

However, cooking bell peppers also reduces their vitamin C content. Eating both raw and cooked bell peppers regularly will help you obtain the most nutrients from these veggies.

Yet, despite the popularity of shaved, raw asparagus, this vegetable provides more nutritional value when cooked. Why? Asparagus has very thick cell walls, which cooking softens. That softening enables the human body to more easily digest asparagus and absorb its many nutrients.

Eating raw foods can provide many benefits, but research shows cooked foods also have a place in a healthy human diet. However, vegetables deliver the most nutritional value after minimal cooking. The longer you cook a vegetable, the more nutrients it can lose. Studies found that steaming and microwaving vegetables represent ideal cooking methods while boiling and frying often lead to increased nutrient loss.