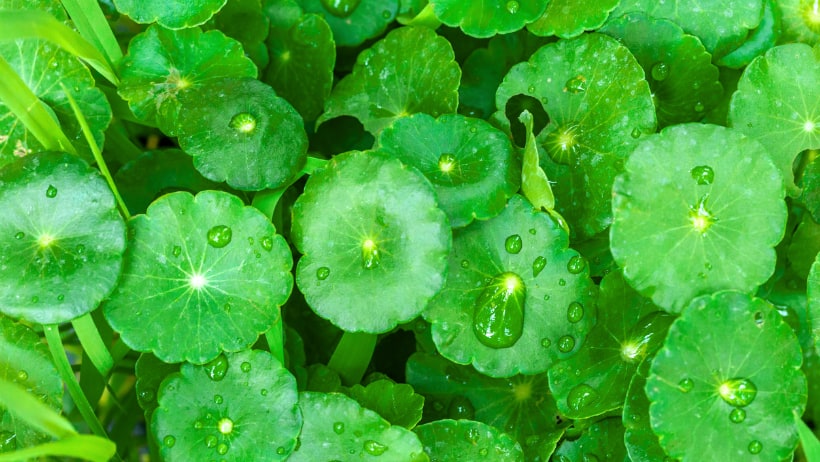 If you are looking to become cool, calm and grounded, and increase your ability to focus on the task at hand, then gotu kola is your greatest ally. gotu kola helps restore balance to the body and optimise mental performance. Most famous for its ability to increase memory capacity, strengthen the nervous system, and heighten consciousness, gotu kola has been called the ‘herb of enlightenment’ and ‘friend of the brain’.

In Northern India, gotu kola is also known as “brahmi.” However, this can cause confusion as there is in fact another (more widely recognized) herb that goes by the name brahmi: Bacopa Monnieri. Most ayurvedic practitioners will refer to the herb Centella asiatica by its Singhalese name, gotu kola, and refer to Bacopa monnieri as Brahmi. It is worth familiarizing yourself with the Latin names of the herbs to avoid any mix up when purchasing brahmi. This article is in reference to Centella asiatic (gotu kola).

What is Gotu Kola?

Gotu Kola (Centella asiatica) is celebrated in almost all Eastern medical traditions for its positive effect on memory, focus and brain function. Traditional Chinese medicine and Ayurveda are particularly favourable towards gotu kola for its promotion of alertness and cognitive awareness.

Gotu Kola is a creeping perennial plant native to the moist, hot climates of South and South-East Asia. It is a member of the carrot family and is related to many commonly found kitchen herbs and spices, such as parsley, cumin, and fennel.

Gotu Kola itself has a very nice flavour — the leaves can be eaten directly from the plant by humans and animals alike. It is said to be one of the favourite snacks for elephants, and legend states that this is the reason elephants have such a long life and excellent memory. It is commonly eaten raw in salads or as a fresh juice in many Asian countries. In the West, it is more frequently found as a tea or supplement.

Gotu Kola is tridoshic, meaning that is supports all three of the doshas. It grounds Vata, tonifies Pitta, and reduces excess Kapha. It is also an adaptogenic herb, helping the body to cope in times of stress.

When to Take Gotu Kola

Gotu Kola is an excellent herb for overall health and well-being. Many people will take Gotu Kola just to support their body and brain throughout everyday life, but it is particularly beneficial for those dealing with high levels of stress or whose lifestyle is demanding for the intellect. Anyone who is studying or works their brain hard could benefit from Gotu Kola. Similarly, anyone suffering from brain- or memory-related disease or degeneration would benefit from Gotu Kola.

How to Use It

While in many Asian countries fresh Gotu Kola can be purchased and added to salads or meals, in the West it is more commonly found in its dried form. Dried Gotu Kola can be used in tea or in capsules. Powdered Gotu Kola can also be stirred into warm or room temperature water. It can also be found as a tincture, or infused into sesame oil for external topical application.

Very few negative side effects of Gotu Kola have been recorded, however it is best avoided for those who are pregnant or about to undergo surgery. As with adding any new herb or medicine to your regime, it is always best to consult with a doctor or Ayurvedic practitioner, particularly if you have any symptoms to take into consideration.

An allergic reaction to Gotu Kola could present itself as redness or itchiness on the skin, or an upset stomach and nausea.