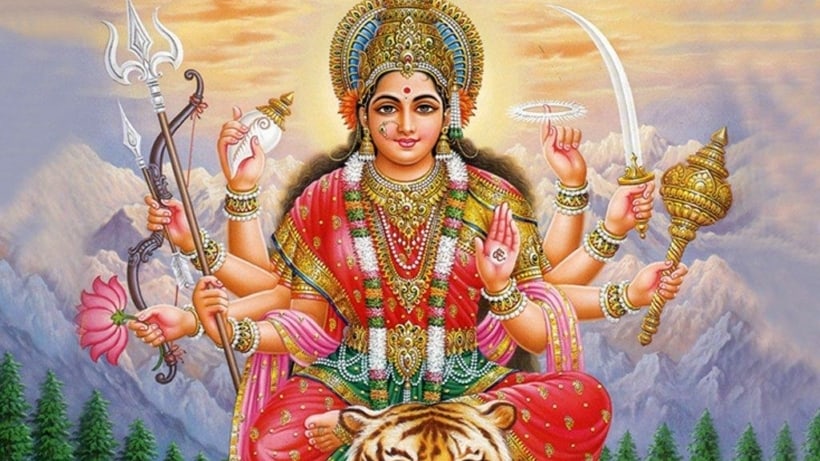 Many people have heard of Shiva and Durga, the god and goddess of this material universe. However, they often don’t know that Shiva and Durga ultimately consider themselves devotees of Krishna.
Durgastami falls on the eighth day of Navaratri, a nine-day festival honoring Goddess Durga. This year it falls on October 13. In this article we explore Durga’s position as the personification of the material energy, as well as the different names by which she is known in this world.

Durga-devi is well-known as the bride of Shiva. And as a chaste wife, she follows her husband in all respects. What many people do not know is that Shiva is actually a devotee of Krishna. This is seen throughout the Vedas. For example, the Srimad Bhagavatam calls Shiva “the best of all Vaisnavas” (vaiṣṇavānāṁ yathā śambhuḥ). Shiva himself tells his wife, Parvati, that he is a devotee of Krishna:

“Of all types of worship, the worship of Vishnu (Krishna) is the highest.”

However, seeing his wife somewhat discouraged due to her great affection for her husband, Shiva then spoke the next line:

When Parvati heard this, she became very happy, because she knew her husband to be the best of all Vaishnavas, or worshipers of Vishnu.

The Vedas explain that God is much more than an impersonal being who is devoid of qualities. God possesses unlimited energies, among which three are most prominent:

Goddess of the Material World

“The abode of the external energy is called Devī-dhāma, and its inhabitants are the conditioned souls. It is there that the material energy, Durgā, resides with many opulent maidservants.” (Caitanya-caritamrta 2.21.53)

The worship of Goddess Durga goes back many millions of years. Ancient stories in the Vedic Puranas describe many famous devotees of Parvati. However, the Puranas further reveal that such worship was traditionally viewed as auxiliary to the primary worship of the Supreme Lord, Sri Krishna. As devotees themselves, Durga and Shiva are eager to help conditioned souls break free of the bondage of material consciousness and realize their true nature as eternal servants of God.

As the personification of the Lord’s external, illusory potency, Durga-devi expands her energies as the three modes of material nature, which delude the conditioned souls into identifying with matter and forgetting their eternal spiritual existence. She rides on a tiger chasing down and punishing sinful solus. However, by the practice of bhakti-yoga, culminating in surrender and service to Krishna, one can overcome this fearsome aspect of Maya-devi (Durga). As Krishna tells Arjuna:

“This divine energy of Mine, consisting of the three modes of material nature, is difficult to overcome. But those who have surrendered unto Me can easily cross beyond it.” (Bhagavad-gita 7.14)

The Fourteen Names of Durga

In the Srimad Bhagavatam, a list of fourteen different names are given for Durga. Like a mother watching over her children, Durga feels great affection for all the souls in this world, and when they pray to her for aid, she quickly reciprocates. However, the material boons or blessings one might receive are ultimately temporary. Only bhakti is eternal. All other assets are destroyed with the body at the time of death.