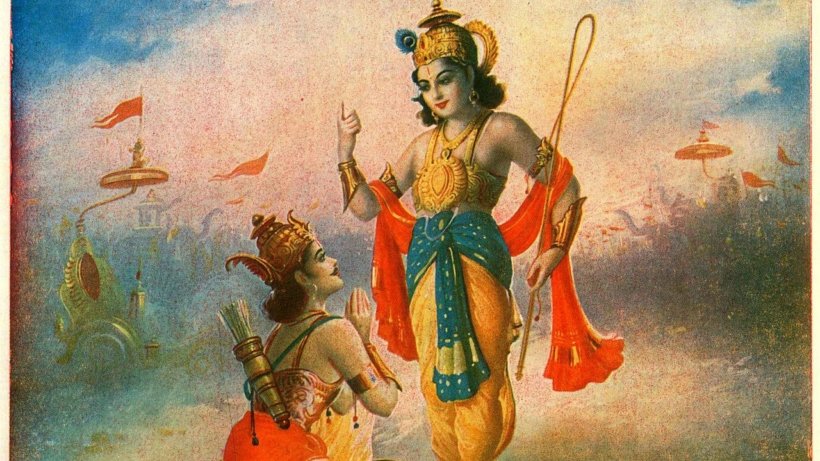 Along with words like “karma,” “yoga,” and “guru,” bhakti is another one of those Sanskrit words that has made its way into the English language over the past decades.
In this article, we explore the original meaning of “bhakti” and why it’s an essential term to know for any spiritual seeker or yoga practitioner.

One Indian saint named Jiva Goswami has traced the meaning of bhakti to its etymological root, which is described as follows in the Vedic text known as the Garuda Purana:

“The verbal root bhaj is used specifically in the sense of seva, or service. Therefore, when spiritual practices (sadhana) are performed in the consciousness of being a servant, they are called bhakti.”

According to this verse, bhakti first and foremost means service. When we recognize that our ultimate identity is as a servant of the Supreme, and then act in that capacity, we are performing bhakti.

Along with words like “karma,” “yoga,” and “guru,” bhakti is another one of those Sanskrit words that has made its way into the English language over the past decades.

In this article, we explore the original meaning of “bhakti” and why it’s an essential term to know for any spiritual seeker or yoga practitioner.

Bhakti is the Innate Nature of the Soul

Everyone has a natural tendency to serve others. An intrinsic part of being human is to want to help people, whether it is our family, friends, or even a stranger on the street. This longing to be of service is an indirect expression of the soul’s longing for God in a relationship of bhakti, or devotional service. As the Srimad Bhagavatam explains, bhakti is the innate nature of the soul:

“The supreme duty [dharma] for all humanity is that by which men can attain to loving devotional service unto the transcendent Lord. Such devotional service must be unmotivated and uninterrupted to completely satisfy the self.” (Srimad Bhagavatam, 1.2.6)

In Sanskrit, the word dharma means that which sustains us. It is our innate, fundamental quality and duty. If we neglect it, we cease to function as human beings. We degenerate into animals, like dogs snarling and fighting over a scrap of meat.

By contrast, performing bhakti subdues our animalistic tendencies and magnifies the pure, spiritual qualities of the soul: compassion, friendship, wisdom, purity, and grace. All these and more become prominent in the life of a bhakti-yogi.

Bhakti is for Sri Krishna, Not Others

Although as human beings we have the freedom to try to serve anyone we like, bhakti only works when it is directed at Krishna, who is the Ishvara, or Supreme Controller. As the origin of all and maintainer of all, the ultimate source and shelter, Krishna is the rightful object of service.

We may have some attachment to a parent or teacher, or even a demigod, but in the course of our life our attachments inevitably change. This reveals that they are material in quality. Material sentiments are temporary. Only bhakti, the pure emotion of the soul, is eternal, and it accumulates within us over many, many lifetimes.

As bhakti is eternal, it must accompany an eternal relationship. Otherwise it cannot be true bhakti. Therefore, bhakti can only exist in relationship with Krishna, who is our eternal friend, guide, and guardian. Only Krishna knows us, sees us, and loves us from one life to the next, and the next, ad infinitum. No other relationship can withstand the crushing weight of time.

Bhakti is Krishna-Centered, Not Selfish

Sometimes people argue that bhakti is selfish, because, externally, it doesn’t appear to help other human beings. However, we must remember that we human beings are not meant to serve one another at the expense of our service to Krishna. Factually, He alone is the only true companion or relation. As rays of light emanate from the sun, we all emanate from Krishna. He is the root of the tree of existence. By directing our serving spirit toward Him, we automatically fulfill the purpose of our existence and simultaneously bring pleasure to Krishna, ourselves, and all others in the process.

With this in mind, bhakti must be performed according to Krishna’s instructions. These are elaborately explained in the Vedic literatures, in particular the Bhagavad-gita and Srimad Bhagavatam. Another saint from India, Rupa Goswami, has defined bhakti as follows:

One should be completely free from all material desires and should serve Kṛṣṇa simply to please Him. This is bhakti. It is the cultivation of the soul’s serving spirit, culminating in divine love, or prema.

Bhakti is Not Mixed with Other Desires

Pure bhakti is devoid of any self-centered, ulterior motives, such as the pursuit of worldly pleasure or liberation from material suffering. A bhakti-yogi is fully satisfied simply fulfilling the wishes of Krishna, just as a loving wife or husband enjoys preparing a delicious meal for their beloved. However, the sentiments experienced in bhakti are not material. They arise from the soul when contact is made with Krishna through service.

To the degree one can ignore the mind’s restlessness and curb its self-serving desires, one will be able to focus on krishna-bhakti. Then one will experience spiritual bliss. The best method for practicing bhakti is to chant Hare Krishna, the Mantra Avatar of Krishna, and read Srimad Bhagavatam, the Book Avatar of Krishna. These two together will help the yogi make rapid progress in spiritual life.

LEARN MORE: Read our article about the Srimad Bhagavatam or read the Bhagavatam for free online.