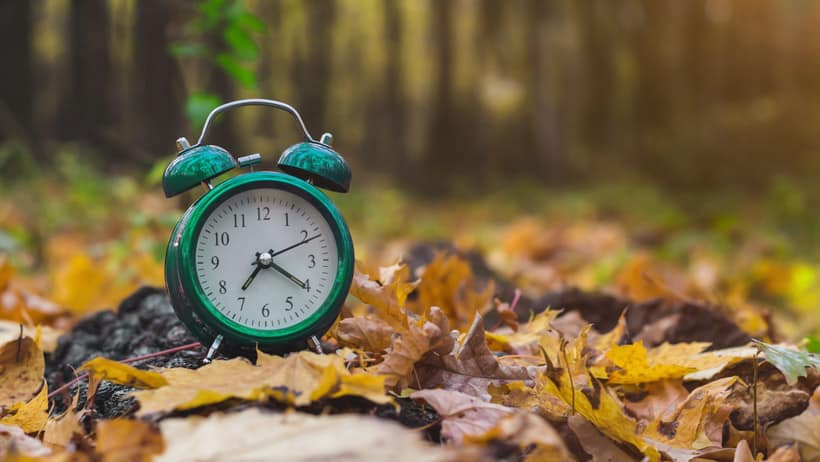 According to the Vedas, time is eternal. Unlike the prominent Western concept of linear time, the Vedas explain that time is cyclical. There is a popular saying in America that “you only live once.” However, the Vedas are clear that both consciousness and matter are eternal. This is supported by Newton’s law of the conservation of energy. In reality, nothing is ever created or destroyed — the energy is simply rearranged. As Krishna tells Arjuna in the Bhagavad-gita, the soul is eternal:

“Never was there a time when I did not exist, nor you, nor all these kings; nor in the future shall any of us cease to be.” (Bhagavad-gita 2.12)

In contrast to the linear view of time, the laws of karma and reincarnation shows how time and nature are in fact cyclical. Each year we rotate through four seasons. The moon waxes and wanes in its repeating revolution of the earth. Similarly, the soul experiences birth, youth, adulthood, old age, and finally death, only to relive this cycle in a new body, exposed to a new variety of experiences.

In this article we dive into the difference time units in Vedic time — from less than a second all the way up to the age of a universe.

Although some modern scholars say that the Vedas were written during the Vedic period of ancient India, the Vedas are actually much, much older. It is well known that Indian history, as recorded in the ancient Puranas, goes back millions of years.

“The Hindu religion is the only one of the world’s great faiths dedicated to the idea that the cosmos itself undergoes an immense, indeed an infinite, number of deaths and rebirths. It is the only religion in which the time scales correspond to those of modern scientific cosmology. Its cycles run from our ordinary day and night to a day and night of Brahma, 8.64 billion years long. Longer than the age of the Earth or the Sun and about half the time since the Big Bang.”

Although time is eternal, it can nonetheless be measured in different ways. However, even the largest of units represent a minute sample of the totality of eternal time.

On the macrocosmic scale, there are three primary units of time: kalpa, manvantara, and yuga.

The Vedic view of the universe has as its basic unit a day of Brahma. This is known in Sanskrit as a kalpa. Brahma the creator of the universe is the first living being generated from Sri Vishnu after the creation, or “Big Bang” event. Brahma’s lifespan is the duration of one universe, from the time of the “Big Bang” to the time of universal annihilation, when the entire cosmos is reabsorbed into Vishnu, who rests on the cosmic ocean.

One kalpa is equal to approximately 8.64 billion solar years.

Smaller than a kalpa, a manvantara is the duration of the reign of a single Manu, a higher-dimensional leader of the realm of Bhu-loka, which includes our Earth planet.

The chatur yuga, or four-part yuga cycle, is the smallest of the cosmological time units. Its duration is 8.64 million solar years. One thousand chatur yugas is equal to one kalpa.

In addition to these three primary cosmological units of time, there are two additional units which are used less frequently:

Maha-kalpa: Also known as a brahmanda, the maha kalpa is the duration of one hundred kalpas, or the lifespan of Brahma.

Prarardha: This is 1/2 of a maha-kalpa, or one half the lifespan of Brahma.

In addition to providing highly accurate time scales for the cosmos, the Vedas also contain time units of very small duration, from atomic time all the way up to a human year. Below is a table of these units:

It’s clear that these time measurements are optimized for human use, with units becoming more complicated the smaller they get. The opposite is also true with time scales larger than usual for us. For more details, all these small and large time scales can be found in the Srimad-Bhagavatam.

A Closer Look at the Four Yugas

The chatur yuga can be further broken down into its four parts:

Satya yuga: This is the first age in the chatur yuga. During this time, inhabitants on Earth are endowed with meditative insight and mystical capabilities due to being adept in yoga. The prescribed duty for mankind is meditative trance. Satya yuga lasts for 1.728 million years.

Dvapara yuga: This is the second age in the chatur yuga. During dvapara yuga, people on Earth have lost some of their focus in spiritual pursuits. As a result, Vyasa reintroduces the Vedas and the institution of varnashrama. The prescribed duty for mankind is nonviolent sacrifice. Dvapara yuga lasts 1.296 million years.

Treta yuga: The third age in the chatur yuga, treta yuga sees the human population somewhat more degraded. Theft, exploitation of the masses by leaders, warfare, and other forms of conflict become more commonly seen. However, human beings are still conversant in the Vedas, and the process of God consciousness is still central to worldly affairs. The prescribed duty for mankind in treta yuga is worship of the Deity. Treta yuga lasts for 864,000 years.

Kali yuga: The fourth and final age in the chatur yuga, kali yuga is characterized by widespread conflict and violence among the human race. Religiosity and morality are virtually gone, and in their place are hypocrisy and deceit are embraced and lauded. The prescribed duty for mankind is chanting the names of God, sankirtana. Kali yuga lasts for 432,000 years.

Where Are We in Vedic Time?

In the Vedic time scale we are in the first day of the 51st year of Brahma, in the seventh manvantara, in the beginning of Kali yuga. Approximately 5,000 years ago Kali Yuga began, after the manifestation of Lord Sri Krishna on this planet Earth, the recitation of the Bhagavad-gita, and the great battle of Kurukshetra.

“No one knows where time began and where it ends, and it is time only which can keep a record of the creation, maintenance and destruction of the material manifestation. This time factor is the material cause of creation and is therefore a self expansion of the Personality of Godhead.”

When theoretical physicist, Dr. J. Robert Oppenheimer witnessed the detonation of a nuclear bomb in 1945, he recalled the following line from Bhagavad-gita:

“I am become death, the destroyer of worlds.”

Literally, the word kala in this verse signifies time, as in, “Your time is up.” Oppenheimer’s close colleague, Dr. Albert Einstein was noted for having conceived of time as being a dimension, akin to space, and forming a spacetime continuum.

In this conception, most scientists hold that as a dimension, time differs from space because you can’t move around freely within it. It only flows forward. That said, if it turns out we can travel back in time, we’ll be sure to inform ourselves before publishing this article.

Time is shown in this verse in its objective entropic role of constant, inevitable, all-extending demise. In this sense, Dr. Oppenheimer’s equation of time with death is profound and apt. Therefore, it is described as a representative of the Absolute, or God.

Bhagavad-gita clarifies what time is in and of itself, so that our subjective experiences of it can be contextualized within a universally shared reality. On that note, Bhagavad-gita has its own historical, cultural and philosophical contexts.

More than a bird’s eye view of these is not possible here, but a good start is to think of Bhagavad-gita as a concise 700-verse introduction to the same subjects which are scrutinized within the broader discourse of Vedic literature.

Aside from prehistoric precision timekeeping, the Third Canto of Srimad-Bhagavatam touches on why time flies when we’re having fun, and watched pots never boil. These relate to our subjective experiences of time.

It is when time is subjectively perceived that the three modes of material nature come into play. In goodness, we try to prioritize our time for ultimate well-being. Passion drives the effort to control time for personal gain, and in ignorance, the value of time is altogether neglected.

“I wasted time, and time doeth waste me.”

In this way, the modes filter our perceptions of time, yet it remains the equalizing force which unites us, whether we perceive it or not.

A Meditation on Time

In his poem, The Jiva Soul, Bhaktivinoda Thakura writes:

Forget the past that sleeps and ne’er
The future dream at all,
But act in time that are with thee
And progress thee shall call.

Yoga paths help us transcend the influence of the modes of nature, allowing us to progressively see the objective face of time as entropy. These paths also alleviate anxiety over the future and lamentation about the past. Certainly there’s more to be said, but for now, we’re out of time.