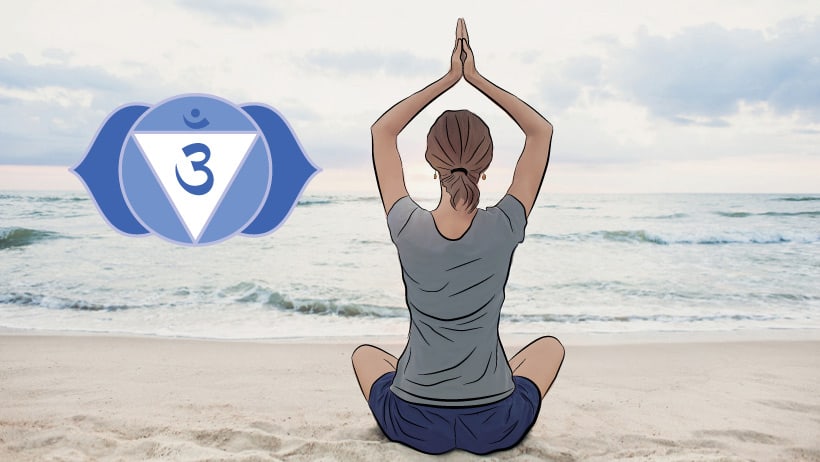 The ancient science of Ayurveda describes the human body as both physical and energetic. Every human being has seven chakras which act as interfaces that relay information between the body of flesh and bone and the subtle, energy body that operates our sensory and emotional response systems.
In this article, we give a detailed overview of the sixth chakra.

What are the Chakras?

Thinking of the human being’s nervous system as a powerful radio station provides a helpful analogy for visualizing how it works.

First, imagine the spine as a radio tower. Sensory information is transmitted to the spinal column via the five senses, which act as satellite receivers. Then, this information is sent up the vertebrae to the central control room, the brain, where it is displayed on the screen of the mind.

The chakras are energetic filters that direct the in-out flow of feeling and perception, based on your personal genetic program. When your chakras operate at peak performance, you feel amazing. However, when they are overworked, obstructed, or repressed, you experience various physical and mental ailments.

By adopting healthy habits and cutting out harmful lifestyle choices, you can bring your chakras into balance and experience a huge boost in happiness and well-being.

The Sixth Chakra at a Glance

Each of the seven chakras has defining features that make it unique. Below is the profile of the third eye chakra, known in Sanskrit as आज्ञा (ajna — pronounced “uh-gya”), meaning “the authority.”

Physical location: The forehead. By bringing your awareness to the carotid plexus, or the bundle of nerves slightly above and behind your eyes, you can feel the energy of your sixth chakra.

Developmental stage: Twelve to eighteen years. During adolescence, we solidify our self-image and our basic understanding of the world around us.

Chief domains: Intuition, foresight, and abstract thinking. The third eye chakra shapes our vision of reality and what we see as possible.

Element: Mind. In Indian philosophy, the mind is treated as an element or medium. The mind of each individual is connected and inhabits a shared space, much like the air we breathe. The health of the sixth chakra significantly influences our mental well-being.

A person with a healthy third eye chakra is a strong analytical and symbolic thinker. They have the ability to recognize patterns and trace connections of cause and effect. They are able to foresee long-term consequences, and they may have prophetic visions of the future. Due to their keen intuition, they are sensitive to their surroundings and to the thoughts and feelings of others.

When your sixth chakra is balanced, you possess a good memory, a powerful mind, and excellent problem-solving skills. Though you have an active imagination, you do not let fantasies disconnect you from your day-to-day reality. Your life choices display brilliance and determination.

A mature third eye chakra makes you wise. You can see that human existence has many layers. It leads to open-mindedness, humility, and an active interest in spirituality.

In her book Eastern Body, Western Mind, Dr. Anodea Judith explains that each chakra has a right and an identity.

The third eye chakra deals with the right to see the world around us and imagine our own future.

It governs our archetypal identity and our need for self-reflection.

Chakras display two distinct types of imbalance: they’re either too open or too closed. This causes the chakra to be either over-stimulated or suppressed. In some cases, a person’s energetic body may oscillate between the two types of imbalance.

A person with an overactive sixth chakra has their head in the clouds. They may suffer from delusions of grandeur, imagining themselves on the brink of a major intellectual, professional, or spiritual breakthrough when reality shows something very different. Their obsession with the realm of visions and dreams causes them to be completely out of touch with the real world. They are “ungrounded” in every sense of the term.

When your sixth chakra is supercharged, it sucks up energy from the lower chakras. You have difficulty living in the moment and keeping up with the basic necessities of life — taking medication, paying rent, or following through on commitments. You drift here and there, unable to focus on a single task. You loathe the idea of a stable, predictable way of living. You may be regularly troubled by nightmares.

An over-stimulated third eye chakra causes you to have fantastic expectations of yourself and others. It can lead to paranoia, schizophrenia, and a chaotic approach to life.

Persons with a deficient sixth chakra are closed-minded and unimaginative. They have a difficult time appreciating beliefs, views, and opinions that differ from their own. Nor do they show much interest in other world faiths or cultures. They may be found on either extreme end of the socio-political spectrum. They have a dogmatic, one-sided way of seeing things.

When your sixth chakra is deficient, you are unable to foresee the consequences of your actions. You aren’t very perceptive of your surroundings, and others may perceive you as insensitive. You fear and avoid that which is unknown to you.

A weak third eye chakra leads to poor memory, boredom, and a shallow way of thinking. It limits your vision and causes you to miss or deny even obvious facts of life.

The chakra system reveals that all illnesses are at least in part psychosomatic. In other words, the condition of your mental well-being and subtle life will always impact your physical health. These are some of the health issues that can arise in a person whose third eye chakra is out of balance:

How to Activate & Repair Your Third Eye Chakra

If you recognize in yourself some of the symptoms of an imbalanced sixth chakra, there are many things you can do to help restore it to balance. Here are some steps you can take to heal your third eye chakra:

Below, we list affirmations which help to strengthen and nourish the sixth chakra. In addition, chanting and meditating on the Sanskrit syllable, OM (pronounced like “home” with a nasal intonation on the “m”) will balance this chakra. You can also try out chakra meditation.

“I honor my intuition.”
“I am not all-knowing.”
“Through humility and prayer, I can access divine guidance.”

About Your Other Chakras