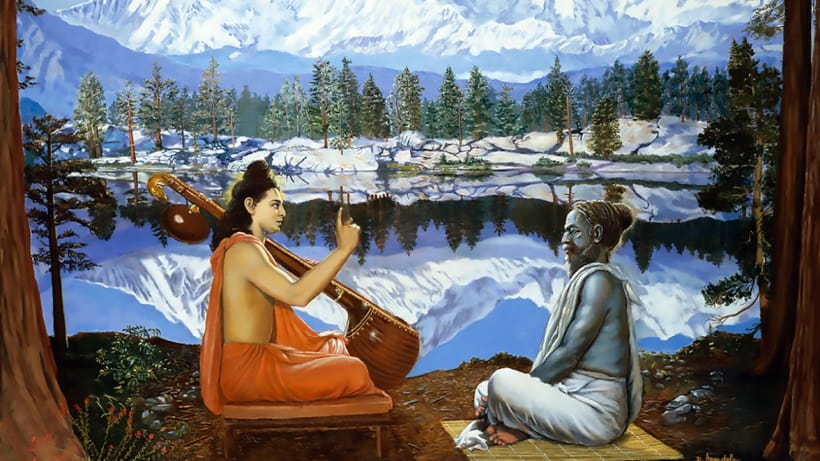 Guru Purnima, also known as Vyasa Purnima, is the lunar holiday marking the anniversary of the birth of Sri Vyasadeva, the compiler of the Vedas. Anyone who is a teacher of the Vedas is a representative of Vyasadeva, and so Guru Purnima is also a special day for honoring any guru in an authorized line of disciplic succession coming from Vyasadeva.

Guru Purnima is celebrated every year on Vamana Purnima, or the full moon day of the month of Vamana. This year it falls on July 23 in the USA and July 24 in India and other parts of the world.

What is a Guru?

Any teacher or elder who imparts wisdom can be considered a guru. In this sense, our parents are our first gurus, as they teach us how to walk, speak, eat, use the bathroom — in so many ways we are indebted to our parents.

However, when Vedas encourage human beings to seek out a guru, they mean a person who is an expert in the spiritual science of bhakti. A true guru has studied the Vedic literatures and applied their teachings in their own life, up to the point of tasting the fruit of yoga — self-realization. Therefore the Srimad Bhagavatam advises:

“Any person who seriously desires real happiness must seek a bona fide spiritual master and take shelter of him by initiation. The qualification of the bona fide guru is that he has realized the conclusions of the scriptures by deliberation and is able to convince others of these conclusions. Such great personalities, who have taken shelter of the Supreme Godhead, leaving aside all material considerations, should be understood to be bona fide spiritual masters.” (Srimad-Bhagavatam 11.3.21)

Not only should a guru be self-realized, or fixed in Brahman, but they should also come in a disciplic line. This shows their authenticity. Just as a professor or doctor needs a degree to teach or practice medicine, a guru must have received training from a bona fide guru, otherwise they cannot be trusted as representatives of Vyasadeva

What Does a Guru Teach?

Gurus are like spiritual role models. Their primary method of teaching is by their own example of spiritual life. This is the conclusion of Krishna in the Bhagavad-gita:

“Whatever action a great man performs, common men follow. And whatever standards he sets by exemplary acts, all the world pursues.”

However, it is also vital that a guru can impart teachings on the various aspects of spiritual philosophy. The Vedas are not merely recreational literature. Their verses contain essential information for developing a healthy and mature outlook on ourselves and the world around us. In order to make quick and substantial spiritual progress, we must learn the principles contained in the Vedas, such as the temporary nature of material existence, the eternal existence of the soul (consciousness), and the soul’s position as a dependent servant of the Supreme (Krishna).

How Can I Find a Spiritual Master?

One of the most influential gurus of the 21st century was A.C. Bhaktivedanta Swami Prabhupada. He founded an international movement to revitalize the spiritual health of the world through the practice of bhakti-yoga.

One of his greatest contributions was his literary legacy, over 60 volumes of precious books of wisdom, including translations and commentaries on the Bhagavad-gita, the Srimad-Bhagavatam, and other important Vedic texts.

The first step in finding a guru is to study the Vedas to learn what a guru is and what it means to be a disciple. If you don’t know what a guru is, then you may end up becoming the disciple of a false teacher, or someone who poses as a guru for the sake of personal profit.

Take time every day to read the Bhagavad-gita and Srimad-Bhagavatam, and then look for other spiritual practitioners in your area who base their lives on the teachings found in these books. Once you find a community of like-minded spiritualists, you will be able to attain steadiness in your own practices of bhakti, and you will become ready to take on the grave responsibilities of discipleship. At that point, Krishna will manifest your guru, the person who can help you attain complete spiritual perfection.

How Should I Celebrate Guru Purnima?

Like any other Vaishnava festival day, Guru Purnima can be observed by complete or partial fasting and an increase in spiritual activities, such as meditating, chanting Hare Krishna, or reading Vedic texts.

It’s also an ideal day for reflection and expressing gratitude to the many gurus you have had in your life, including parents, teachers, and other role models. Even if they are no longer physically present, you can still write them a letter in a journal to share words of thanks. The more we appreciate the gurus of our past, the better situated we will be to recognize the gurus of our future.