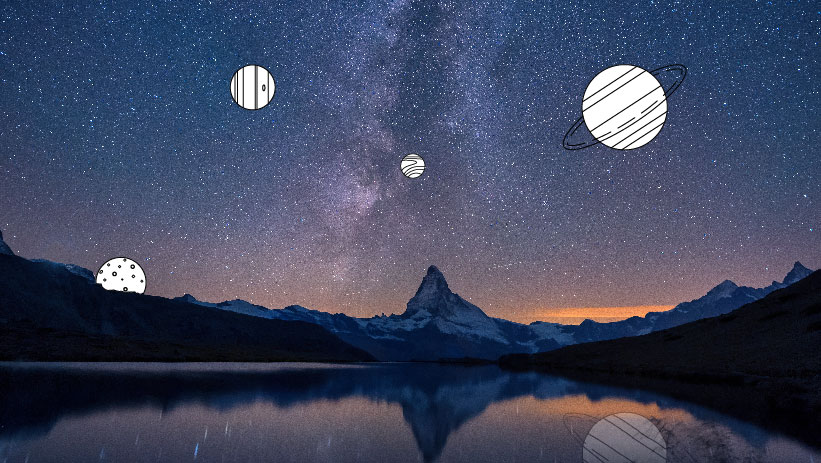 The word “planet” comes from the Greek word planan, which means “to wander.” This refers to the constant motion of the planets through the twelve signs of the zodiac. In Sanskrit, the word for planet is graha, or “to grasp or seize.” It indicates a powerful living force.

The movement of the following nine celestial bodies contributes to the unfolding of major events on earth, and also shapes the fate of each and every individual. Below, we discuss each planet in brief and its role in interpreting an astrological chart.

As the powerhouse that makes life possible on our small planet, the sun has been worshiped in many ancient human cultures for its radiant and rejuvenating qualities. In astrology, the sun is considered the king of the planets. According to Vedic theology, the sun is an expansion of God.

As the leader of the planets, the sun’s weekday is Sunday, the first day of the week. The movement of the sun is also the basis for the Gregorian calendar, which is used by most of the modern world.

The sun travels through the twelve signs of the zodiac exactly once per year, and moves through each sign at the rate of approximately one sign per month.

When reading a chart, the sun represents the following:

Note: In Western astrology, a person’s birth sign is considered to be their sun sign. This is determined by the date of birth. For example, if you were born between July 23 — August 22, you’d be considered a Leo.

If the sun is the king of the planets, then the moon is like a queen. Its beautiful glow provides light in the nighttime. In many ancient cultures, the moon was viewed as a goddess and was believed to have a connection with fertility. Traditionally the moon has also played a vital role in agriculture. For millennia, humans have timed their tilling, planting, and harvest with the phases of the moon’s waxing and waning. In Vedic theology, the moon is a manifestation of the mind of God.

The moon’s weekday is Monday. The movement of the moon is the basis for all lunar calendars, which are still used in many cultures, including Hinduism, Islam, and Judaism.

As the fastest moving of all the planets, the moon travels through the twelve signs of the zodiac in just over 27 days. It spends approximately two days and six hours in each sign.

When interpreting a chart, the moon represents the following:

Note: In Vedic astrology, a person’s sign is considered to be their moon sign. This is calculated according to the exact position of the moon at the time of birth. For example, a person born at midnight in Paris on September 2, 2040, would be a Gemini, because that is the sign the moon will be traveling through at that time.

Continuing our analogy of the planets as a royal court, Mars would be the war general. Throughout history, this planet has consistently been associated with masculinity and power. In Roman times, Mars was worshiped as the god of war. This tradition had its roots in the Puranas of Vedic India, which portray Mars as the deity of war and fire. The ancient Chinese similarly saw Mars as an indicator of tragedy and bloodshed. In English, the word “martial” derives from the name of this militant planet.

Mercury is like the prince of the royal planetary family. He is as precocious as he is capricious. In Roman times, Mercury was worshiped as the god of communication and commerce. The name of this planet comes from the Latin word merx, or merchandise. In English, the word “mercurial” refers to someone who is spontaneous and unpredictable. This accurately sums up Mercury’s personality. The Sanskrit name for Mercury is Budha, meaning one who is clever or intelligent.

Mercury’s day of the week is Wednesday, known in Latin as “Mercurii.” Similarly, the popular name for Wednesday in Indian cultures is Budhavar, or the day of Budha.

Mercury travels through the twelve signs of the zodiac in 88 days. He spends about seven days and eight hours in each sign.

When looking at a chart, Mercury represents the following:

Jupiter’s weekday is Thursday, known in Latin as Jovis, or the day of Jupiter. In Sanskrit, Thursday is known as Guruvar, or the day of the Guru, Brhaspati.

When analyzing a chart, Jupiter represents the following:

In Vedic theology, Venus is known as Shukracharya, the teacher of the godless. Ancient Romans worshiped Venus in the form of a goddess, and viewed her as the empress of desire, sex, and sensuality. The name Venus comes from the Latin word for sexual love, and it is traceable back to the Sanskrit word vāñchā, meaning longing or desire.

Venus is slower than Mercury but faster than Mars. It completes a cycle of the zodiac in about seven months and 15 days, and passes through each sign in 18 days and 18 hours.

When reading a chart, Venus represents the following:

If the sun is the king of the planets, then Saturn is the commoner. In Roman culture, Saturn was worshiped as the god of dissolution, renewal, and the passage of time. During the annual festival of Saturnalia, slaves would exchange roles with their masters. Commoners would dine like nobility, and they would freely voice any criticism or complaints they had from the previous year. In Vedic theology, Saturn, or Shani, is feared as the bestower of karmic reaction, the good or bad results of one’s past activities.

Saturn’s day of the week is — you guessed it — Saturday. Known in Latin as Saturni, and in Sanskrit as Shanivar.

Saturn is also known as Manda, or the slow one. As the slowest-moving of the planets, he travels through the zodiac only once every 29-and-a-half years. Saturn spends almost two-and-a-half years in each sign.

Note: Saturn’s movement through the zodiac creates a period known as “sade sati,” or Saturn’s Grind. This occurs whenever Saturn passes over a person’s birth sign, as well as the signs before and after it.

In an astrological reading, Saturn represents the following:

Rahu is unique to Vedic astrology and does not have an equivalent in the Western approach. From an astronomical perspective, Rahu is known as the North node of the moon, or the point where the moon’s northward path intersects Earth’s ecliptic plane. When the sun, moon, earth, and Rahu are all in alignment, and the moon is either a full moon or dark moon, then eclipses occur.

In eclipse lore around the world, the event of an eclipse nearly always implies a “disruption of the established order,” in which a malevolent celestial being attempts to devour the sun. For instance, in ancient Chinese culture, it was believed that eclipses were caused by a sky dragon who wanted to swallow the sun. In Vietnamese culture, it was a massive toad; in some Native American cultures, it was a giant bear; in Egypt, it was a celestial serpent; and in Norse mythology, a pair of wolves chased the sun and moon, and when they caught up with either one, an eclipse occurred.

These various stories seem to stem from the Vedic Puranas, wherein the demon Rahu, the lunar node, is described as a disembodied head who periodically swallows the sun and moon. However, the sun and moon quickly escape through the hole at the base of Rahu’s neck.

Considered to be an outcaste among the planetary bodies, Rahu does not have it’s own weekday.

As the second-slowest planet, Rahu revolves around the zodiac in 18 years, seven months, and nine days. Rahu spends approximately 18 months and 18 days in each individual sign.

When interpreting a chart, Rahu represents the following:

Like Rahu, Ketu is not included in the practice of Western astrology. Ketu’s position is calculated at the moon’s South node, or the point where the moon’s southward path crosses the earth’s ecliptic.

In the Puranas, Ketu is described as the headless body of the demon Rahu after he is decapitated by the Goddess Mohini, a female avatar of Lord Vishnu.

Similar to Rahu, Ketu does not have a day of the week.

The position of Ketu in the zodiac is always exactly opposite that of Rahu. They revolve at the same pace, as an inseparable pair. Ketu moves through the twelve signs in 18 years, seven months, and nine days, spending about 18 months and 18 days in each individual sign.

When looking at a chart, Ketu represents the following: