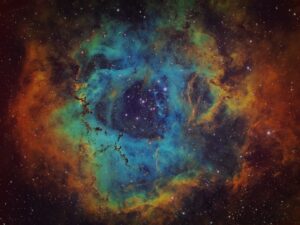 Vedic cosmology is one of five primary topics addressed in ancient Sanskrit histories known as Puranas. This includes (1) universal creation by the Superconsciousness (Vishnu), and (2) subsequent creation by Superhuman beings (chiefly Brahma).

Vedic cosmology is a vast science with a comprehensive understanding of our universe that far surpasses the views currently presented by modern science. If you’re tempted to write off Vedic cosmology as mere mythology, you should first consider the following:

In this way, the universal timeline of Vedic cosmology closely matches the timeline of modern science. In addition, the Puranas accurately describe many, many other scientific phenomena that have only recently been understood in contemporary scientific circles, such as:

Billions of dollars and trillions of hours went into these scientific discoveries, each of which was viewed as ground-breaking in its time. But all of this information has been known to the sages of ancient India since many millenia, long before the technological advancements took place which enabled contemporary scientists to achieve these discoveries through arduous research and experimentation.

LEARN MORE: Author Sidharth Chhabra has extensively documented the many scientific proofs for the accuracy and reliability of the Puranic record in his book, The Big Bang and the Sages.

Life On Other Planets

The Puranas describe a universe teeming with a variety of life. This goes against the notion that our human race is the only sentient life in space. In the Bhagavad gita it is said that living beings are sarva-gataḥ — they are everywhere. As consciousness, not matter, is the fundamental building block of all existence, it makes sense that conscious life would be found all over the universe.

On this planet earth, lifeforms have been found in even the most extreme of conditions:

The Puranas describe our universe as consisting of three major planes, which are divided further into fourteen subdivisions. Each region of the universe is inhabited by different types of living organisms that possess a body suitable for their environment.

The Puranas were compiled by residents of the upper realms within our universe, who inhabit a multi-dimensional existence much more rarefied and technologically sophisticated than our planet earth

Taking the plane of the ecliptic and extending it to the edge of our solar system, the Puranas describe that our Earth planet sits within the universe in the middle of these fourteen sub-planes, with six higher realms and seven realms below.

In the famous TV series Cosmos, astronomer Carl Sagan admits that the Vedas of India are the only ancient text “in which the time scales correspond to those of modern scientific cosmology.” In addition, the well-known Harvard professor Alan Watts applauded the Vedic point of view for its advanced concepts in physics and space-time:

“To the philosophers of India, however, Relativity is no new discovery, just as the concept of light years is no matter for astonishment to people used to thinking of time in millions of kalpas.”

Brahma is the first created being within the universe. He is like the CTO of the cosmos, and he possesses a body composed of information. Brahma is given a blueprint for creation by Vishnu, and based on this information he proceeds to create the universe, in accordance with natural laws.

Due to time dilation, Brahma has an experience of time that vastly differs from that of people on Earth. The life span of Brahma is a mere 100 years, and yet these 100 years last 333 trillion years of the human race. Each day of Brahma is 4.32 billion of our human years, or the equivalent of 1,000 kalpas, also known as yuga cycles. At present we have recentlIn the Bhagavad gita, we find a brief description of Brahma and his role in the unfolding of the universe:

“By human calculation, a thousand ages taken together form the duration of one day of Brahma, and such also is the duration of his night. At the beginning of a day of Brahma, all living entities become manifest from the unmanifest state, and thereafter, when the night falls, they are merged into the unmanifest again. Again and again, when the onset of a day of Brahma arrives, all living entities come into being, and with the arrival of Brahma’s night they are helplessly annihilated.” (Bhagavad gita 8.17-19)

The Fourteen Sub-planes of Our Solar System

The Bhagavata Purana provides a detailed account of how Brahma divides our solar system into fourteen layered planes of existence, or lokas, for the various forms of life. Our Earth planet sits in the middle, and there are six planes above and seven below. Below is a top-down view of the fourteen lokas:

Satya-loka: This is the plane of existence of Brahma and other highly elevated beings.

Tapa-loka: This is the plane directly below Satya-loka, which is home to perfected yogis.

Jana-loka: On this plane reside the sons of Brahma who are all great sages.

Mahar-loka: This is the plane below Jana-loka, which is also home to great sages, mystics, and teachers of religion. Residents of this plane regularly descend to our Earth planet to instruct human beings in religious principles.

Svar-loka: The beings on Svar-loka, also known as Svarga, include the devatas, or demi-gods who serve as administrative heads of various departments within the solar system. There are numerous planets within this region and the residents enjoy a standard of life thousands of times more pleasurable than the richest people on Earth.

Bhuvar-loka: This is the plane inhabited by departed spirits who lacked the merits required to enter the heavenly realm of Svar-loka. Nonetheless, Bhuvar-loka is more elevated than our plane of Bhur-loka — planet Earth and its neighboring worlds. As such, there is far less suffering for the pious souls who take birth on Bhuvar-loka.

Bhur-loka: This plane of existence includes our Earth planet as well as many similar worlds.

Atala-loka: This is the first sub-plane below the earthly plane. The residents of Atala also experience an intensified grade of sensual pleasure, like the residents of Svarga. They have mystic powers and practice a type of black magic.

Vitala-loka: Below Atala is Vitala-loka, where ghosts and other frightening creatures reside.

Mahatala-loka: This realm is inhabited by snake-like humanoids who are expert in the art of concocting potent intoxicants.

Rasatala-loka: Rasatala is home to the Daityas, the enemies of the Demi-gods. They are powerful beings who live according to the philosophy of “might is right.”

Patala-loka: This is another plane inhabited by the snake-like nagas who enjoy intoxicating drinks and other substances far more effective than what is available on our Earth planet.

Vedic cosmology describes that beyond this mundane universe is the spiritual universe of Vaikuntha. There we find a similar hierarchy of planets and variety of living beings, but the difference is that everyone accepts the preeminence of Vishnu and happily serves Him, recognizing Him as the source of all consciousness and manifest reality.

Unlike the endless cycle of creation and destruction of the material cosmos, the Vaikuntha planets are eternal. The inhabitants there never experience birth, disease, old age, or death. This is the chief distinction between matter and spirit. Matter is temporarily manifested only to be destroyed, but spirit is eternal. The creation of the cosmic universe and its eventual annihilation mirrors the creation and destruction of the individual body inhabited by the spirit soul.

The Bhagavata Purana and other Vedic texts reveal that the spiritual universe of Vaikuntha contains unlimited spiritual planets, each headed by a form of Vishnu who is adored and worshiped by the planet’s inhabitants. The competition for power, influence, and fame that goes on here on Earth is an attempt by the living being to imitate the all-powerful status of Vishnu. However, such attempts are always doomed to fail, for the living being cannot withstand the force of time, culminating in death.

Beyond this unlimited spiritual universe filled with Vaikuntha planets, at the very apex of existence, is the spiritual planet of Goloka Vrindavana, home to the original Superconscious person, Sri Krishna. According to the Vedas, Krishna is the ultimate origin of Vishnu, and in Goloka Krishna enjoys supremely sweet activities of love with His many devotees

The Puranas contain many historical accounts of the history of our universe. The following articles provide information about the four Puranic ages: Satya Yuga, Treta Yuga, Dvapara Yuga, and Kali Yuga.