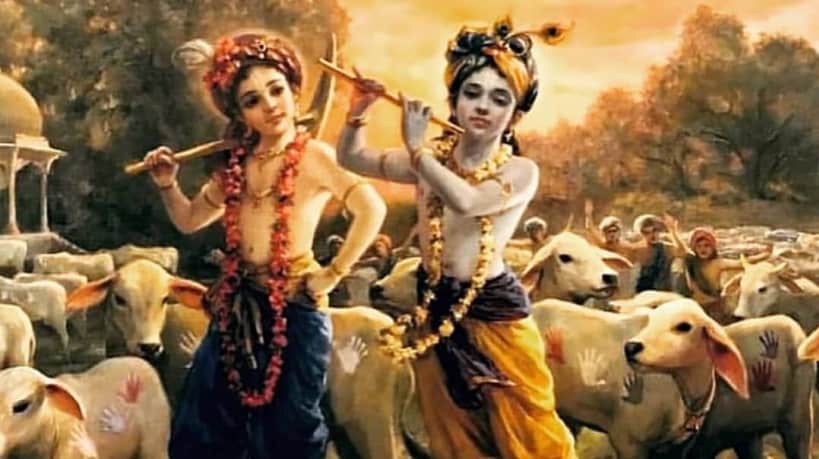 Dvapara yuga is the bronze age, a time when humanity’s social systems begin to break down and the principles of righteousness start to weaken. In this article we discuss the prominent avatars of Dvapara Yuga. The Supreme Divinity Sri Krishna appears in unlimited different forms. The Vedas say the Absolute Truth is non-dual, advitīyam. However, that Absolute Truth expands into many for the purpose of enjoying loving relationships. The Bhagavata Purana confirms: bahu-mūrty eka-mūrtikam. “The Supreme Source is One, although appearing in many varieties of forms.”

An Overview of Dvapara Yuga

After Dwapara Yuga comes Kali Yuga the age of darkness, when spirituality is eclipsed by selfishness and dogmatic materialism. While Sri Krishna remained on the planet, Kali Yuga could not begin. The reason is that the presence of the Supreme Person keeps ignorance and irreligion at bay. As the Vaisnava poet Krishnadasa has written:

“Krishna is compared to sunshine, and māyā [illusion] is compared to darkness. Wherever there is sunshine, there cannot be darkness. As soon as one takes to Krishna consciousness, the darkness of illusion will immediately vanish.” (Caitanya-caritamrta, 2.22.31)

However, shortly after the departure of Sri Krishna to His own realm in the spiritual sky, Kali Yuga broke out in full force. The social order was turned on its head. Instead of educating and protecting the populace, religious and political leaders abandoned virtue and became the chief criminals in society.

In Kali Yuga, or the Iron Age, spirituality and morality are diminished to shadows of their former selves. Deception and hypocrisy in the name of religion is the status quo. The only process of dharma that is still practiced and effective is nama-sankirtana, or chanting the names of God, especially the maha-mantra: Hare Kṛṣṇa, Hare Kṛṣṇa, Kṛṣṇa Kṛṣṇa, Hare Hare/ Hare Rāma, Hare Rāma, Rāma Rāma, Hare Hare.

As the Dark Age, Kali Yuga is the polar opposite of the Golden Age, Satya Yuga. During Kali Yuga, the world is virtually devoid of peace. All living beings suffer material hardships as they struggle simply to survive, being deeply afflicted by fear.

In Kali Yuga, people live up to only 100 years. The Bhagavata Purana describes human beings of Kali Yuga as follows:

“In this iron Age of Kali men almost always have but short lives. They are quarrelsome, lazy, misguided, unlucky and, above all, always disturbed.” (Srimad Bhagavatam, 1.1.10)

The Avatars in Dvapara Yuga

You may be wondering: what exactly is an avatar? The Sanskrit word avatara means one who comes down. An avatar is a manifestation of the Supreme Person, Krishna, who comes down to our universe to perform a specific task. There are different types of avatars mentioned in the Vedas. As an actor may wear a unique costume for each of the various roles they play, Krishna similarly adopts many different forms in His various incarnations, or avatars. In every yuga cycle, or chaturyuga, there are ten prominent avatars known as the Dashavatar. Of these, two appear in Dvapara Yuga: Krishna and Balarama. There is also another important avatar known as Vedavyasa.

Sri Krishna is known as the avatarī or Fountainhead of all Incarnations. Krishna is the original personality of Godhead, and all the various avatars are His different forms. Krishna’s life and pastimes are the main topic of the Bhagavata Purana. He appears as the son of Devaki and Vasudeva. Shortly after the wedding of Devaki and Vasudeva, Devaki’s evil cousin, Kamsa, heard a prophecy that Devaki’s eighth son would kill him. Terrified, Kamsa immediately attempted to kill Devaki, but Vasudeva talked him out of doing so. Instead, Kamsa put Devaki and Vasudeva in prison. Each year when Devaki would give birth to a child, Kamsa would kill it, fearing it was somehow the one who was destined to kill him. When Devaki became pregnant for the eighth time, her body became effulgent. Everyone could tell that the Supreme Lord had appeared within her womb, even Kamsa. On the night of His birth, Krishna appeared in the prison in His four-armed form. Devaki and Vasudeva both offered prayers, and then Vasudeva took Krishna to safety at the home of his friend Nanda in a village named Vrindavan. Krishna grew up in Vrindavan playing the role of an ordinary cowherd. He played with His friends and delighted His parents with His charming pastimes. When Krishna came of age, Kamsa discovered His whereabouts and invited Him to Mathura for a wrestling match, intending to kill Him. However, Krishna easily defeated the evil Kamsa, restoring order and justice to the kingdom. As an adult Krishna married 16,108 wives. He had a palace built for each and every one of them, and He expanded Himself into 16,108 identical forms so as to be present in each palace, playing the role of a perfect husband and father.

Read more about Krishna, the Supreme Personality of Godhead, in the Bhagavata Purana

Balarama is an expansion of Krishna who always serves Krishna as His elder brother. During Krishna’s youth in Vrindavan, He and Balarama are inseparable. They grow up together tending the cows and playing with Their friends. Balarama is the first expansion of Krishna, and it is through Balarama that all other expansions, or avatars, manifest. For this reason Balarama is also known as the Second Personality of Godhead. He is the original spiritual master, setting the topmost example of service to Krishna. All genuine gurus are representatives of Balarama in service to Krishna.

Read more about Lord Balarama in the Bhagavata Purana

Vedavyasa, also known as Vyasadeva, is an avatar of Krishna who appears in every Dvapara yuga as the compiler of the Vedas. Originally the Vedic literature was passed down orally. In previous ages, before our present Kali yuga, human beings possessed a far greater power of memory. This enabled them to memorize entire texts of up to hundreds of thousands of verses. However, due to the degrading influence of the age of Kali, such a feat is no longer possible. Foreseeing this difficulty, Vyasa compiled the Vedas in a written form, giving a special prominence to the Puranas and Itihasas, the explanatory histories which clearly elucidate the main teachings of the Vedas. Today we have access to such important Vedic texts as the Bhagavad-gita, the Mahabharata, and the Bhagavata Purana thanks to the efforts of Sage Vyasa.

Read more about Vedavyasa in the Bhagavata Purana