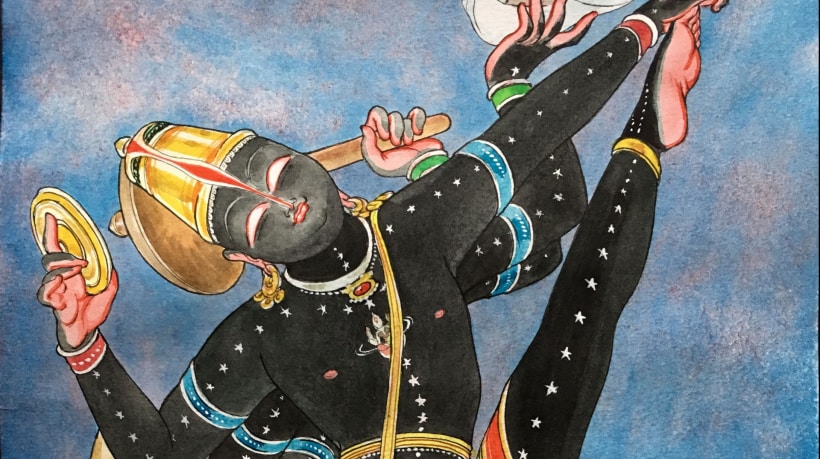 The Supreme Divinity Sri Krishna appears in unlimited different forms. The Vedas say the Absolute Truth is non-dual, advitīyam. However, that Absolute Truth expands into many for the purpose of enjoying loving relationships. The Bhagavata Purana confirms: bahu-mūrty eka-mūrtikam. “The Supreme Source is One, although appearing in many varieties of forms.”

In this article we discuss the prominent avatars of Kali Yuga.

An Overview of Treta Yuga

In Treta Yuga, the Silver Age, human beings engage in nonviolent religious sacrifice as a means of propitiating the gods and ultimately pleasing the Supreme Person, Vishnu. As Lord Krishna instructs Arjuna in Bhagavad-gita:

“In the beginning of creation, the Lord of all creatures sent forth generations of men and demigods, along with sacrifices for Viṣṇu, and blessed them by saying, ‘Be thou happy by this yajña [sacrifice] because its performance will bestow upon you everything desirable for living happily and achieving liberation.’”

“The demigods, being pleased by sacrifices, will also please you, and thus, by cooperation between men and demigods, prosperity will reign for all.” (Bhagavad-gita, 3.10-11)

In order to facilitate collective sacrifice, human society was divided into four classes of men: brahmanas (intellectuals), kshatriyas (administrators), vaishyas (merchants), and sudras (workers). The brahmanas studied the Vedas and guided society with spiritual wisdom, the kshatriyas served as rulers, politicians, and army generals, the vaishyas worked in commerce and industry, and the sudras served the other three classes. However, there was not a spirit of envy or condescension among the four classes. Rather, each member of society sacrificed for the good of the whole and for the satisfaction of Sri Vishnu.

In Treta yuga, human beings were extremely dutiful, moral, and compassionate toward their fellow living beings. They lived life spans up to 10,000 years. Although there was some division among society, it was nevertheless a time of overarching peace and prosperity.

The Avatars in Treta Yuga

You may be wondering: what exactly is an avatar? The Sanskrit word avatara means one who comes down. An avatar is a manifestation of the Supreme Person, Krishna, who comes down to our universe to perform a specific task. There are different types of avatars mentioned in the Vedas. As an actor may wear a unique costume for each of the various roles they play, Krishna similarly adopts many different forms in His various incarnations, or avatars. In every yuga cycle, or chaturyuga, there are ten prominent avatars known as the Dashavatar. Of these, three appear in Treta Yuga: Vamana, Parashurama, and Rama.

Also known as the Dwarf Incarnation, Vamanadeva is the fifth of the Dashavatar. He appeared in Treta Yuga to take back the heavenly realm from King Bali and his demonic army. He also rescued Shiva from the wicked Vrikasura. King Bali, the grandson of Prahlada, once performed many Vedic sacrifices in order to become a powerful warrior. Upon completing the yajnas, Bali took his army to conquer Indra’s heavenly kingdom, Svarga. Bali had been blessed by Vedic priests and was virtually invincible. Indra fled his kingdom along with his wife and associates. Indra’s mother, Aditi, was greatly saddened by the situation. She wanted Vishnu to come and defeat Bali and reinstate her son on the throne of heaven. Aditi approached her husband, Kasyapa, and asked him to bless her so that she could have a very powerful son. In fact, she wanted none other than the Supreme Person, Vishnu, as her son. After some time, Vishnu appeared from the womb of Aditi as the Dwarf Incarnation, Lord Vamana. Vamana immediately manifested his eternal form and proceeded to the sacrificial arena in Svarga. There he met King Bali. Bali stood up and warmly received Vamana, offering to give Him charity. Smiling, Vamana said, “My dear king, please let us have only three paces of land.” When Bali agreed to this proposal, Vamana assumed a gigantic form and covered the entire universe in just two steps. Thereafter, being a devotee of Vishnu, Bali invited Vamanadeva to place His third step on Bali’s own head. Thus Vishnu conquered and won back the heavenly realm of Svargaloka for the demigods.

Read more about Vamana Avatar in the Bhagavata Purana

Parashurama is one of the most fearful avatars. He appears as a warrior and repeatedly kills off twenty-one generations of wicked, power-hungry kings. Once, when he was a boy, Parashurama’s father, Jamadagni, became so upset with his wife and other children that he asked Parashurama to kill them. Parashurama knew that his father had developed mystic powers due to his many years of austerity and meditation. “If I don’t kill them, then surely Father will,” He thought. Then He realized that if He killed them out of obedience, His father would be pleased and would give Him a benediction. Parashurama thought He would then be able to use that benediction to regain the lives of his mother and siblings. Sure enough, after Parashurama killed his family members, Jamadagni blessed Him with a boon, and Parashurama requested that His father restore His family to life. Parashurama is also famous for defeating the invincible warrior, King Kartaviryarjuna.

Read more about Parashurama Avatar in the Bhagavata Purana

One of the most famous of the Dashavatar, Lord Rama appears as the Supreme Being in a human form. He is the son of King Dasaratha and Kaushalya, and He appears in order to defeat the wicked Ravana. In His youth, Rama is invited by the sage Visvamitra to assist him in killing a number of rakshasas, or man-eaters. Rama and His brother, Lakshman, both travel with Visvamitra, and during this time Rama learns how to invoke many different mystic weapons and mantras. Rama also wins the hand of Princess Sita in a dramatic competition by breaking a gigantic bow that formerly belonged to Lord Shiva. However, shortly after Rama returns to His father’s palace, there is a conspiracy that results in His banishment to the forest for fourteen years. Rama reluctantly allows Sita and Lakshman to come with Him, and the trio travels far away from the kingdom to live in complete seclusion. After some time, Sita is abducted by Ravana, and Rama must rally an army to find her whereabouts and rescue her. After many challenges, He finally locates Ravana’s kingdom and kills him, reuniting with His beloved Sita.

Read more about Lord Ramachandra in the Bhagavata Purana