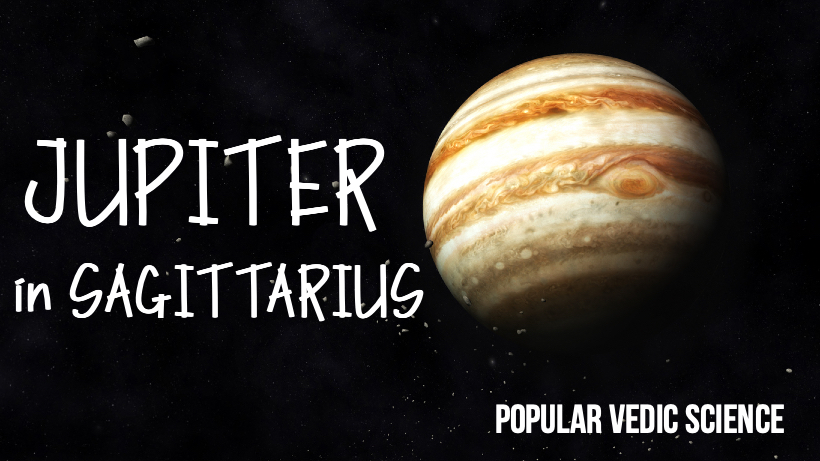 Sagittarius is the ninth sign of the zodiac. In Vedic astrology, Aquarius is known by the Sanskrit name dhanus, or “the archer.” The sign of Sagittarius possesses a righteous, noble, and passionate nature. Sagittarius is a sign of good fortune. In an astrological chart, it indicates areas where you are religious and devoted in your efforts.

Traits of Jupiter in Sagittarius

The influence of Jupiter in a birth chart will change depending on which house it is located in, its relative position in relation to other planets, as well as other factors. However, the following general traits are likely to be found in a native who has Jupiter in Sagittarius:

You give freely. Jupiter is the noblest planet among the nava-graha, or the nine planets that influence the birth chart in Vedic astrology. Sagittarius is one of two signs ruled by Jupiter, so for those who have Jupiter in Sagittarius in their native chart, the influence of this benevolent planet is further enhanced. You enjoy doing good deeds and giving to others, including sharing your time, your resources, and your affection.

You are likely to be in charge. As a noble-minded person, others naturally look up to you and trust you. For these reasons, you often find yourself in positions of leadership, whether you seek them out or not. You can have a positive influence by others if you act with integrity, keep your word, and follow ethical codes of conduct found in wisdom literatures like the Bhagavad-gita.

You are fortunate. You are one of the lucky ones. You likely took birth in an upper-middle-class or upper-class family, and you have more resources available to you than the average person.

You engage in activism. You believe in basic human rights and strive to help those who are less fortunate than you are. You fight for the causes you believe in, and you aspire to leave a meaningful legacy behind you when you die.

You are religious. Of all the signs, Sagittarius is the most likely to engage in devout religious practice. In the modern day, this doesn’t always manifest as one of the mainstream Abrahamic faiths. Religion comes in all shapes and sizes — some being just one’s own personal set of rules and codes for life. Nonetheless, you are very serious about how you live and the impact your life has on those around you.

Jupiter in Sagittarius in the 12 Houses

The first house indicates physique and self-expression. You are a saintly person devoted to God consciousness. You will live a fortunate and happy life. You will do many good works for the sake of others.

The second house indicates wealth and cultural traditions. You possess a brilliant mind. You enjoy researching and learning about history, science, religion, philosophy, and all kinds of various subjects. You are physically attractive, and people find you charming and eloquent.

The third house indicates siblings, courage, and literary works. You travel often and may be a writer. You have a keen eye for aesthetics and art. You are very expressive and may do well in communications, entertainment, politics, or any role that leverages your strong speaking and rhetorical skills.

The fourth house indicates one’s mother, home, and basic beliefs. You will be very happy throughout life. You have a loving family, and you are especially close with your mother. You will have a lucrative and promising career.

The fifth house indicates children, creative works, and overall success. You may work in the government or in an executive position at a company. You will make good money and may also earn extra income through wise investments. You are an optimist and others find you charismatic and exciting to be around.

The sixth house indicates debt, disease, and service. You may are likely to have an interest in mysticism and tantra. However, be wary of pursuing such things for the net result is misery. Real spirituality doesn’t involve superhuman powers, but a pure heart and devotion to God. You may become famous, but you will suffer due to opposition from others.

The seventh house indicates the spouse, marital happiness, and sexual desire. You are witty, and friendly. You are a talented speaker and writer. You may even have talent for writing poetry. However, you are likely to be too attracted to romantic pursuits, and this may cause you trouble.

The eighth house indicates death, calamities, and interest in the occult. You like to travel, especially to spiritual places. You may spending most of your time serving or assisting others rather than pursuing your own initiatives. You will likely be dissatisfied in your marital life. Be wary of lending large sums of money to friends.

The ninth house indicates religion and morality. You are self-sacrificing, and may be attracted to a life of spirituality and renunciation as a monk or yogi. If you do choose to have a family and children, you will derive great happiness from them. You will be well-known both in your professional and personal circles.

The tenth house indicates one’s father, career, and reputation. You are ambitious, and you have a high trajectory in life. You can achieve success in practically any undertaking. You are close with your parents and your peers admire and respect you. You will live a noble and fulfilling life.

The eleventh house indicates gains, aspirations, and friendships. You will be very wealthy. You have many wonderful ideas, and may be drawn to a career as a researcher, inventor, or consultant. You are a natural networker and you can advance with the help of your friends. You care about your health. You steadfastly pursue your goals.

The twelfth house indicates losses, misfortune, and liberation. This is a challenging position for Jupiter. You struggle to keep your integrity at times, and you may end up acting against your better judgment. This brings you shame and disrespect from those who know you. You are likely to travel frequently. Be courteous toward those around you so that you don’t cause them undue difficulty.

Famous People with Jupiter in Sagittarius